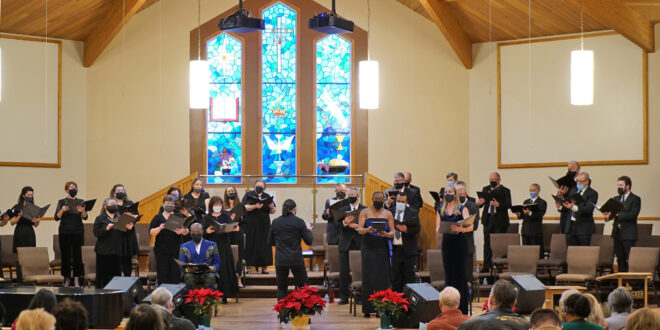 This is the second collaboration between Syracuse Opera and Tucker Baptist Missionary Church organized to help make opera available to all. | Provided Photo

Opera singer Gregory Sheppard, who I’ve written about before in this column, has been working really hard behind the scenes with the Syracuse Opera to bring communities together through the medium. His strategy aims to introduce opera to the Black community by presenting it in predominately African-American settings, but by virtue of the process, brings its mostly white supporters to the Black community.

Bonds was a classically trained composer of the early-mid 20th century. She became enamored with the writings of Langston Hughes, a Harlem Renaissance writer, and began setting his literary works to classical music. “The Ballad of the Brown King” was one of the many works written by Hughes that she transformed.

The story is about one of the three Wisemen of the Bible who presented their gifts at the birth of Jesus. One of the three, King Balthazar of the Magi, was a brown man. Hughes being an African-American with strong racial pride wrote beautifully about this and numerous other pieces that highlighted the strengths of the people of his race.

Sisters Ava Andrews and Marcia Hagan were two of the local singers that had an opportunity to perform in the opera’s choir.  “All kudos to Greg,” Ava said. “Greg is the one that brought all of this together today. My sister and I have had the opportunity many times to sing with the opera over the years. We were a part of ‘Project 2000,’ ‘Women in Blues,’ ‘Frederick Douglass’ and many others. Greg brought this back to us.”

Tucker’s Choir Director Eric Dickson also played a part. He had an opportunity to conduct the opera on a song by Kirk Franklin called “Now Behold the Lamb.”

“I wanted to bring a little soul to the opera while still maintaining its operatic flare.”  Decarto Draper, Sandra Dee Miller and Marica Hagan, all from TMBC, and Jeremiah Abiah had solo parts.

“This is part of a series,” Greg noted. “There are more planned for 2022 and beyond, which we will be bringing to the church.”

“When we remodeled the church a few years ago, we had this type of thing in mind,” he said. “It is why we rebuilt the pulpit area in a way that these types of performances can be accommodated, and this is good way to bring our diverse Syracuse population together.”