David Etse Nyadedzor believes it is important that the messages one expresses through music be positive. In his view, “music is a powerful medium that can carry a message farther than anything.”

David, 43, is from Accra, Ghana. He has lived in the United States for about 14 years now. He speaks five languages fluently, including English, which he has spoken since childhood. His ethnicity is Ewe. 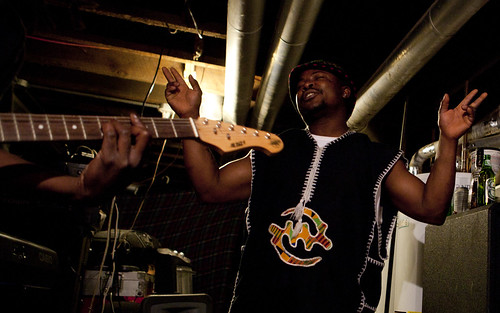 The Ewes are the second-largest ethnic group in Ghana after the Ashanti. When referring to his ethnic group, he prefers not to use the word “tribe” because he feels the word has been associated with being primitive. He explained that the so-called “tribes” are really just different ethnic groups.

According to dictionary.com, “ethnic” refers to a group “sharing a common and distinctive culture, religion, language, or the like.” David, therefore, prefers to use the word “ethnicity” when he refers to the Ewe, Ashanti, Ga, Fanti, Akan and others.

David was introduced to music as a young lad. In Ghana, many of his relatives and members of his community performed traditional music and dance, so it has always been a part of life.

In Ghana, boys learn how to drum at a very young age, usually from an older, experienced male, she said. Vanessa is a Griot, and she is married to a Ghanaian. 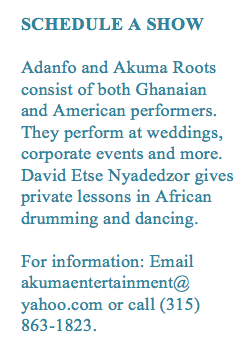 “David connects with all ages and races of people through his drumming,” she said. “He teaches people how to identify the natural pulses that we all have which are our heartbeats. Then he shows them how to transfer that rhythm to the drum. When everyone is connecting on that at one time, it is almost spiritual.”

In Ghana, the community ensembles would always perform traditional songs and dances specific to their own ethnicity. The songs were always positive and filled with meaning. But throughout his time in the United States, David has witnessed a lot of the negativity that has infected the content of popular American music. He realizes American pop culture does not reflect all cultures, and he believes he can present a positive alternative by sharing traditional African music, drumming and dance. He describes his mission as “bridging cultures through music.”

David is carrying out this mission as the leader of two performing groups — Adanfo and Akuma Roots. He sings in both of them, and he also plays the djembe.

Adanfo is primarily a traditional African drumming and dance group. The group performs traditional songs in full costume and uses authentic instruments that David’s brother and other family members make and send from Africa. He uses the fontomfrom and atoumpan, two instruments traditionally used only in the presence of royalty. 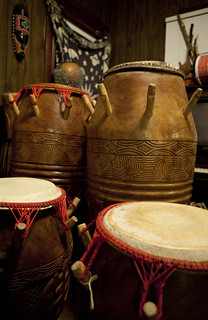 A drum collection can be seen in David Este Nyadedzor's basement in Syracuse where his bands Akuma Roots and Adanfo regularly practice. -- Allison Milligan, Staff Photo

Akuma Roots is more like a mainstream American band with a little twist — it has a few assorted African drums in the mix. The band’s instruments include a bass, drums, keyboards, guitar, djembe and other African drums. The music is a blend of reggae and African rhythms. The sound is raw but incredibly relaxed and controlled, while at the same time funky. Akuma Roots performs mostly original material with positive messages.

David invited a photographer and me to his home to hear Akuma Roots rehearse and to meet the band members. Upon our arrival, we were warmly greeted by members of his family — including two of his children, ages 2 and 4 — and the sound of classical music playing on the stereo. David showed us pictures of his instrument collection. Then, he and band member Josh Williams brought us to the basement, where the band rehearses. There, we met the rest of the band: Yao “Cha Cha” Fola, Pierre Mensah, Tucker D. and Eric Ansuade. Fellow member Faheim “Fa Fa” Faheim was not there at the time.

The band has enough material to complete two albums, but the members have not made it into the studio yet to record. David’s plan is to record soon.