It’s been considered the coldest month of the year. I don’t doubt it considering last February presented all-time cold temperatures for many U.S. cities. One city in New York state averaged just under 11 degrees for the entire month. Yeah, that’s cold.

But February is also the warmest month of the year metaphorically speaking. It is the month that Black History is celebrated. For many blacks, it is a month of pride and acclaim. February is a month when the world’s citizens direct their collective attention upon the U.S. and Canada to gain a better understanding of the contributions blacks have made to better the human experience. 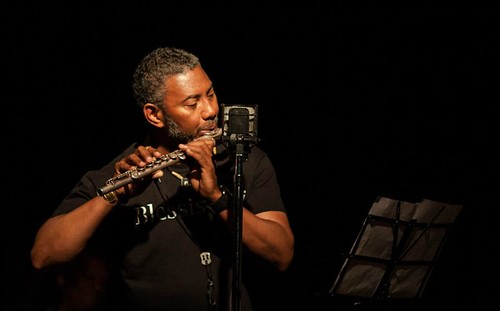 It has been a tradition since Dr. Carter G. Woodson began it in 1926 with Negro History Week. Blacks have made contributions in the arts, education, sciences, politics and humanities, so numerous if one were to light a candle for each it would bring February to a boil.

Al’s Wine & Whiskey recognizes that. Al’s will be participating in the month-long celebration by welcoming Dr. Alphonso Sanders to entertain one night with his mix of blues and jazz. 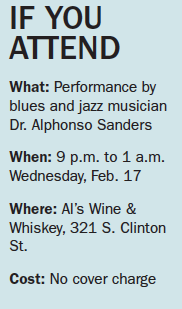 Sanders is a multi-instrumentalist who performs primarily on the tenor saxophone but flavors his blues with a little blues-harp, trumpet and flute. He is also a fine vocalist. He had the experience of interacting and performing with great American blues legends such as B.B. King and Otis Clay. He also performed at some of the largest festivals in the world, including the Montreux
Jazz Fest in Montreux, Switzerland, and the North Sea Jazz Fest in Den Hague, Netherlands.

Sanders will not be traveling alone; he will be joined by a fellow Mississippian and pianist, Jimmy Lee Jr. Lee is the selected state organist for the Northern Mississippi Jurisdiction of the Church of God in Christ. He has performed with top gospel performers of today, including Ricky Dillard, Kim Burrell and Dorinda Clark-Cole. He also has worked with Delfeayo Marsalis on his jazz remake of “Such Sweet Thunder.”

At the event, members of the Soft Spoken Band will perform as sidemen for the duo to round out the band. The amalgam of their musical styles is expected to burn the audio spectrum with moments of blues, gospel and jazz flavored with funky rhythm and blues.

Sanders sends an invitation for other local musicians to bring their axes. There will be a time later in the evening for an open jam session.

Have A Friendly Five suggestion? Contact Reggie Seigler at reggie@softspokenband.com or (315) 479-9620