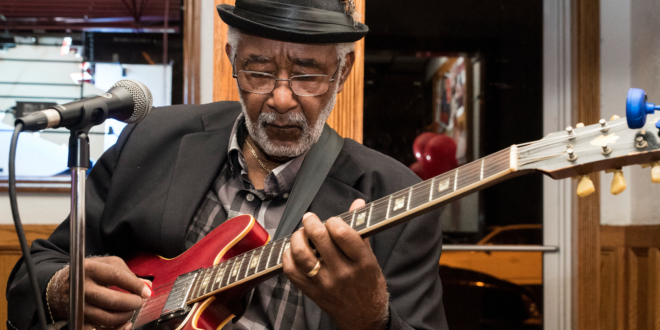 Bobby Green’s performance with A Cut Above at the B&B Cocktail Lounge was one of four over the same weekend, as he celebrated his 80th birthday. | Ben Cleeton, Staff Photo

At 80, legendary guitarist Bobby Green is still A Cut Above the rest

As I pulled up to the scene at about 7:15 p.m. Sunday, Oct. 16, the parking lot was nearly full and there was a stretch limousine in front of the B&B Cocktail Lounge. I knew then that the party was going to be nice.

By 8 p.m., the bar at 310 South Ave. was packed. Everyone had arrived to celebrate the 80th birthday of local guitar legend Bobby Green. 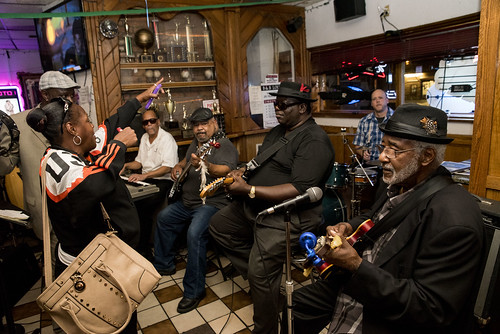 Bobby Green performs with members of A Cut Above. | Ben Cleeton, Staff Photo

Bobby has been playing the guitar par excellence around Central New York for better than 60 years. It’s a self-learned skill that began with a little early coaching amid some taunting from an older relative. The coaching ended when Bobby released the relative from his band.

“Then he began the taunting,” Bobby explained. “You will never be able to play the guitar without me,” Bobby recalled his uncle, Furman “Duke” Kearse, telling him. Duke, now deceased, was not only wrong but would never have imagined that Bobby, at 80 years old, would be filling a room with people waiting to hear him play.

“My uncle Duke would be real proud of me now,” Bobby said.

The partygoers danced and swayed and tapped their feet to the music. 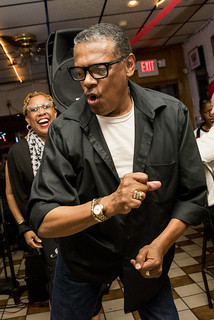 The crowd dances while Bobby Green and A Cut Above play. | Ben Cleeton, Staff Photo

Any unsuspecting “newbie” walking into the B&B Cocktail Lounge that night might have mistaken the bar for a nightclub in “gentrified Harlem” or some other establishment patronized largely by whites.

“We run a good business here,” said Bill Denham, one of B&B’s owners. “We’ve been in business for 27 years. If we didn’t, we would have been closed down many years ago.”

He went on to say that despite some bad press over the years, “what many don’t know is that everybody’s welcome here, and everybody comes here.” He believes people come to the B&B with a common purpose — to socialize, hear good music and have a good time.

On that night, good music was plentiful along with good vibes. Everybody socialized.

Bobby isn’t slowing down much and still keeps a grueling playing schedule. That same weekend in October, he performed Friday night at the Bridge Street Tavern in Solvay with the Trumptight315 band. Then, Saturday, he performed his long-standing annual birthday bash at Shiftys with his regular band called “A Cut Above.” The Shiftys gig at 1401 Burnet Ave. has been a tradition for about the past 15 years.

Playing a gig both Friday and Saturday night would have been enough for most musicians, but for Bobby that’s only half the weekend. Sunday morning, he played for the Antioch Church, and ended his weekend later that evening with his special birthday show at B&B. The Sunday night show featured both Trumptight315 and A Cut Above bands.

I called him the next morning to see if he would be worn out. He relayed that he was a little tired.

“But I had a good time,” he reassured me.

Bobby doesn’t want to waste time being tired. He said that he felt he still had some time to go and wanted to spend it playing his guitar. He mentioned a couple of other guitarists who had gone on to perform up on the big stage in the sky: Roosevelt Dean and Jeff Houston. 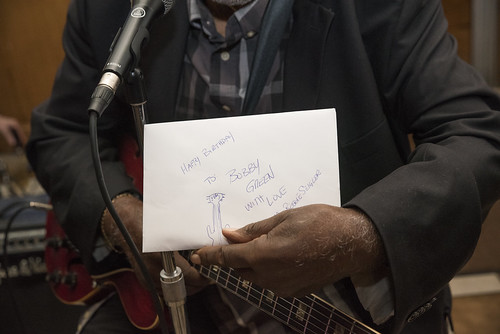 Bobby shared a few tidbits with me as to how he keeps going.

“I never smoke,” he started, “and I only drink on rare occasions.” He said that he didn’t hold grudges and that “vengeance belongs to God.” He feels that if you spend your time hating another person because of your differences, the other person wins.

And he believes that God will always bless you if you keep your faith. He gave the following example: “One time the doctors thought they’d found prostate cancer,” he said. After that news, Bobby went home and prayed on it; he returned to the doctor’s office for testing with a scope, and the test was clean.