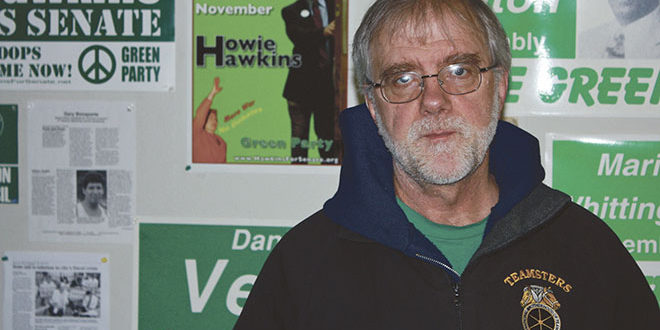 Howie Hawkins believes the planet could be beyond saving within the next 12 years. But there is hope, and he has a plan: cut carbon.

Hawkins is proud to claim the title, “first presidential candidate in the country to campaign on the Green New Deal,” which has been the Green Party’s signature program for over a decade. He believes we need to modernize the rails with an intercity electric train system. But it’s not just the train system, he says. “We need to completely reimagine travel in this country.”

No friend of Exxon or the Koch brothers, Hawkins believes we need to take the power away from Big Oil, and that our country needs a rapid transition in how we produce energy. The big question is, are people going to vote for change?

Hawkins, who has been on the ballot 20 times for everything from city council to governor, says this election he sees what he calls three life-or-death issues.

Q: You might question whether or not they are credible, but there are some people saying it’s all over. They say we have like 12 years, because we’ve destroyed the planet. Is it going?
A. It is. The 12 years number comes from a special report from the UN Intergovernmental Panel on Climate Change (IPCC). The report asks, can we limit the rise in global warming to 1.5 degrees Celsius? And they say that by 12 years we’d have to cut emissions by 45% — and that report is actually very optimistic, it’s not what the best scientists say.

Because the best scientists, like James Hansen from NASA, were saying back in ’07 and ’08 that we have to get below 350 parts per million of carbon in the atmosphere. We’re at 415 now. 350 will keep us to a rise of one degree, which is the range of the interglacial period that we’ve been in for the last 12,000 years — the period in which agriculture developed, and with that, civilization. Their scenario is that we have to zero out carbon emissions by 2030 and then restore habitat that are natural sinks for carbon: soil, wetlands, permafrost, forests. By 2100 we’d be below 350 parts per million and we’d just gotta cross our fingers and hope we don’t trigger things like arctic ice cap melting. Which means, instead of sun and heat getting reflected back into space by snow and ice, it’s getting absorbed in our dark ocean, which accelerates global warming. And when the tundra melts, you release methane and carbon, which will also radically accelerate warming. Then we start seeing environment that we haven’t seen in millions and millions of years. So the short answer is, yes, our planet is going.

Q. There have been some interesting experiences in this whole emergency. One example is Ms. Ocasio-Cortez. She seems to represent something fresh and energetic, I would say, in a very negative issue. What do you think?
A. Well, she represents young, progressive Democrats getting into Congress. They’re still a minority. She’s known for introducing the non-binding resolution for the Green New Deal, which has been the Green party signature program for over a decade; I was the first candidate to run on it.

They took our program and watered it down. They extended the deadline for zero carbon emissions from 2030 to 2050. What happens when you give a politician 32 years to do something? The kick it down the road and say, “I don’t need to worry about that, I probably won’t even be here.” That takes away the sense of urgency and it doesn’t respect the science. They removed our demand for an immediate ban on fracking nationwide and new fossil fuel infrastructure. Because if you build these pipelines, the investors expect to get returns on that for the next 40 years. That locks us into a climate holocaust. We need to rebuild the rails with an intercity electric system like every industrialized country, except this one, has. That way there’s less dependence on personal vehicles, and air travel, which will help reduce carbon emissions.

Q. Will people do it?
A. I think people will do it, the problem is vested interests. Is Exxon, or the Koch brothers, going to reinvest their earnings from fossil fuels into renewables? Not in a million years! We’re gonna have to nationalize Big Oil, we’re gonna have to have public power so we can plan out the transition, a rapid transition. We have to do what we did in World War II: we turned American manufacturing on a dime into the arsenal of democracy that defeated the Nazis. And the federal government either took over or built over a quarter of the manufacturing in those four years. We need to do at least that much to defeat climate change. So that’s why I’m calling for an eco-socialist Green New Deal.

Q. And what about government? Are there things government can and should supply?
A. Well, part of our green deal is an economic Bill of Rights. People have their economic situations secured so that they’re willing to make these radical changes in our energy systems, in our production systems. You saw last election that there was a ban on fracking in Colorado defeated, a carbon tax in Washington defeated, the Yellow vests rebelling to a gas tax saying, “why you gotta make us working folk pay for it when you gave tax cuts to the rich?” So people got to be engaged to get government doing the right thing. And you know positive government action is what it’s going to take–public policy. It’s not going to be consumers in the market making new choices and buying the right stuff, because you can’t even buy the right stuff.

Q. What is the worst thing that people can do?
A. Think that neither party cares about them so they aren’t going to care about those parties. They’re gonna stay home, not vote, not get engaged. Say, “I’m not gonna play their game,” but that is their game. They want you to be complacent, they want you to feel powerless. Like I keep saying, people have to get engaged.

I think Republicans represent the reactionary racist right. They’re a minority, and they only win because Democrats cower before them. Pelosi says we can’t impeach because it would divide the country. Then Trump opens his mouth and divides the country with his racist tropes, and incites these white nationalists to violence.

Q. You think you could win one?
A. Oh, absolutely. I got 48% running for city council, it was in the cards, it was close. And we need to start winning races like this because most of our races are in states that are non-partisan local races, so the ballots aren’t labeled with parties, they vote for the individual. When you have party labels, people just use the parties as shorthand. A lot of people say, “I’m a Democrat, so I’m just gonna vote for all the Democrats.”

Q. You’ve got an office where the ballot only has one candidate and it’s a Green. What does that mean for the local scene?
A. Well, that would mean there’s a Green in office. Hopefully, their performance would establish our legitimacy and change the psychology around the Green Party a bit. Oftentimes a lot of people say, “I wanna vote for the Green, but I’m afraid he might be a Republican, so I’m going to vote for the Democrat instead.” That psychology will change once we get people in office.

Q. How will you use this campaign?
A. Two purposes. One is to promote the eco-socialist Green New Deal. And there are really three life-or-death issues. First is the climate change crisis. We’re into a new nuclear arms race, that’s the second thing. The third is working-class living standards.

If you go by this recent American Medical Association study, in the poorer countries people’s life expectancy is 20 years lower than the affluent countries. So paying the rent, utilities, medical bills, groceries ­— people can’t pay their bills and sometimes compensate with alcoholism or drugs. We have an overdose epidemic, and so forth. So working-class living standards is an issue that neither party is addressing in a serious way. That’s why we need a Green Party, because these issues aren’t being addressed.

— By Walt Shepperd, Special to The Stand