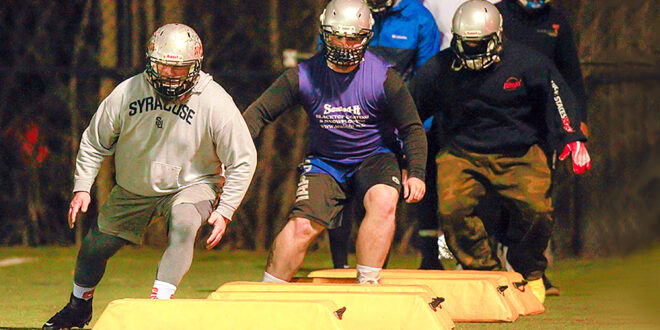 Players of the Syracuse Strong during a practice at Sunnycrest Field. | Jim McGregor, Staff Photographer

Syracuse Strong to return in a new league

Three years ago, the Syracuse Strong were at the top of the Northeastern Football Alliance (NFA) with consecutive undefeated seasons and a league title to its name. Their dominance as a volunteer semi-pro football team in the Central New York area was unquestioned. They played hard, fast and physical football in a semi-pro league for their passionate fanbase. The Strong’s 29-1 record during their last two seasons in the NFA brought together the local community and parlayed the inevitable departure from the Alliance in 2020.

The transition from the NFA opened a more challenging and unknown chapter for the team as they moved to the Gridiron Development Football League (GDFL). The league features 35 semi-pro teams from across the country that are separated by regional divisions. The GDFL presented a blossoming future for the Strong, who were ready to bloom during their inaugural 2020 season.

Yet, the season never came to be when the novel coronavirus hit the country like a heat-seeking missile in March of 2020. New York state was on lockdown almost instantly meaning the Strong weren’t even eligible to practice as a team. By July, the GDFL folded altogether leaving the Strong out of commission for a full year. The team was finally given re-assurance early this year that their GDFL season could truly resume in 2021. In the eyes of Head Coach Ed Watkins, it was a long time coming.

For Watkins, it seemed like yesterday when the pandemic hit. Like many at the time, he was somewhat bursting with optimism that the virus would pass through the area without any feasible harm, and his team could resume GDFL play. When it truly dawned on him it wouldn’t occur that way, Watkins faced the cold reality that 2020 would be the Syracuse Storm’s lost season.

“New York state was a lot different than many other states,” Watkins said. “Mind you we were the only two teams from the GDFL, us and the Rochester Predators, in the New York area. We were locked, and we couldn’t do anything. We already knew it wasn’t going to happen for us earlier on than most teams did.”

It was the time off that Watkins admitted he didn’t know what to do with. He spoke about resenting the fact that other New York city football teams got to play while he didn’t but acknowledge that the moves made by the Strong and GDFL were meant for the safety of all involved.

This season, Watkins vows that the Strong will follow blueprints from various area high school football teams on what COVID-19-friendly preparations will be used for the Strong during team practice. In his eyes, the most ideal prep techniques featured during the pandemic could arguably make or break the team’s re-emergence this spring.

“I’ve got a couple of coaches on my staff that are high school coaches and we’re going to get the feedback from them on what they’re doing because we still have to do protocol,” Watkins said. “If we can’t do what we’re supposed to, then we’re not going to play.”

The Syracuse Strong are predicated on building the best roster possible to achieve championship success. Watkins noted his team’s recruiting process is the reason the Strong have adapted a winning culture. While other teams go out and recruit players with promises of playing time and jersey numbers, Watkins says he always tells possible clientele that he’ll play the best 11 on the field. From there, he relies on a familiar collective to fill out the roster for him before the season.

“The players themselves really do a lot of the recruiting,” Watkins said.  “They say: ‘Hey, do you want to be a part of a winner? Come pay with us. Don’t play with that team.’”

The team itself will go through growing pains on the defensive side as they bring in a band of newcomers. Yet, offensively, Watkins feels the Strong will be humming as usual when they return all their key cogs from two years ago. While the offensive line will be slightly reshuffled, the Strong relish having its top three receivers and starting running back returning to the squad. The leader of that group rests on the shoulders of quarterback Jason Boltus, who Watkins values as the linchpin of the offense.

“Having him is crucial,” Watkins said. “He’s got a nice (professional) resume. So to have him, makes it a lot easier for our receivers.”

For the Strong to return to the scene after a two-year hiatus means a lot to its fans. The Strong Faithful haven’t been able to see the team play since December 2019, and to Watkins, the support has been dearly missed.

“The community means everything to us,” Watkins said. “That’s why we try to go out there and try our best to put on a show. Because on a Saturday evening, that’s how we try to sell us.”

Watkins acknowledged the Strong were a source of light within the city as the area’s most successful football team. In his eyes, the team helped compensate for the lean years of Syracuse University football fandom. While he admits that the Strong won’t get the crowds of onlookers like the Orange Football team, he says it’s impactful for the team to have its fanbase desiring to check out local football talent.

“We’ve gotten great feedback from the community and the mayor himself,” Watkins said. “That’s been great. The support, we definitely appreciate that. We just want to put on a show.”