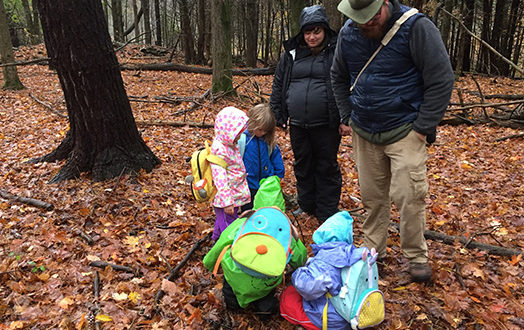 Casey Johnson ventures out into the woods with her young students and co-teacher Zach Ashbrook last fall.

Asoft rain fell over Manlius one October morning. Under the cover of cedar trees, Casey Johnson sat around the Sacred Circle shielded from the precipitation and wind. Preschool students sat on flat rocks on the forest floor, tearing through their afternoon snacks in what other schools might call “circle time.” At Creatures in the Wild, the Sacred Circle is a place for Johnson, the preschool’s founder, to talk with students and help them connect to the environment.

In November 2016, Johnson acted on impulse when she decided to start her own forest school. When Donald Trump won the presidential election, Johnson could not sit still knowing her 6-year-old son, Ivan, would go through the public education system under the leadership of Trump. Ivan is on the autism spectrum and gifted, Johnson said. He needs to learn constantly and through sensory experiences. Ivan had become obsessed with studying the election, and felt disappointed with its results.

The very next day after the election, Johnson vowed to bring to her community exactly what her son, and countless other students, needed, she said. Trump won the election partially because he and his supporters don’t care about the Earth, and don’t care about one another, Johnson said. She wanted to create a school that celebrated nature, and worked outside the realm of what she feels are wealthy, out-of-touch bureaucrats.

When the president announced his pick for U.S. Secretary of Education, it further inspired Johnson.

“Betsy (DeVos) pulled in with her completely unexperienced, terrifying opinions,” said Johnson, referring to her own view of how DeVos treats the education system like a business.

In the time since the election, Johnson has made her vision a reality. She now operates Creatures in the Wild, a completely outdoor preschool that meets three times a week in the woods of the Central New York Land Trust’s Woodchuck Hill Field and Forest Preserve in Manlius. Rain or shine or 20 degrees out, Johnson and her team take a class of about nine students into the forest for free play and nature-based learning. The school has met outdoors through this winter season, the only exception being days the public-school district canceled, and two days so cold that the preschool decided to meet indoors at a public library.

With Creatures in the Wild drawing interest from parents in the community, Johnson has the long-term goal of opening a private K-12 forest school within the city of Syracuse. Johnson said she envisions the school as affordable and accessible, and said she hopes to implement a sliding tuition scale so lower-income students pay less. It would be located in a natural space within the city of Syracuse, and include at least 25 percent inner-city students.

Back in October, Johnson described these plans with an excited intensity. Her breath struggled to keep up with her words that flowed naturally with bold passion. She talked fast, and worked fast. In less than a year, Johnson’s beliefs, transformed by anger and frustration with politics, grew into a fully functioning preschool. And by the way — Johnson, already a mother of two, worked at her family’s dog-grooming business and was “bonkers pregnant” at the time, she said. Johnson has since given birth to a son, and is on maternity leave. 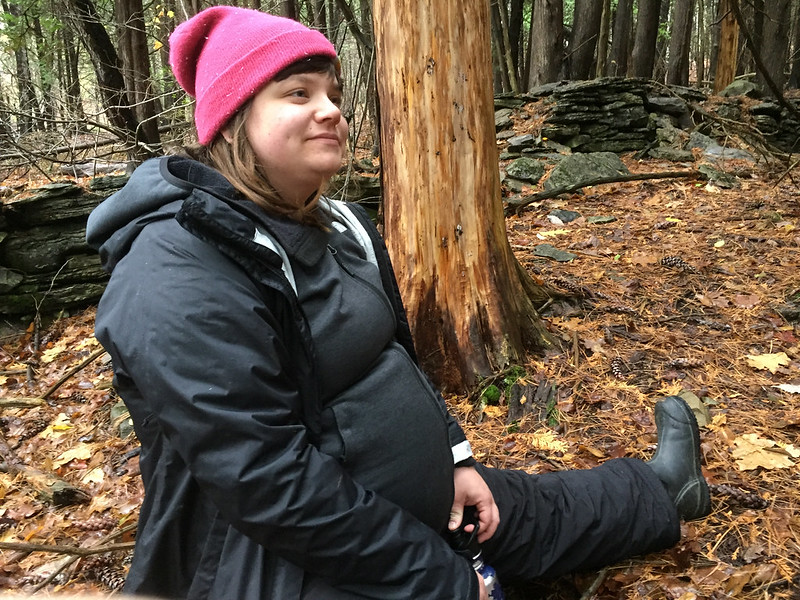 Casey Johnson is the creator of Creatures in the Wild, a completely outdoor preschool that meets three times a week in the woods. Her dream is to one day open a forest school for city school students.

Johnson’s philosophy of education strays from the typical trajectory of public school learning. The adolescent brain develops from doing things, Johnson said. Rather than listening to long lessons and completing paperwork, K-12 forest school students will focus on play-based and project-based learning, she said, and multiple school subjects will be intertwined in each task.

Unlike traditional schools, the school Johnson is proposing won’t have grade levels. Teachers will group together students within roughly three years of age of one another. Since groupmates will be at different points in their educational development, a system of mentorship will naturally form, Johnson said.

In the thick of the woods, Creatures in the Wild students learn the same skills as students in traditional classrooms, and maybe even more, Johnson and her co-teacher, Zach Ashbrook, suggested. Ashbrook studied outdoor recreation at State University of New York at Cortland, where he concentrated in environmental and cultural interpretation.

“We’re encouraging kids to be as creative as possible, and I think that Casey brings the creativity to the kids,” Ashbrook said. “She’s really good at coming up with ideas that kids just kind of latch on to.”

When they play, the preschoolers are expected to help one another and clean up after themselves to learn responsibility and basic citizenship. When the students fight, Johnson and Ashbrook instruct them to express their feelings directly with words so they learn communication skills and conflict resolution. In the woods, students also gain what Johnson calls “risk assessment” skills. Instead of testing their limits on plastic slides, students at Creatures in the Wild climb over walls of stone, jump over large puddles, remove thorn branches and balance across fallen trees to learn motor skills and balance. Johnson never offers a hand to hold when the kids try new things; they are encouraged to act entirely independently to develop self-awareness and self-confidence.

Johnson herself knows a thing or two about jumping into something she has never done before. Since 2016, she went from working for a restaurant to founding and running her own school. Through social media, she has developed a committee of more than 100 people in helping with the cause. Emily Pollokoff, a homeschooling mom, found Johnson online and started working alongside her at Creatures in the Wild. Now Pollokoff has taken over class instruction while Johnson is home with her baby.

“Casey is a force of nature, really,” Pollokoff said. “I met Casey not even a year ago and within that time there’s been preschool, summer camp, after school, and home-school stuff. She’s reached so many kids and developed so many programs. I don’t know anyone who could do this, even when they’re not pregnant.”
Parents can also attest that Johnson’s passion is evident in her work, and that students are benefiting from Johnson’s methods.
Julie Poplaski says her 4-year-old, Ambrose, responds well to Johnson’s hands-off style of teaching. In fact, she said, there has never been a day that Ambrose woke up not wanting to go to school. Her son is especially excited by what he and his friends are constructing in the woods.

“Ambrose talks about that fort. He’s so enthusiastic, it lights him up,” Poplaski said. “Kids need more of that sort of stuff for their brains and development. More so than memorizing ABCs and 123s — there will be time for that. Right now, I want him to just explore and use his imagination.” 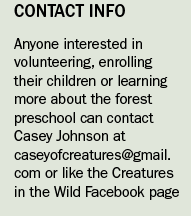 Johnson has her sights set on expanding the Creatures in the Wild preschool and founding the K-12 private school down the road. The biggest obstacle will be funding, Johnson said, but she is already applying for grants as well as brainstorming curriculum, classroom space and a vetting process to find teachers.

At the end of the day, Johnson’s goal is to educate children in a way that connects them to their community and to the land. When asked about President Trump’s stance on climate change, Johnson said it’s obvious how people are disrespecting the land and that it is causing environmental harm. A large aspect of forest schools is showing the next generation its responsibility to the earth by immersing young kids in nature. In spring, Creatures in the Wild will begin construction on an outdoor adventure playground where students will be able to garden, build and play in the mud.

As a forest schoolteacher, Johnson also embraces the natural world. Even while pregnant, Johnson ventured into the woods in the wind and rain and sat on the ground with the kids during their Sacred Circle time.
Johnson was unfazed.

“There’s no such thing as bad weather,” she said. “Just bad clothing.”

— Article and photos by Lindsey Sabado, The Stand Staff reporter