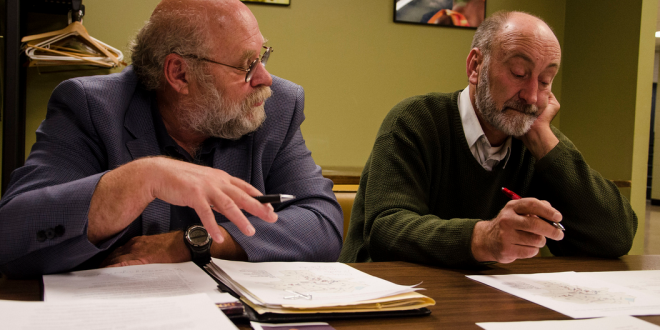 A South Side organization has decided on strong marching orders toward its ambitious goal of establishing systemic change to combat youth violence in Syracuse neighborhoods. 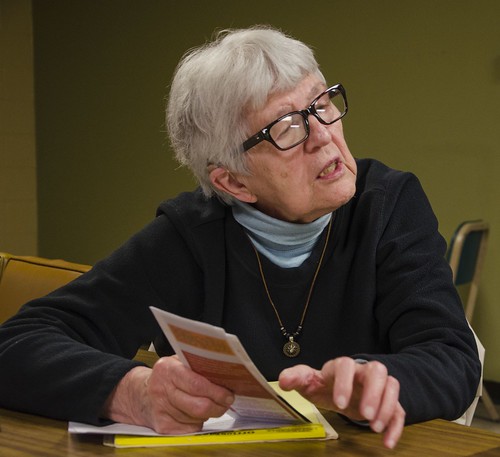 Lisa Mundy gives her input on the meaning of “Conflict Transformation” at the Oct. 8 ACTS Community Violence Task Force meeting.

Members of the organization — the ACTS Community Violence Task Force — say they want to move beyond merely resolving conflicts and instead focus on transforming the South Side neighborhood, which is being harmed by gang and gun violence.

“We’ve been aware that the term ‘conflict resolution’ is kind of limiting for the kind of work we want to be doing,” said Barry Lentz, a member of ACTS, which  stands for the Alliance of Communities Transforming Syracuse. ACTS oversees the task force.

“Conflict transformation,” he said, goes beyond mediating incidents to working on establishing a community of people who understand what events and situations aid in developing violent environments.

The organization’s most recent meeting, held Oct. 8 in the Southwest Community Center at 401 South Ave., elicited an emotional response to local violence when one man wept over a map of Syracuse highlighting violent incidents that have afflicted the South Side.

Emmanuel Flowers, an ACTS co-chair and leader of the meeting, wiped his eyes when he looked down at the map. He put his hand over his mouth and sighed as he cupped his chin.

“It’s hard for me to look at this map, because some of those faces — they’re just dots on this map now,” Flowers said. His emotion swept the conference room, and other members’ posture and body language changed with his.

Back in September, the task force voted to pursue a project that would tackle conflict resolution. Members eliminated other ideas, such as police relations and youth services, opting instead for training that would give community members the tools they need for understanding and working to prevent violence.

Lentz explained that conflict resolution is specific to a certain scenario in which a win-win result has to be found, and conflict transformation goes beyond that situation to address the community architecture that makes conflict happen. 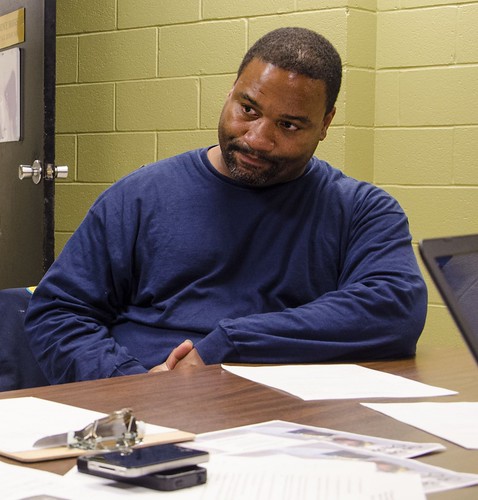 Emmanuel Flowers, an ACTS co-chair, tears up after looking at a crime map of data released by the Syracuse Police Department.

“With conflict resolution and conflict transformation, you can see that being worked out,” Lentz said. “What can we do within the structure of the community so those conflicts don’t keep occurring?”

The meeting’s discussion spanned a variety of topics, and a primary concern emerged: economic decline on the South Side.

“Concentrated poverty — it’s been the problem in Syracuse for decades,” Lentz said.

“Concentrated poverty contributes to those problems related to the system,” Cass said.

Lisa Mundy, a community member and ACTS participant, suggested ways to coordinate the task force with other existing community organizations.

“Maybe as a group, we’d want to arrange for a workshop, because then we could move out into the community having experienced what conflict transformation is,” Mundy said.

Mundy’s point seemed to resonate with other ACTS members — a training session of some sort was added to the list and deemed vital to the project.

A graphic produced by the Syracuse Police Department was distributed at the meeting, and it showed details where shootings resulted in injury and in death. Small dots scattered around Syracuse were dense in the parts labeled as Syracuse’s South Side.

The sadness was heavy for a moment before Cass asked the group to look at the map and decide whether to tackle all of Syracuse or start with a specific spot.

“The severe affliction of violence on the South Side of Syracuse has expanded to what is considered the southwest,” Flowers said as his eyes welled with tears. “So I guess if you want to fix something, you start at its heart, and I’m drawn to believe we’re sitting very close to it.”

Cass agreed, saying starting small is a good choice, and Lentz followed up by agreeing that the South Side is close to everyone in the room, and obviously a place that needs help.

“It would be nice to have an anchor from which to build out from,” Lentz said.

After a gripping 90 minutes, the task force had made major decisions. At its next meeting this month, members will talk more about workshops to train people in conflict transformation, developments in community partnerships and the decision on a home base, which most likely would be the Southwest Community Center, Flowers said.

As Flowers concluded the meeting, Lentz had some closing words that lifted the dark mood.

“I would argue it’s not as tough as we think it is,” he said. “We just have to be willing to do it.”