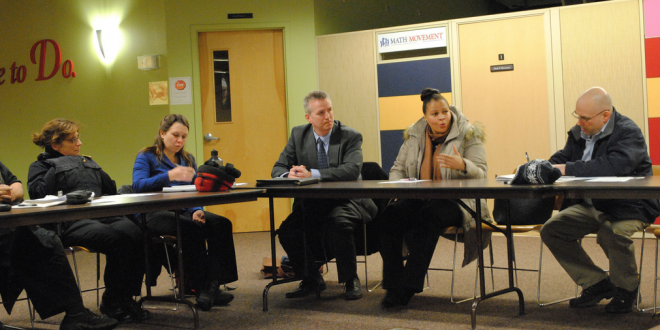 Addressing Use for Vacant Lot

Syracuse city officials are hoping to find a new use for a vacant lot, a high-visibility space that abuts South Salina Street at the intersection that serves as the South Side’s northern gateway.

Paul Driscoll, who heads the city’s office of neighborhood and business development, said the city was willing to “entertain any proposal” from South Side residents as to how to improve the lot, which sits on the east side of South Salina’s intersection with Martin Luther King Way.

Although the parcel is zoned for commercial development, the city is adjusting its zoning codes and could allow other uses, he said.

He said he wanted to spend most of his time at the meeting listening to residents’ ideas and concerns.

Mike Atkins, a South Side resident, suggested that the lot be used — at least temporarily — as a community farmers market. Atkins said he envisioned fresh produce and other homemade items for residents. At the same time, he said, use of the parcel as a market would stabilize the lot until a developer could look at it and possibly turn it into something else.

Driscoll responded by praising the idea, which he said would be in keeping with the city’s goal of maintaining South Salina Street as a commercial corridor.

Some at the meeting voiced their concern that people from outside the neighborhood loiter in the lot at night, and they suggested the city might better work to dissuade that practice. 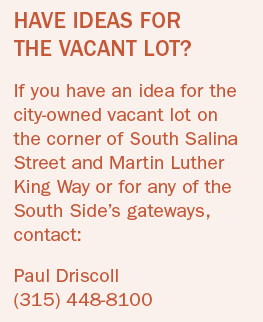 Walter Biland, another resident at the meeting, said that when something is being built in a neighborhood, residents often are curious. If business owners attended meetings, he said, they could answer residents’ questions.

Among other matters raised at the meeting, Sexton said that the South Side TNT had obtained  $5,000 — money that can be used for a “special project” in the neighborhood.

Sexton said the money has to be spent by June 30, and it must benefit public property, so the sum can neither be spent to develop a service nor go to benefit a private individual or a business. Sexton said his goal is to have residents decide what to do with the money by the TNT’s meeting in March. Anyone can fill out a form discussing ideas for the project, he said.