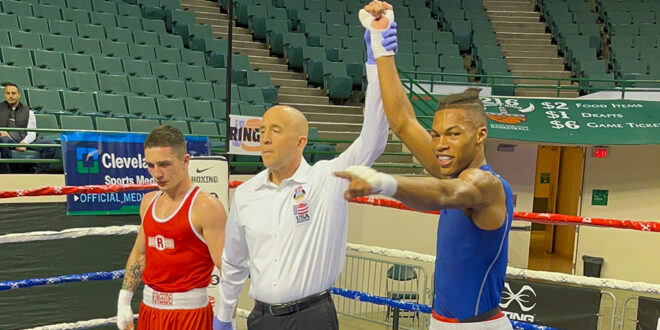 There’s plenty to think about and even more to overthink.

The walk from his home near Western Lights to the boxing gym is just over a mile. Amir “Cash” Anderson makes the walk six days a week. He sees all sorts of things.

He passes rundown faces on his way to Ray Rinaldi’s West Area Athletic and Education Center on South Geddes Street, where the sound of leather hitting a punching bag is heard behind a coach’s directions.

“I see everything I don’t want to be,” said Anderson, sitting on a bench still wet with sweat after training.

“I hate walking,” added his friend Imari Williams sitting next to him. “You could be innocent and still get shot. Wrong place, wrong time. A bullet don’t got no name on it.”

The two boys, both city high schoolers, are safe within the walls of the boxing gym. The building used to be a McDonald’s restaurant. The dark red tile flooring is still the same where the kitchen once sat.

The boxing gym’s coach, Chris Burns, who teaches and tutors math with the Syracuse City School District, converted part of the old dining area into a classroom. A whiteboard scribbled with equations stands at the front of the room in front of computers where kids finish their homework after sparring sessions.

This is safe. This is where Anderson, who started training with Burns at age 7 to defend himself at school, molded into a national champion. The boy who cried at his Thornden Park Bulldogs football practices won the 2021 USA Boxing Youth Championship last December at 156 pounds. With that win, Anderson, a senior at PSLA at Fowler High School, earned a spot on the USA Youth Training team. He one-upped that at the end of April.

On April 30, he fought in Cleveland, Ohio, and won the 2022 USA Boxing National Qualifier at 156 pounds in the tournament’s Elite division. Anderson, who started the tournament as the No. 1 overall seed, achieved his goal of making the Team USA training squad in the Elite, Junior and Youth divisions.

The mile stretch between home and the gym is all Anderson, 18, needs to know right now. But already, boxing has taken him around the United States from Dallas, Texas, to Colorado Springs, Colorado.

Boxing, what Anderson calls his meditation, taught him how to fight for himself and his goals.

Anderson’s friend Williams, the only other fighter in the gym who can switch between south paw and orthodox stances, is now standing, showing off a picture on his iPhone.

It’s of the two of them posing with other young fighters from the gym after a tournament in 2017. Anderson stands in the back, taller than the others, the only kid without a belt to hold.

“We all won a belt, he was the only one crying,” Williams said about the picture. “I’m proud of him. I feel like we accomplished something. It’s only up from here, and I can’t wait to be right there with him.”

Anderson didn’t have the same immediate success some of the others in the gym had. Burns said he was average, just like many of the other kids when he started. For Burns, “Cash’s” nickname used to be “waterworks” because of how often Anderson cried at the gym.

Winning was a process for Anderson. He built on little victories, like lasting until a later round or reaching the podium at tournaments. But he said he never worried about the losses. Yes, it hurt to lose, especially at a young age, but he used that emotion as motivation.

“I was just having this conversation with him last week,” Burns said. “The reason why he’s really on a good path for success is because he didn’t have the easy way. He didn’t win every single one of his fights early. He was able to get those failures that you need in order to see if you actually have perseverance.”

And Anderson does. His next goal is to reach Paris, France, to represent the United States in the 2024 Summer Olympics. He isn’t thinking about that in the ring but has plenty to think about on his walk home.

It’s there, on that walk, where Anderson starts thinking again. He thinks about how he can make a difference.

“Like poverty. I would like to buy houses and rent them out for cheaper prices so families can get more food and nice stuff,” Anderson said. “(I see) things that I don’t want to be and things that I want to change.”

Within the West Area Athletic and Education Center boxing gym, yellowed newspaper clippings stick to the walls and a bell signals the start of the next sparring round. Williams is still to his left, Burns circles in front of them with the brightly lit ring sitting behind him.

Dean Zulkofske is a journalism student at the Newhouse School