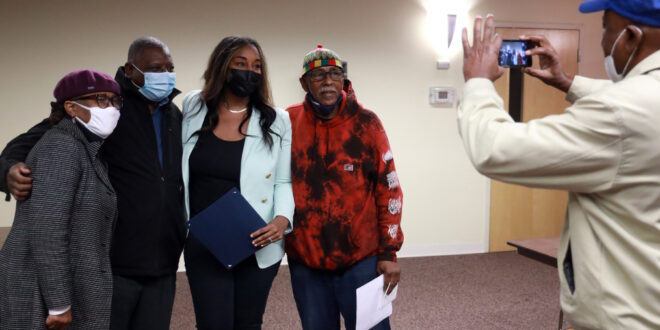 Natasha Alford will next speak Oct. 20 in public appearance

Journalist and Syracuse native Natasha Alford returned to her hometown to hold a series of workshops, town halls and student visits this week.

On Monday, Alford led a workshop for partners to The Stand on pitching op-ed pieces and knowing your rights when being interviewed. Alford, a Nottingham High School alum, is the vice president of digital content at TheGrio, a news website dedicated to producing African-American focused content. She also contributes to CNN as a political analyst.

At the beginning of the workshop, Alford discussed the complicated relationship between local communities and the media.

“There can be a deep mistrust of the media, which is warranted for so many people,” she said. “But the media can also be an incredible tool.”

Alford says the media changed her life at age 14 when she was first profiled in The Post-Standard by then columnist Sean Kirst. An article about her becoming a state champion in New York’s American Legion High School Oratorical competition – for which she took the title twice during her high school career – led to a series of pieces on her journey through Nottingham leading up to her applications to college.

Alford said it felt powerful that the press had an interest in her — an inner-city student from the South Side. This set her on a path to become the people’s journalist.

Next in her presentation, Alford turned her attention to the attendees, noting the powerful pieces of journalism she read that many in the audience had created themselves.

She was especially struck by The Stand’s music columnist Reggie Seigler’s piece on Remembering Street Musician Eli Harris. She says the piece took a closer look at this musician’s life. Many in the community knew of Eli, but few knew about him. She says Seigler’s writing gave an inside look.

Another feature that stood out was The Stand’s new series on Minorities in the Skilled Trades launched by The Stand’s Director Ashley Kang. Alford said the Q&A format allowed a formerly incarcerated individual who completed a local training program and was next hired, making $50 an hour, to speak freely about the challenges and barriers he’s faced. “There’s many politicians and leaders that need to read his quotes,” she said, noting how too often the individuals being impacted by policy are often not mentioned in stories on big issues.

Next, Alford questioned the audience on what happens when the community doesn’t trust the media. Some attendees felt that the media often failed to tell full stories, glossing over context or editing out important background. Others noted that they had a difficult time getting specific details about government initiatives through the news.

“Many stories are actually captured from citizen journalists who get the truth, who have the relationships, and then it’s amplified by other outlets,” Alford said, encouraging attendees to think of what they themselves are experts in and consider writing on that subject.

She then asked what it looked like when there is trust with the media. One common theme mentioned was the many grassroots groups that utilize the media to share compelling stories, gain traction on issues and greater attention for their cause.

“Journalism is a democratic process. It’s part of protecting our First Amendment right,” Alford said. “But if people feel overlooked or they don’t have trust, then they’re not going to be willing to participate.”

Alford encouraged current and prospective reporters to build relationships with people in the community — not to only seek them out when they’re needed to help with an article.

“For us as storytellers, we should be investing and planting seeds into peoples’ lives and into different communities so they feel open enough to come to us with their stories,” Alford said.

Alford stressed the importance of people knowing their rights in dealing with the media. She talked about understanding the story a reporter is telling, having a comfortable interview environment and knowing that statements given to reporters are final, even if those opinions change.

“Now, if a source has a change of heart or their opinions on an issue change,” she noted, “then a follow up story could be pursed to share why that happened.”

Finally, Alford asked the audience to partake in an op-ed pitch exercise, explaining an op-ed is short for “opposite the editorial page” and is a piece of prose written that typically expresses an opinion not taken by a publication’s editorial board.

In a final exercise, attendees were asked to come up with a subject they believed they had expertise in, connect it to a current news topic and propose a media outlet to pitch.

“I think that it’s important for people to have structure for the way that they explain things,” said attendee Mike Atkins of Helping Hands Urban Farm Garden. “Now they can exercise that voice a little bit better in order to get it printed in formal media.”

Alford was honored at the end of the workshop with a proclamation from Mayor Ben Walsh declaring the week of Oct. 18 through 22, as Natasha Alford Empowerment through Journalism Week in the city of Syracuse.

Ruthnie Angrand, director of communications and marketing for the city of Syracuse, presented the proclamation in the mayor’s place.

“Natasha’s roots continue to water Syracuse’s future storytellers through her time and energy offering workshops, a town hall talk for the community, city high school visits and engaging city students at the Newhouse School …” the proclamation read in part.

On Wednesday, Oct. 20, Alford will hold a public town hall event, “Empowering the Community through Journalism,” at 6 p.m. at the Greater Evangelical Church, 4325 South Salina St. The session is free and open to the public.