Back on the Ice

After nearly four months of repairs, Meachem Ice Rink is back in business.

According to Syracuse’s Parks, Recreation and Youth Programs Department, the repairs at 121 W. Seneca Turnpike had been a long time coming.

“We’d known for a while that the rink was on its last legs,” said Common Councilor Bob Dougherty. For the past three years, Dougherty, who chairs the council’s parks and recreation committee, said the city’s financial situation had allowed for only temporary repairs to the rink. Mayor Stephanie Miner joined forces with State Sen. David Valesky and State Assemblyman Bill Magnarelli earlier this year to secure more than $400,000 for the project, Dougherty said. 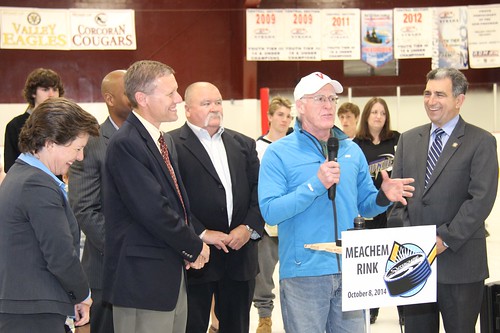 Meachem closed indefinitely in April and officially reopened Oct. 8. Work started in June to install an “ice mat” ice surface, which Dougherty said should last at least 10 years. The ice mat contains coolant tubes and was laid over the concrete floor. It was a less expensive alternative than the projected $1.5 million needed to replace the rink’s 30-year-old coolant system.

“We were lucky in that the boards around the ice were only a couple of years old and in good shape,” Dougherty said. Maintenance workers at the rink said that the repairs mainly consisted of re-wiring the electricity to accommodate the upgrade as well as installing new ramps to lead up to the elevated ice surface.

Dougherty and hockey coaches of teams that play at the rink all said that the timing of the repairs was good. Most of the teams’ regular season play ended right before the April closing.

For the Syracuse Cougars of Corcoran High School, Coach John Purcell said he is thankful the project pulled through and did not affect his team’s season. They are due to officially start their season Nov. 10.

“Everybody’s really excited about it,” Purcell said. “Corcoran hockey has been around for over 30 years. People would have been really disappointed.”

At the time the closing was announced, however, one league’s coach said that the news was not well-received by the public.

“There was a bit of a panic until we got the money,” said Pat Easton, coach of the Valley Youth Hockey PeeWee Blue team. “The ice had melted everywhere.”

Dougherty attested to the people’s reaction. “There was a lot of uproar about it,” he said. “There are only so many sheets around where people can skate,” Dougherty said, referring to ice rinks. “Clamor for ice time is really something.”

In the time that Meachem Ice Rink was closed, teams and recreational skaters were forced to travel elsewhere for ice time. They were directed to nearby rinks, such as Sunnycrest Ice Rink and Clinton Square Ice Rink.

Now that Meachem is open again, the ice is already being used and geared up for upcoming hockey seasons.

“Sometimes it’s taken for granted,” Dougherty said. “We’re lucky to have it.”