City officials, including Common Councilor Khalid Bey, want to see Syracuse develop a business corridor on South Salina Street. Bey, who represents the council’s 4th District, said he believes that the growth of small businesses along the street would boost Syracuse’s tax base, as South Side residents spend their dollars locally. Armed with a $1 million state grant to improve such business districts, city workers already have begun improvements to the street to make it more attractive. 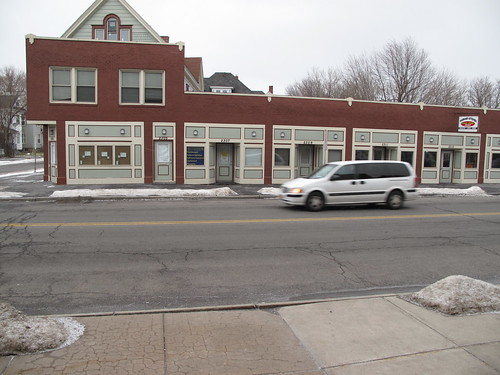 Work will be focused on storefronts like this one, in the 2300 block of South Salina Street. | Ashley Kang, Staff Photo

“We are happy to say that we have finally been able to successfully assist in pushing this project along, which has been on the city’s docket for the past several years,” said Joseph Bryant, Southside Community Coalition president.

“The money, which was sitting in limbo since 2009, was slated for an area like South Salina Street that had received zero attention in over 30 years, the type of attention people have been calling for,” Bey said. “Fortunately, we had a representative in the state Senate who thought it would be smart to make the investment.”

The city has spent half the grant on street and sod improvements, specifically the re-landscaping of the 2020 and 2500 blocks of South Salina Street. Officials have allocated the remaining money for street improvements next to South Presbyterian Church, for a pocket park behind Beauchamp Branch Library, and for the business corridor in the Salina Street trade area.

The business corridor that Bey envisions would be bounded on the north by Taylor Street, on the south by Brighton Avenue, on the east by I-81, and on the west by Midland Avenue.

Bey believes the corridor could be profitable. In a 2005 study done by Syracuse University’s Maxwell School of Citizenship and Public Affairs, city officials discovered that the people who lived in that area had a greater concentrated buying power in retail, on average, than other Syracuse and Onondaga County citizens. 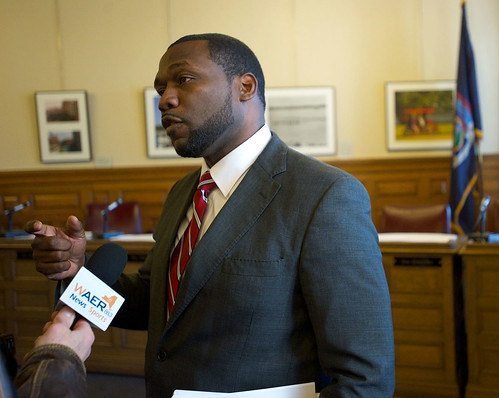 Common Councilor Khalid Bey said South Salina Street could be “one of the most viable corridors in the entire city.” | Ethan Backer, Staff Photo

While there is potential for South Siders to spend their dollars locally, Bey believes residents currently spend their money outside of the area because the retail they are looking for does not exist on the South Salina Street corridor.

When Bey and city officials looked at other areas with strong business corridors, such as James Street and Westcott Street, they noticed that in addition to a history of business survival, these areas also experienced a strong level of participation and support from the community.

Private investors and members of the community had put money toward these areas and opened small businesses there. These people were rewarded with tax breaks, and Bey hopes for the same on South Salina Street.

However, some residents have voiced concern that occasional violence in the neighborhood would harm the area’s business prospects.

“Every week it seems like there is a killing, or a shooting, or a stabbing and our community lives that the rest of their lives,” said Geneva Hayden, a South Side resident. “There are a lot of unnecessary things going on in our community right now, and it’s hard to get behind these big projects when the streets aren’t even safe for our children.”

But Bey says the neighborhood cannot be rebuilt without first rebuilding the neighborhood’s business district. This, he said, starts with turning South Salina Street into an attractive corridor.

Before work began, many lots along South Salina Street seemed either barren or littered.

“Looked like a big eyesore,” Bey said of the lot next to South Presbyterian Church at 112 W. Colvin St. “It is just not attractive to have a lot sitting there with cars parked on the grass,” he said. “It’s also not something you want potential patrons to see when they are coming to your area to spend money.” 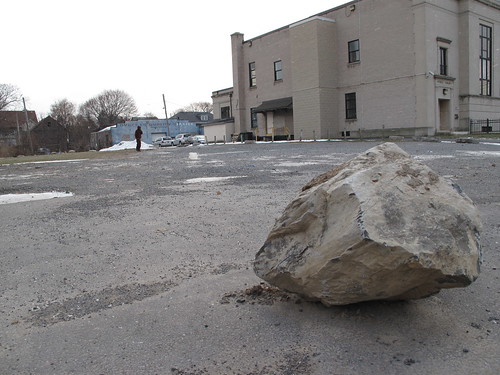 The site of the proposed pocket park located behind Beauchamp Branch Library has recently added rocks to prevent people from parking cars on the lot. | Ashley Kang, Staff Photo

Grant money already has been spent to landscape the lot next to the church as well as to pave the lot across from Blue Brothers Barber Shop at 2036 S. Salina St.

While city officials are determined to continue to improve the aesthetics of the business corridor, they noted that people have a misconception that government does development, which is not true.

While the state money from Valesky was always there to improve the area, there was no movement on South Salina Street until community members started making investments, Bey said.

Now that the project is underway, and people are seeing Bey’s vision come to fruition, there has been a palpable sense of pride among community leaders who are longing for an economic turnaround on the South Side.

“My mother always taught me that no matter where you live, you take care of where you live,” said Baye Muhammad, Syracuse Parks and Recreation commissioner. “It is about caring for your community and it’s something that we had lost. This project shows we are committed to getting it back.”