The Raphael Centre hosted a “prize giving” gig at Khutliso Daniels Secondary School in February. Different from a school’s typical awards days, which honour academic achievements, the Raphael Centre event encouraged pupils to know their status and get tested for HIV, with those who were tested entering a raffle for a chance to win a bicycle.

The initiative is part of Khanya – Be SMART, the Raphael Centre’s campaign for better living. 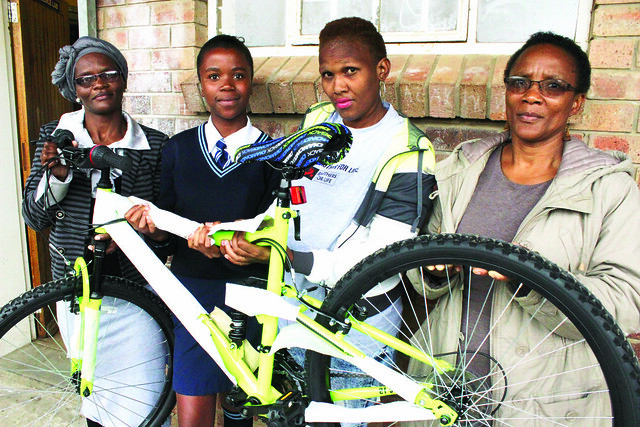 Raphael Centre Community Wellness Officers Zodwa Goje (left) and Nomfundo Thobi congratulate Khutliso Daniels Secondary Grade 9 pupil Nosiviwe Twani on her prize of a bicycle in a draw she and 23 other pupils entered at the school. They qualified for the draw by opting to be tested for HIV so they could know their status. | Sue Maclennan from Grocott’s Mail provided to The Stand

Khanya translates as “be bright.” “SMART stands for: Shine – Mind – Act – Raffle – Test. It closely refers to the procedure of this project where youth are motivated to take responsibility for their health and to test for HIV,” according to the Raphael Centre. “Finally — as a bonus — every youth who tested for HIV can enter our bicycle raffle which takes place with each high school with who we have collaborated.”

Before being tested, pupils under age 16 were given a consent form that a family member had to sign.

Nosiviwe Twani won the bicycle and was excited to do so. “I am very happy,” she said.

Campaigns like Khanya – Be SMART are crucial in South Africa because the youth and young adults between ages 15 and 24 have the fastest growing rate of HIV infection, according to the Raphael Centre.