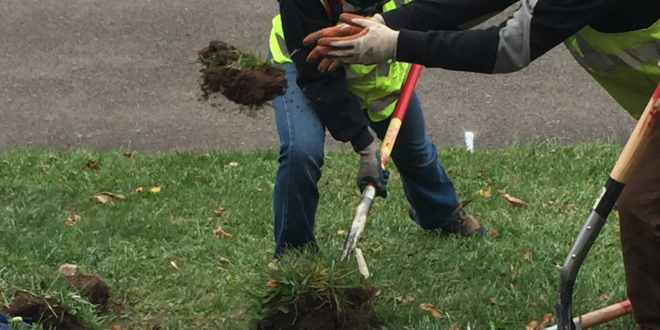 In a new report, “State of the Urban Forest,” Syracuse officials estimate the city saves nearly $1 million a year through trees absorbing rainwater runoff that would otherwise overflow the sewer system.

The report lays out several benefits that trees provide to the city, including improving the air quality and temperature of neighborhoods. That awareness has caught on among city residents, like the dozens who gathered one recent weekend in Onondaga Park, west of South Avenue, to plant trees along neighborhood sidewalks. 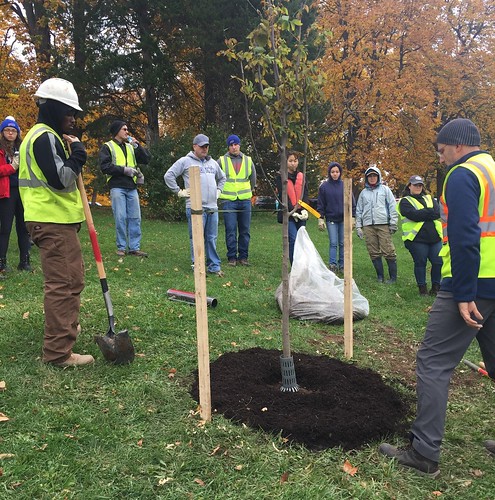 The report states that on an 80-degree day, neighborhoods without trees can be as much as 12 degrees warmer than those with trees. On tree-lined streets, natural cooling can have a positive financial impact for local merchants. “It’s been determined that business districts with tree-lined streets have people linger longer and spend more money,” Harris said.

One of the most tangible benefits trees provide is curbing stormwater runoff. Onondaga County’s Save the Rain program has reported that a single tree, through its root system, can soak up 2,000 gallons of water each year.

“Historically, we’ve had a lot of challenge with combined sewer overflow,” said Madison Quinn, a project coordinator with Save the Rain. “When there’s too much rainwater, it overflows into the lake and its tributaries,” Quinn said, referring to Onondaga Lake. “Trees reduce that occurrence.”

Quinn said that the county had once planned to build several water treatment facilities to help clean the lake. When County Executive Joanie Mahoney took office, however, she halted that plan in favor of creating a green infrastructure.

“This is better for the triple bottom line,” Quinn said. “Environmentally, economically and socially.”

The city estimates that trees soaking up stormwater runoff save close to $900,000 a year, over the cost of treatment plants. Inevitably, not all trees survive. Save the Rain combats that, Quinn said, by continuing to plant trees. To date, it has planted more than 6,000 trees.

One Saturday in November 2016, nearly 100 volunteers gathered in Onondaga Park to plant more than 100 trees in adjacent neighborhoods. Volunteers ranged in age from young children to older adults — dressed in boots, jeans and neon safety vests.

“I’ve never planted a tree before, so I’m excited,” said Becca Rock, a student at State University of New York College of Environmental Science and Forestry who heard about the event from an advertisement on campus.

Representatives from Save the Rain, National Grid and the Onondaga Earth Corps led the planting, after first demonstrating to the volunteers the best methods for tree planting. First, they hacked away the top level of sod and grass, then dug into the ground. They put in the sapling, poured the dirt back on top and stomped it down, then spread rich, black mulch around the roots with their hands.

Jim Maloney, an arborist with National Grid, led a group of volunteers into a neighborhood to start the day’s planting. By noon, he and his group had worked three hours. “Most of this planting is driven by the rainwater benefits,” Maloney said. “But the reciprocal value is the communities get trees.”

In the neighborhood, Maloney pointed out the places where trees would be planted, which had been spray-painted on the grass. After setting up one group, he jogged across the street to help another one get ready. A truck pulled up with shovels. Maloney gave shovels to the volunteers, and they went to work.

“Neighborhoods just look so much nicer with trees,” he said.