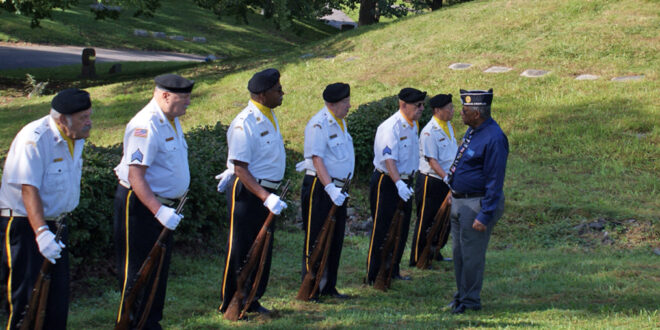 Black Civil War veteran James Jameson, nearly a century after his death, finally received the headstone he had long deserved.

“For giving their bravery, courage and time, and in many cases, their lives to a country that didn’t always show them the same loyalty, that’s true selflessness,” Sen. Rachel May said.

The four veterans had been buried in unmarked graves in Syracuse. The Historic Oakwood Cemetery Preservation Association (HOCPA) is in the process of providing proper headstones to each.

Sharon Owens, deputy mayor of Syracuse, said a few words about the challenges that these young men took on, despite living in a country that did not classify them as whole human beings at the time.

“They, as many other African-American people did, stepped forward as the first to do something that in the minds of many people made no sense,” Owens said. “But it is that character and fortitude that caused them to lay their lives on the line for freedom for themselves and their families, and the unity of our nation.”

Pastor Nitch Jones, of Progressive Youth Ministry at The Grove, paid respect to the soldiers and honored their memory.

“We must pay tribute to those soldiers, the unsung heroes in our midst,” Jones said. “To the fallen soldiers, we say a good fight you fought; to the ones we have, we say thank you.”

Sue Greenhagen, a member of HOCPA and Daughters of Union Veterans, provided historical background on Jameson and the other Black Civil War veterans.

“The four Black veterans we honor today answered their nation’s call,” Greenhagen said. “These veterans rightly deserve the honor we bestow upon them today.”

Jameson was born in Syracuse. His father was a porter, and his mother was a cook, but both died when he was young. He and his sister were adopted, but she was eventually given away, and he never saw her again.

Jameson ran away at 11, but returned five years later to Syracuse to open a barber shop.

How did Jameson go from being a barber to fighting for the Union? It turned out to be the result of a lengthy recruitment process.

The first official Black regiment in Massachusetts was lacking in recruits, so recruitment was opened to other states. A letter written by Frederick Douglass appealing to potential Black recruits was distributed to various towns.

Jameson, perhaps inspired by Douglass’ letter, went to Albany, and then to Readville, Mass. to enlist. He became part of the 54th Massachusetts Infantry in 1863.

Jameson fought at Fort Wagner in South Carolina. He survived the battle and eventually returned to Syracuse to continue barbering.

Jameson retired in 1914 and died in 1924. He picked out his casket but never received his headstone.

After each guest spoke, the event concluded with the flag ceremony, laying of flowers, gun salute, playing of taps and the dedication of the stone.

Marion Ervin, Army 1st Lieutenant and Vietnam veteran, appreciated the recognition the veterans received. He says it will take asking for money to speed up the headstone process.

“Just got to find a way to reach them,” Ervin said. “There’s plenty of money around.”

James Bass, Onondaga County American Legion Commander and Air Force veteran, plans to get the word out on Facebook and other outlets.

“To me, this is fantastic,” Bass said. “We need to make more people aware of what’s going on and what happened in history.”