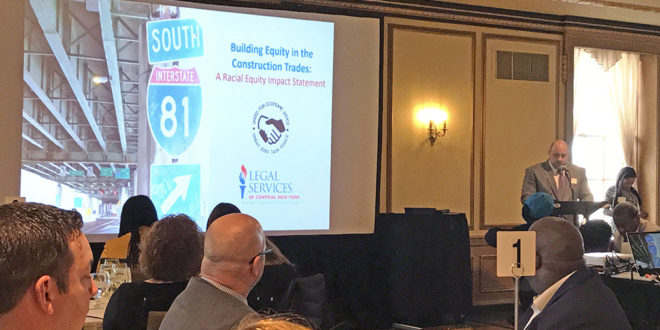 Study Released on Creating Equitable Jobs for Future I-81 Construction

The I-81 Viaduct Project is a looming multi-year construction cash cow with projected costs in the billions. No matter what option is chosen, the result will provide well-paying construction jobs to thousands. A local group, the Urban Jobs Task Force (UJTF), is tirelessly working to see city residents and minorities be on that payroll.

The group unveiled a year-long report, “Building Equity in the Construction Trades: A Racial Equity Impact Statement,” Thursday, March 14, at the Marriott Syracuse Downtown to a packed ballroom. Attendees included state, county and local representatives; area contractors; union representatives; workforce developers, and community members. UJTF says it plans to further address the report’s findings and recommendations in upcoming forums, after community members have had time to review the full report.

UJTF also honored volunteer Aggie Lane with a “Building Equity Service Award” for her decades of dedication to pushing for racial equity.

The 152-page report prepared by UJTF and Legal Services of Central New York revealed parallels between the destruction of communities caused by I-81 to the city’s current rates of poverty. UJTF President Deka Dancil pointed to spots on two Syracuse maps: a 1937 map of redlining districts to one highlighting concentrated pockets of poverty today.

“If you cross reference by street names, it’s nearly identical,” she said, with the noted exception of two census tracks where a majority of Syracuse University students now live.

The report hopes to encourage policy change and open up trade unions to create greater opportunities for the minority, female and local workforce. A challenge for I-81, will be navigating federal regulations like the Disadvantaged Business Enterprise (DBE) program, which is a distinction that many New York State Minority/Women Business Enterprise (MWBE) programs do not also hold.

Lead author of the report, Andrew Croom, noted that in Syracuse white adults are 21 times more likely to have a construction job than blacks.

Still with stark data, the report left a hopeful tone, stressing the I-81 Project can be an opportunity to revive the city’s struggling economy. The report’s creators want it to serve as a foundation for community advocacy and identify systemic changes in education, training and employment opportunities that will lead to reductions in the poverty and hopelessness that plague Syracuse.

For Dancil, a black female who grew up in the city, the report is personal. Generational poverty and few options other than low-wage jobs is something she sees as widespread.

“This is important to me because the people impacted by these policies are my family and friends,” she said.

Several local men who work in or desire to work in the trades came up to share their stories too.

Isom Enoch, with the New England Regional Council of Carpenters Local 277 in Syracuse, shared that he was working at a gas station before being encouraged to apply to the carpenters union in 2018. Through the union he has found work and stability, because he now has a job for life.

“Life is all about taking advantage of the opportunities that are given to you,” he said. “Now I have a career, and I am doing something I truly enjoy. The need for carpentry work will never die.”

Shendu Tucker, a junior at PSLA Fowler, grew up helping his uncle with repairs and projects around the house. He came to enjoy the work and see it as a future path.

“A career in the trades can provide me a strong future,” he told the crowd of construction stakeholders in the audience. Next asking: “I hope you’ll give me a chance once I’ve graduated.”

New J D Taylor trainee Dwight Jackson said previously he had been working at Tully’s earning $7.50 an hour. Pushed by his girlfriend to earn more, he sought guidance from his cousin who is in the construction industry, Darian Coker of The Coker Corporation. Jackson wanted to purse and obtain a well-paying job before he had a family to support.

He started at Syracuse E.O.C. for the Construction Training Program, and completed despite some challenges.

Lamar Middleton from Hope 4 Us Housing, a training program for youth, closed the evening by telling attendees they must do more than sit back and watch young men take the pathway to prison. Addressing the contractors in the room, he said each of them needs to work on creating opportunities.

— Article and Photos by Ashley Kang, The Stand Director