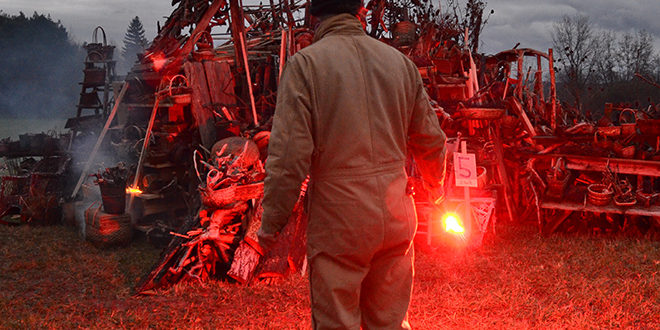 Carrying Anomalies to the Fire

Artist and former NFL player Jim Ridlon stands amongst a crowd at the Stone Quarry Hill Art Park for the premiere of his newest collection, “Nature’s Bounty.” The exhibit consisted of wooden anomalies that bear abstract resemblance to the skulls of extinct animals and faces of ambassadors to the United Nations.

As his sunken blue eyes hover over his work, a wry smile emerges from the corner of the 84-year-old artist’s mouth, his broken nose scrunching up.

“At the end of the exhibit, I’m going to burn this all down,” he quips to a nearby patron. The absurdity of his statement belies his sincerity. When “Nature’s Bounty” concluded on the third of November, Ridlon gathered his work and set it ablaze upon a pyre constructed by his eldest son, Jim Jr. The collection, comprised of over 100 pieces, took nearly five years to make — and then became ash. 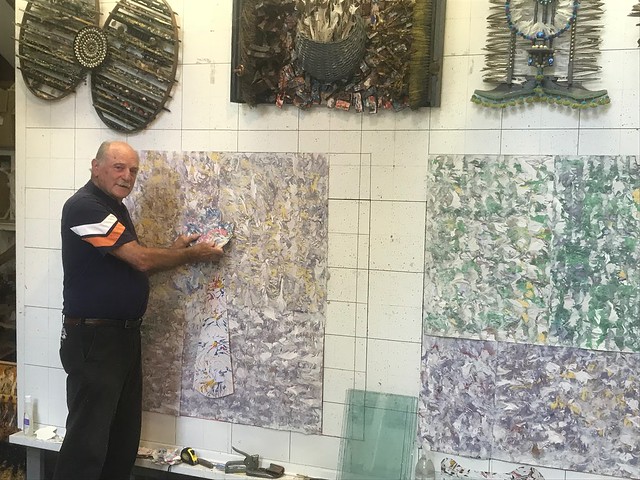 Like many others his age, Ridlon is grappling with the transition into the twilight of his life, through art. According to a study by Dr. Raquel Stephenson, an arts therapist at Lesley University, seniors flock to art because it imbues them with a sense of purpose, while also helping them come to terms with their legacy. In the mainstream, it can be seen in acts like the Rolling Stones refusing to call it quits, or George W. Bush painting in order to deal with the guilt from the death of soldiers during his presidency.

Though Ridlon fits within this continuum of older artists, art isn’t something he came to recently. It’s a passion that has been within him his whole life.

In elementary school, Ridlon was diagnosed with dyslexia and was subjected to merciless torment by classmates and teachers. From this trauma, Ridlon discovered his voice through art.

“I was better than them on the playground, and when you got the crayons and the paint out, I was the best in the class,” Ridlon said. He honed those skills into adulthood.

Ridlon accepted an athletic scholarship with Syracuse University in 1953 and graduated in 1957 with a fine arts degree. That same year he was drafted by the San Francisco 49ers.

Growing up, Ridlon’s eldest son wondered why his dad subjected himself to such pain during his playing days.

“I always remembered him coming home hurt. But I did listen to his determination, his grit,” Ridlon Jr. said. He came to realize that for his father, football was a part-time job that helped him fund his pursuit of a master’s degree.

“Football was always a means to an end,” Ridlon said, waving his hand dismissively. “There was no real big choice about when to leave football, I left when I was secure in my education.”

That came in 1965, when Ridlon moved his family to Syracuse and took a job coaching and teaching at Syracuse University, which allowed him to provide for his family and finish his MFA.

In the five decades since his retirement from the NFL, Ridlon has been commissioned by organizations such as ABC, Disney and more. Yet, money has never been the objective of his artistic career. Ridlon sees art as his sole purpose in life, the thing he was created to do. It keeps him moving forward, jumping at opportunities to try new things. If it were about money, he wouldn’t have set fire to “Nature’s Bounty.”

Instead, this immolation allows him to revel in spontaneity and practice letting go of something finite. It also helps turn the page on the next chapter of his work.

Ridlon’s “Life of an Artist” collection presents that next chapter. It’s a 29-piece semiautobiographical set of paintings that tell the story of an artist’s journey — from the point they’re first enamored with art, to the moment of self-actualization upon exhibition.

At his studio — a converted two-floor shed with no central heat out in New Woodstock — stretching canvass portraits with his son, Ridlon shed more light on “Life of an Artist.” It’s a collection he feels he could have only done at this point, with the final stages of his life on the horizon.

“It sucks, because you know you’re going to die, and everything you’ve done up to that point, everything in here, will be trashed,” he said. Ridlon collected himself a bit and reeled back the dourness of his statement. He acknowledged that his art is part of the stamp he left on the world, no matter how small.

“It’s nice to leave something that once had a purpose, and still does,” he said. Despite all that, he still doesn’t see his work thus far as his legacy.

“I want to be remembered for what I do tomorrow,” his eyes scanned the hundreds of pieces of art tucked about the room, “not what I’ve done so far.” For Ridlon, “tomorrow” is taking a stab at poetry, getting on social media and figuring out a way to get central heating for his quaint, wooden studio.