Hollis “Larry” Mathis is a foreman for the city of Syracuse in the Department of Public Works. He has worked there for more than 35 years. Isaac “Ike” Wynn has driven for Centro for nearly as long. They are the founding members of the group UAD.

For Mother’s Day, the duo is going to produce a show, which will be held Saturday, May 12, at the Palace Theatre on James Street.

It will feature more than 20 of the area’s favorite artists, musicians and singers.

Some of the talent includes Michael “Mike” Houston (of Michael & Anjela Lynn, with the Talented Ones), Rick Linzy (of the Soul Mine band) and longtime local favorite Donna Alford (of the Soft Spoken band). The show will be hosted by Julius Edwards, a talented emcee and the new executive director of the Dunbar Center.

Over the past 15 years or so, Ike and Larry have produced a great number of shows. Generally their shows have a purpose.

“This show is to salute and give honor to mothers,” Larry said.

“It’s all about family, too,” he added. “Everybody in the show has a family-like tie with UAD.” They have sung in the group or “they’ve just been close to us.” 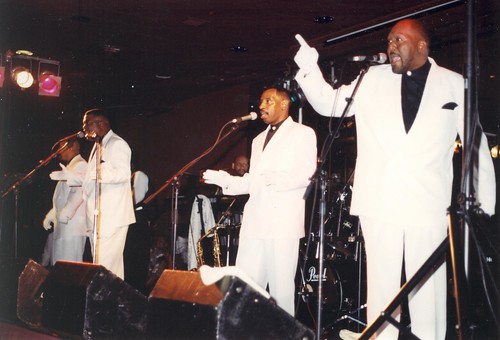 Larry and Ike’s relationship dates back to the 1970s, when they began singing together.

Their name UAD stands for Uplites, Avatar and Destiny, which incorporates the initials from some of the groups in which one or both of them have sung.

Their first show under the UAD moniker was held in 1997. They performed in tradition, as a four-man singing group similar to the Temptations, the Manhattans or the OJays. The group uses tight vocal harmonies and choreographed dance steps to entertain audiences. The performers are also known for wearing highly stylized and coordinated outfits.

Darryl Brooks has been living and performing in the Rochester area for more than 13 years, but has sung with Ike and Larry periodically since the 1970s. He acknowledges that being compared to the Temptations and other groups is fair, though he quickly points out that the uniqueness of UAD is that “each individual in the group is given the spotlight.”

Larry confirmed that. In fact what’s new and unique to the upcoming Mother’s Day show is that UAD has stepped entirely away from the traditional singing group’s format and will not perform as a group at all. “All of the performances in this show will be solo,” Larry said.

Ike still enjoys the traditional singing group approach but is welcoming the change. “You know the guys like Brooks, Rick and Mike (Young) and me are going to be old school anyway, but some of the younger guys like Seth (Marcel) and maybe XL are going to bring that new flavor,” he said. “It’s going to be a good show.”

Jonathan “Blaze” Dale, 34, is another of those younger guys that Ike mentions. He is the bass player for the Brownskin Band, Brownskin will perform and act as a backup band for all the artists in the show. John appreciates this opportunity to play behind some of the “more seasoned veterans,” he said.

“It’s a blessing,” he added. “Five years ago I wasn’t doing this. My goal is to the keep the bass lines as close to the originals as possible. Back in the day, bass players were funky. I’m going to try to keep that.”

The following that he and his fellow band mates attract are generally a little younger than the typical UAD crowd, so the audience could be diverse in age.

With a focus on family, as Larry suggested, we might see some younger people bringing their mothers out for an enjoyable evening. That is what Greg Collins, the youth pastor from Tucker Missionary Baptist Church, wants.

“This is a Mother’s Day show but a lot of people don’t celebrate Mother’s Day,” Collins said. “In my heart I know who I’ll be singing to, and that’s mothers. I’m going to be singing songs that some of the mothers will appreciate.”

Collins, who will perform a tribute to artists, said he’d like to be introduced as “the pastor who sings love songs” because “that’s what God is all about, love. And that’s what I plan to sing about.”

A few others on the show’s bill are Paul Lee (of Bobby Green and A Cut Above), Busty Baker and James “Saul” Brown (of the After FX band).

Have a Friendly Five suggestion?
Contact Reggie at reggie@softspokenband.com
or (315) 479-9620.