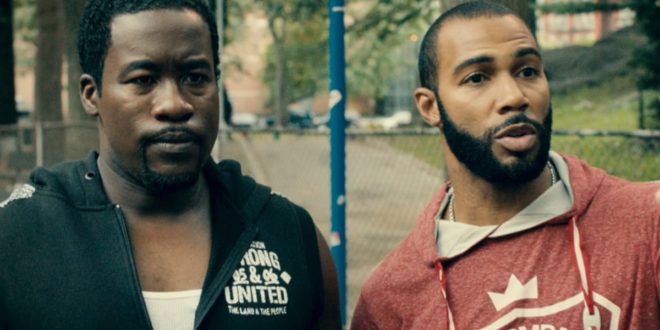 Syracuse University alumna Moikgantsi Kgama founded ImageNation in 1997. She is currently based in Harlem, but was raised in Syracuse, graduating from Nottingham High School in 1989 and SU in 1994. For some time, Kgama has wanted to bring her work back to her hometown.

Kgama lived in the South Side of Syracuse from age 5 to 12 years old. She used to teach African dance at a Catholic school, and her father used to work at the Southwest Community Center.

“The community has changed a lot since I was there,” Kgama said in a phone interview. “The violence wasn’t like that when I was growing up. A lot of us who have moved away are pretty surprised to hear what’s happening at home.”

The neighborhood’s current level of volatility was a major consideration when choosing a film to screen, she said. “I thought this was a film that could lead itself into a good conversation about what is happening at home,” Kgama stated.

“Chapter & Verse,” the independent film to be screened, is set in Harlem and about a man named S. Lance Ingram, who has been in prison for eight years. Previously, he was in a gang and involved in street crime, but when he returns home, he wants to change his life and have an impact on the community. In the process, he takes on responsibility for a young teen that he wants to keep away from entering the street life.

In addition to the film screenings, the event will feature a reception with music spun by DJ K. Black, two complimentary drinks and popcorn, a Q&A with director Jamal Joseph and food sold by Soul A La Carte. Two time offerings are offered: 5 p.m. or 7 p.m. with the reception taking place in between the two shows, from 7 to 8 p.m.

Joseph, who is a professor at Columbia University’s grad film program, was the school’s former dean but stepped down in order to pursue the film. Joseph is a former member of the Black Panther Party and completed eight years in Leavenworth prison, which helped form his perspective on the topic.

Kgama hopes this film and others in future screenings will emphasize the humanity of black people worldwide. “I think that there is a community in Syracuse that will respond to the content that might be yearning for progressive images of people of color.”

She is currently trying to develop audiences for independent films and find future locations where she might be able to open a cinema. Right now her organization is working to develop one in Harlem.

“We are raising money to develop it into a cinema café, and I would love to do something similar in Syracuse,” Kgama said. “A place like the Redhouse would be awesome or it could be developed.”

She wants the community to think of this event as a place where people can come, have a good time, network and learn something. She is hoping they will be inspired to address issues in the film. Her goal is to introduce the brand, the type of media she supports about the global black experience, and films that emphasize humanity.

“I would love to see this develop into something more, but right now it’s just the concept that I am bringing to Syracuse to build an audience, to see what the interest is and to provide another outlet of cultural entertainment,” she explained.

Tickets to the full event are $20; film screening only is $10. To learn more, visit here

— By Sarah Perkes, The Stand intern