Mary Nelson envisions basketball and tennis courts next to her center

For weeks last winter, snow covered the empty grass lot just north of the Mary Nelson Youth Center. But that’s not what Mary Nelson sees now. What she envisions is what she hopes will be a reality in just a few months: a neatly paved lot with two basketball courts and a tennis court for the children of the South Side.

“I really want to make this happen,” Nelson said. “You look in this area, you don’t have any type of outdoor activities. No basketball court, no nothing.”

The nearest public basketball hoop is down the block, she pointed out. But it’s only for the residents of that neighborhood. That’s not how Nelson runs her nonprofit center, which is open to all. The Mary Nelson Youth Center, located at 2849 S. Salina St., offers services for not only children, but adults, as well. 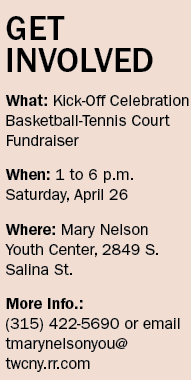 The center’s core focuses, Nelson said, are education, health, careers and mentorship. It offers free breakfasts, lunches and dinners throughout the week. It also provides programs for children after school and for senior citizens and young adults.

Nelson is not only the president and CEO of her center, but also has a full-time job in radiology at Upstate University Hospital. She has owned the center since 2009. It is named after her registered charity, Mary Nelson’s Youth Day Foundation.

She is always looking to improve her facility and hopes to update the center’s outdated computers. And then there is the empty field of grass that separates the Mary Nelson Youth Center from the next building to the north. 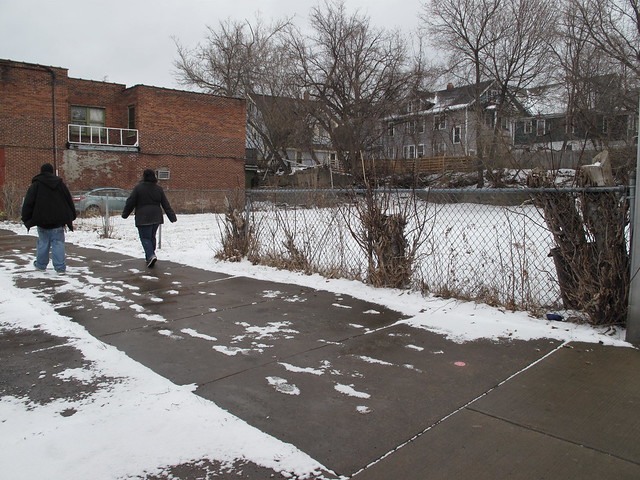 This empty lot just north of the Mary Nelson Youth Center located at 2849 S. Salina St. may soon be transformed into basketball and tennis courts. Mary Nelson hopes to raise $12,000 from the community to make her vision a reality. | Ashley Kang, Staff Photo

Amatullah Yamini owns the lot and Salina Shoe Salon, located just up the block at 2809 S. Salina St. Yamini said she has been contemplating selling the lot for a while, and she always told Nelson that if she were to sell it, Nelson would be the first person she would approach.

Now, Yamini said she is close to selling it. She did not disclose the price she and Nelson have discussed. Nelson said she hopes to reach a deal and break ground in the spring.

During summer, Yamini allows Nelson to use the lot as a place for the children to play. But Nelson has bigger ideas.

“There’s no place in that area for children to play basketball,” Yamini said. “I think it would be wonderful if she would be able to do that. I applaud the work that she’s doing.”

Nelson estimated she would need approximately $12,000 to have the grass ripped up, concrete pavement laid down and two full basketball courts installed. She would also arrange for a few trees to be removed and a parking lot established. Most of that money will come from herself, but she will take all the help she can get in making this dream of hers come true. A fundraiser will be held later this month.

“Why not give them something where they can have something to do every day?” Nelson said. “The kids have nothing to do. I’m hoping they can start having pick-up tournaments, things like that … different tournaments being held right here. It would just really uplift this area and this part of the city.”

Ever since Nelson lost a nephew, Darryl Patterson, to gun violence in June 2002, she has taken it upon herself to help the South Side.

The lobby of the center displays the handful of plaques and awards that Nelson and her center have accumulated in the five years she has owned it.

No honor stands out more to her than The Harriet Tubman Humanitarian Award she received in 2010. It is an award that recognizes New York women who generously devote themselves to improving the quality of life available to the poor, the powerless and the persecuted.

“I took a tragedy and made it into something positive,” she said. “I could’ve said, ‘Things aren’t going to get better.’ But they are. When God anoints something, it’s a blessing.”

Nelson’s son, Larry Moore, stands next to his mother as she shares this sentiment and adds his own idea of things to come.