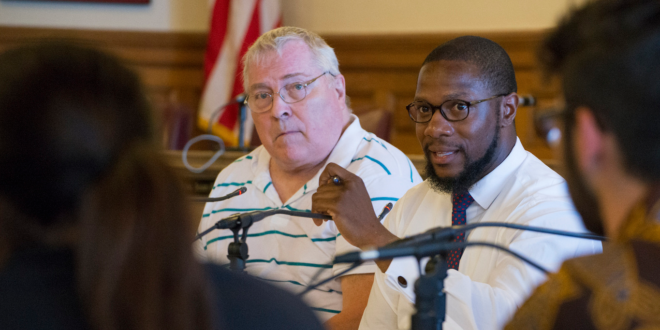 His elevator pitch to Syracuse residents reads like a script for a radio commercial:

The new CRB administrator concludes: “The Citizen Review Board investigates allegations of police misconduct or police overreach. To contact us ….” 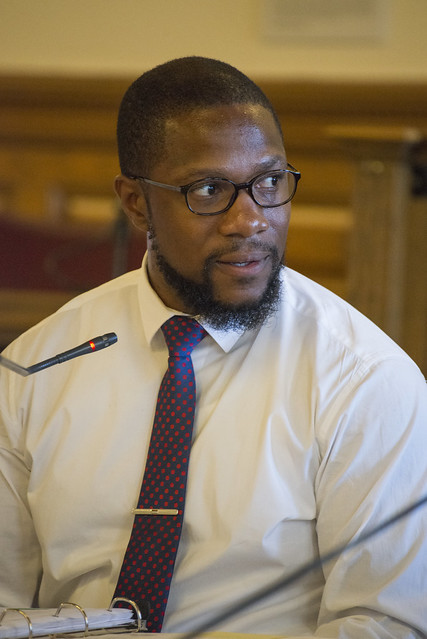 David Chaplin II, who previously worked as an attorney with the city focusing on labor issues, was hired to the civilian oversight group amid an ongoing lawsuit with the police department. That lawsuit was decided in favor of the CRB in August. Additionally, by his second week, he was welcomed with the chaos of June’s police-involved Father’s Day shooting. A chaotic melee on Syracuse’s Near West Side June 19 resulted in the death of Gary Porter, his pregnant fiancé being shot in the leg and a 15-year-old girl injured.

Police say at least four guns were fired, including one by officer Kelsey Francemone. Video footage shows a chaotic scene and shows Francemone running against the fleeing crowd. She soon goes off frame, toward the direction where Porter was shot. More than a month after the incident, Onondaga County District Attorney William Fitzpatrick said that a drive-by shooting that appears to be gang related started the disorder. On Aug. 5, Francemone was cleared by a grand jury of any wrong doing.

While Chaplin was content in his former position, he says he didn’t find it particularly fulfilling. He said the CRB opening came on the heels of two high-profile police-involved shootings. In 2014, Michael Brown was shot and killed by police officer Darren Wilson in Ferguson, Missouri. The 18-year-old black male was shot at least six times, twice in the head, by Wilson, who is white. His body was then left uncovered — in public view of family and neighbors. Also in 2014, Tamir Rice, a 12-year-old black boy, was shot and killed by police in Cleveland when officers mistook a toy gun the preteen was holding as a threat. Both incidents, among several others, received national and international attention.

“It’s my own community that is hearkened with the issue of police misconduct,” he said, noting this job allows him to not only work on social injustice but also to provide greater access to justice — for all groups.

“I think he’s been inspired by what’s been happening across the country with the increase in concern over police misconduct and the negative and sometimes tragic outcomes that have occurred when citizens and police interact,” said Mallory Livingston, vice chair of the CRB.

Livingston, who is also a local attorney and co-founder of the Transgender Alliance and who helped pass Syracuse’s transgender civil rights law in 2012, joined to serve as a mouthpiece for the transgendered community.

“Being transgendered, I’m a member of a marginalized group,” she said. “A group that certainly on occasion has had negative interactions with police.”

Chaplin replaced Joseph Lipari, who served as CRB administrator since 2012. During Lipari’s nearly three and a half years with the group, a top highlight was seeing a decline in excessive force complaints. In a special report released May of 2016, the CRB noted that the number of force after fleeing cases fell from 23 in 2013 to four in 2015. Lipari moved with his family to New York City this past summer. He now works as a senior policy manager for the New York Police Department’s Office of the Inspector General.

In addition to handling complaints in a timely manner and meeting the requirements in the CRB’s charter, Chaplin wants the CRB to become a commonly known municipal service. Through community outreach at public events, social media and through a soon-to-launch eNewsletter, he hopes to keep the CRB on the public’s radar.

He also sees great strength in drafting special reports that can highlight local trends before they become another news headline.
“We don’t want to wait to have CNN or Fox News at our doorstep before we address these issues,” he said.

At the July 7 board meeting, common councilor at-large Jean Kessner stood up during the public comment period and said she would help promote the CRB in any way possible.

“I’m troubled by what I see in the news; it makes me feel in peril,” she said, stressing she wants all city residents to know about the CRB. “I’ll call a press conference for you, just tell me what I can do.”

Outreach was Chaplin’s first endeavor. He attended several public events, such as the Juneteenth Celebration, connected with local groups and has held meetings with top officials.

“He’s been especially good at working to increase community contact,” Livingston said. “He’s been active in telling residents we are one of those pieces to the puzzle to solve this problem everyone is concerned about.” 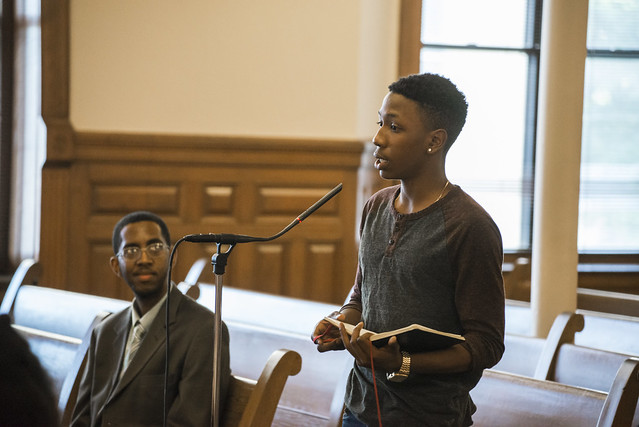 Board members listen as Henninger High School student Alexander Veranes, 16, speaks during the public comment period at the CRB meeting. Veranes noted that the CRB needs to work with schools to help educate students on how to safely engage with police. Veranes is the leader of a newly formed student group, Syracuse Students United, working to address issues students face citywide. | Ben Cleeton, Staff Photo

He also has met with Chief of Police Frank Fowler and said they are on good terms.

“He has been happy to work together to find effective solutions to problems,” Chaplin said.

To help address systemic injustice, Chaplin says he must bridge the previous gaps between the police and the citizens they are sworn to protect. His approach: view it like a marriage — where divorce is not an option.

One step in strengthening this partnership is the relaunch of the Police Liaison Committee, which is now back up and running. “This shows a good-faith effort by the police to work on and rebuild this relationship,” Chaplin said, noting the first issue to address is having them respond to the CRB’s policy on use of force.

Currently the SPD does not have a comprehensive use of force policy, according to Chaplin. The CRB board drafted a policy and hopes the next step is to have the Police Liaison Committee review it and start a conversation to create a set of up-to-date written guidelines that the SPD can adopt. Other efforts of this committee are to have open conversations and allow each group to pose questions and openly discuss current issues.

“The CRB not only hears complaints against the police, but we have the capacity to look into issues and draft policy to work with the police department to make policing in this community better for residents and officers,” Chaplin said.

Chaplin notes the process is slow and requires long-term thinking, but he says he is committed to stay the course, and finds reassurance from Lipari in frequent phone calls.

“You can’t get frustrated in the face of resistance,” Lipari said he told Chaplin. “I tell David to have patience and to be persistent.”

Being African-American does not make Chaplin any better suited for this work than Lipari was, Chaplin said, but he agreed it helps initially.

“‘Oh, CRB’s a brother,’” Chaplin said he’s heard when he walks out of his office. “That relatability, my personal experiences and being a part of that community helps.”

“Personally, I’ve been lucky,” he added. “My worst experience is driving while black.”

During stops in his lifetime, he said he felt the officer was rude initially, but he would be let go with a warning or minor traffic ticket after the officer reviewed his information and found he had no record.

“When the officer came back, they were fine and no longer rude,” he said, recalling one incident. “But I know my experience is unique.” 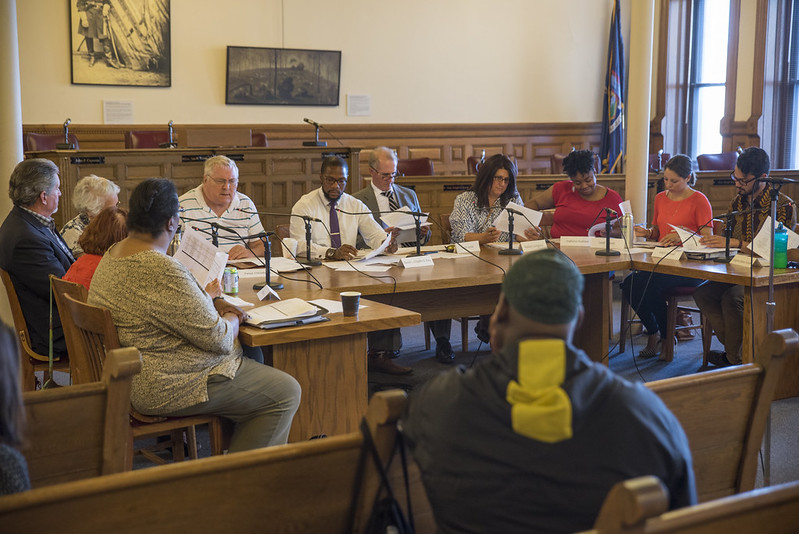 Chaplin grew up in poverty outside Chicago in an environment, he said, brimming with mistrust in the police. Shuffling back and forth between his father’s home in Peoria and his mother in the South, he eventually conceded to his parents’ concerns and completed high school in Georgia.

“When I went back home to Illinois, the problem of gang violence and drugs became a concern,” Chaplin said. “My dad didn’t want me falling into that.”

After friends were shot outside of school, he returned to Georgia in 10th grade. “You got to keep your head on a swivel,” describing the alertness required to walk home at night after sports practice. Moving back with his mother and brother, he said, definitely made a difference.

“She was a supermom,” he said. “She did not want me or my brother being a part of the trap that poverty has on people.”

Chaplin went on to graduate from college at the University of Alabama, to law school through the Legal Education Opportunity (LEO) Program, and graduated from Syracuse University’s law and public diplomacy schools in 2013.

“I’ve wrestled since college about being the only person in my family to really advance,” he said. “I put a burden on myself to look after my cousins and make sure they don’t fall through the cracks but to also show them there’s other ways of doing things than the common street life.”

With that in mind, he asked himself when posed with this job: “What are you doing today to make a difference?”

“It wasn’t easy to answer that question as a labor attorney.”

Now he is energized and eager to come to work each day — and nearly every weekend — to push within the system for justice.