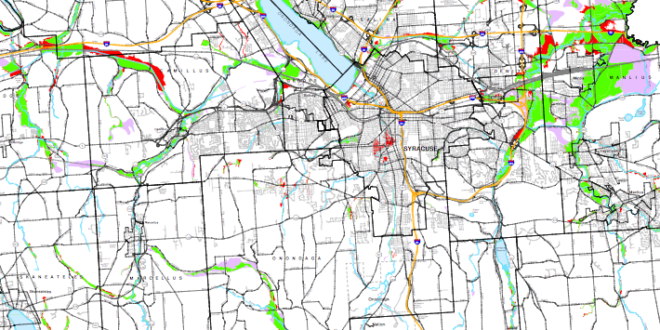 “I was in a basement when it happened,” he said. “The sector around the intersection of Midland and Bellevue avenues on the South Side was all covered with water. Also, Harbor Brook, a stream by South Geddes Street, overflowed.” Russ Houck, from the city’s Department of Engineering, added, “About 800 properties were damaged in this flooding.”

The Rev. Carter is the pastor of the Living Water Church of God in Christ, located at 121 Huron St., a mere half a block from the Midland-Bellevue intersection and from Onondaga Creek. On July 3 and 4,1974, a powerful storm system unleashed its fury on Syracuse and outlying areas. Thunderstorms and showers brought rainfall in excess of four inches over a 12-hour period, which led to the evacuation from their homes of more than a 1,000 residents in the city, including many on the South Side, and in the suburbs.

On Aug. 9, the pastor recalled the effects of the megastorm, which occurred when he was a 38-year-old minister, in front of 40 people attending a public hearing of the Syracuse Common Council Committee on Neighborhood Preservation, whose chair is Councilor At-Large Jean Kessner. Also in attendance were committee’s co-chairs Helen Hudson and Joe Nicoletti. Joining them at the table were some councilors who are not committee members: Steven Thompson, Sue Boyle and Nader Maroun. Khalid Bey, who represents most of the South Side in the council, was the only co-chair absent.

The purpose of the public hearing, held in the Common Council Chambers, was “to gather input” from local residents regarding the new Federal Emergency Management Agency (FEMA) floodplain maps, which came out in May, Houck said.

“A further 876 parcels were added as a result of the new federal mapping,” according to an Office of the Mayor press release. “The City of Syracuse participates in the National Flood Insurance Program which lowers rates for customers by subsidizing flood insurance for businesses and customers. To be eligible to participate in this program, the city must adopt the new federal Flood Insurance Rate Maps.”

The city intends to enact these maps in November.

The first segment on the agenda consisted of a presentation by Houck and Andrew Martin, chief of the Risk Management Branch for FEMA Region 2, based in New York City.

Houck said that the existing floodplain maps were created in the ’80s but, since 2005, the city has been working with FEMA and the New York State Department of Environmental Conservation to update them. To this effect, they have been collecting hydrological and topological information, including elevation data. The most recent efforts have derived in a new total of 1,602 parcels assessed to be in high-risk zones, defined as zones having a one percent likelihood of being struck by a flood in any given year, a phenomenon sometimes referred to as a 100-year flood.

Councilor Nicoletti said that it was “hard to comprehend” how, suddenly, so many new properties are being proposed to be included on the city of Syracuse flood zone parcels’ list. As a consequence, “people with no extra money will have no flood insurance,” he told Martin. 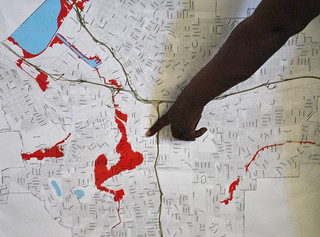 In 2012, the Federal Emergency Management Agency proposed to put 1,099 South Side properties into recalculated flood zones for the first time. | File photo

Martin said that the most recent maps were more reliable that the old ones in that the latter were made using methodologies that were “not accurate nor appropriate,” and, besides, now the government bodies involved have “newer information and better data,” he added.

The mapping technology available in the ’90s utilized a “quick-and-dirty” approach that was “far behind” the current technology, Houck said. The latest surveying endeavor required the use of airborne light detection and ranging (commonly shortened to lidar) sensors, which created a digital elevation model (DEM).

Still, Councilor Hudson seemed to remain skeptical of the validity of the prediction model advocated by FEMA. She pressed Houck for further clarification.

Houck said that Syracuse has only elevation data for the street level of properties but, unlike some other cities, doesn’t have this kind of data for the basement level of the same properties. Having the missing data could change the assessment of flooding risk for the properties. Modifying the dam in Onondaga Nation and the Onondaga Creek channel could accomplish the same goals, he added, with their costs estimated at being $16 million and $40 million, respectively.

In April 2009 the Onondaga Creek Working Group developed the Onondaga Creek Conceptual Revitalization Plan, whose implementation could have reduced the probability of flooding, but “financial and feasibility issues” prevented it from being fully carried out, said Richard Smardon, one of the group facilitators.

The floodgates of blistering criticism were widely opened after Councilor Kessner signaled the start of the final segment of the hearing. Only five common citizens had the chance to address the committee before Kessner said that it was 6:45 p.m. and she had to be at another meeting. The ones to speak were Tecia Evans, a South Side neighbor; Charles Vanderpool, an East Side resident; Don Radke, state director for the Greater Syracuse Association of Realtors; Rich Puchalski, Syracuse United Neighbors (SUN) executive director, and Walt Dixie, founder of the National Action Network Syracuse Chapter.

Community organizers Puchalski and Dixie was spotted having a long conversation in the back of the chambers before the hearing. They delivered a one-two punch in their public speeches with both coinciding in describing the situation that the neighbors face with respect to the flood insurance as a “nightmare.”

Puchalski predicted that Southwest Side neighbors won’t be able to pay for flood insurance and will be forced to abandon the area, which will, in turn, open the door for external investors to take over the land. “Having to pay $700-$800 for insurance is not good news,” he said. “We can’t get non-for-profits to come to the Southwest.”

Dixie said that he is the executive director of Jubilee Homes, which owns roughly 100 properties on the South Side, including one on the corner of South and Bellevue avenues, where a Price Rite supermarket is under construction. This parcel, along with 60 other Jubilee Homes properties, was added to the flood zone, he told the audience.

Dixie urged the city government to be “proactive,” to be “fair to people,” and to give them better “access to information.” Otherwise, they might have to “file an injunction,” given that the insurance disbursement is being “rammed down our throats.” He characterized this proposed disbursement as a way of “scamming people,” specially those “who live on fixed income.” The sewage treatment plant being on Midland Avenue was supposed to alleviate the flooding likelihood but this has not been the case, he suggested. He concluded by lauding SUN, represented by Puchalski, for being a “leader” in its stance against this extra insurance payment.

Radke, president of FM Realty Group, said that properties that have mortgages will be foreclosed if their owners don’t pay the flood insurance premiums. As a realtor, he will have to disclose this condition to potential buyers of these properties, which in his opinion will be worth less money.

Evans, of 253 Coolidge Ave., said that she has a disability and is on a fixed budget, which will make the flood insurance unaffordable to her, so she is contemplating moving out of the South Side if the Common Council ratifies the new maps.

Vanderpool, of 203 Brookford Road, who said he has been living on his retirement pension for approximately 10 years, calculated that the new insurance will cost him $4,800 for the four remaining years on his mortgage.

Martin said that FEMA will host a “big public forum” sometime in the first week of September, probably at the Southwest Community Center, to which the federal agency will bring “a lot of staff to answer all of your questions,” possibly including experts from LOMA, formerly the Life Office Management Association, a trade group in the insurance industry.

Dixie replied, “If you come to the Southwest Community Center with a discussion like this, all hell is going to break loose.”