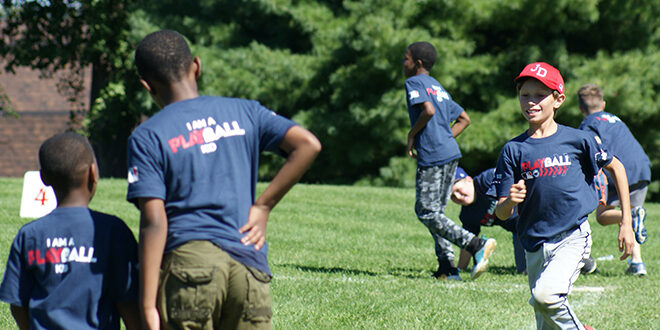 More than 130 youth gathered at Burnet Park Sunday a new baseball and softball clinic organized by the city.

“This is a chance to support the city and give kids opportunities,” Syracuse Mayor Ben Walsh said. “You can learn important life skills from playing team sports.”

The clinic is part of the PLAY BALL initiative, which is a partnership between Major League Baseball and the United States Conference of Mayors. The objective is to increase youth participation in baseball and softball.

“It’s good for their health to run around and have fun,” Walsh said.

Children from ages 6 to 13 took part in baseball drills within their own age groups, followed by playing in simulated games.

The event was hosted by the Syracuse Police Athletic/Activities League (PAL). Earlier this year, Syracuse PAL held clinics for youth football, basketball, dance and soccer. For this particular clinic, the end goal is the creation of a baseball league.

“Baseball is not dead in this city,” said Jimmy Oliver, director of community engagement with the Syracuse Police Department. “We just need to give the kids more exposure to it.”

Oliver, who grew up on the West Side of Syracuse and played baseball at Henninger High School, had nieces and nephews take part in Sunday’s activities. He hopes the clinic will show children that people in the community care about them.

“It’s the first step towards getting them involved in baseball without any barriers,” Oliver said.

Part of breaking those barriers was providing equipment to city youth. Visit Syracuse, the Syracuse Mets and philanthropist Adam Weitsman combined efforts to provide each participant with a baseball glove to take home.

Additionally each participant was gifted a PLAY BALL T-shirt, a backpack filled with school supplies and a box with non-perishable food. The event was catered by Who Want Smoke BBQ.

The Syracuse Police Department had several officers on hand to interact with youth attendees.

“Our goal is for the kids to have positive experiences and have a better appreciation for what the police do,” Syracuse Deputy Chief Richard Shoff said.

Shoff hopes that the clinic serves as a step towards improving relations between city residents and officers.

“The relationship between the police and the community has been strained at times,” Shoff said. “It’s very important to show that the police have a true dedication to the city.”

Kaelyna says the event was fun.

Many area coaches attended the clinic to provide instruction.

“It was a great starting point,” said Alex Minnoe, coach of the Syracuse City West junior varsity baseball team. “The kids did a great job staying focused and showing interest.”

Minnoe, a 2010 graduate of Henninger High School, was a three-year varsity baseball starter. He sees a need to expand interest in minority hopes those who attended were inspired.

“Their experience levels varied, but I think they gained confidence regardless,” Minnoe said.

Ruthnie Angrand, the city’s communications director, says the clinic was a great way to celebrate the city.

“We have a great baseball history in Syracuse,” Angrand said. “It was a healthy environment for the kids, and they clearly loved playing today.”