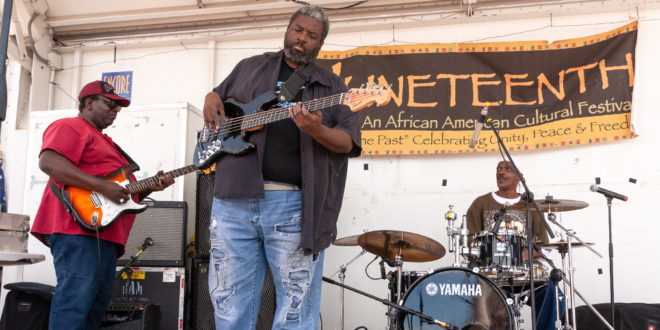 Syracuse's annual Juneteenth celebration is held each summer to commemorate June 19, 1865 when the last African-Americans learned slavery was over. | File Photo

New community engagement app will launch at this year’s festival

It was 20 years ago that Derrick Carr joined as an organizer for Syracuse’s Juneteenth Festival, and over his time, he watched as the festival increased in size. He said eventually it moved to downtown Syracuse.

“You’re exposing the whole Syracuse community to (Juneteenth) to realize the significant role African-Americans played in everyday society,” he said about the bigger venue.

Syracuse’s annual celebration is held each year in honor of the day slavery was abolished, and this year’s festival is scheduled to take place Saturday, June 15, in Clinton Square.

But the weekend celebration will kickoff Friday with a Flag Raising Ceremony at Syracuse City Hall starting at 10 a.m. Then Friday evening the Ancestral Celebration, which is sold out, will be held at the Atrium at City Hall Commons.

Saturday’s event will begin at 11:30 a.m. with the Victory Parade from the Dunbar Center to Clinton Square. Throughout that day, local vendors and community resources will be set up. The Gospel Showcase will begin at 1 p.m. and R&B and soul music starts at 4 p.m. The headliner is Keith Washington, an R&B vocalist best-known for his single “Kissing You.”

New this year, a mobile app designed to increase community engagement will be unveiled.

The app, Hello Syracuse!, is a tool to communicate time-sensitive information to residents — serving as a public safety alert. The goal is that through the app, the city can proactively communicate with residents and promote awareness of community resources, all while contributing to grassroots efforts to reduce violence and increase community pride.

The app launch has been made thanks to a collaboration with members from the city’s Innovation Team, which is overseeing the 2019 Startup in Residence (STIR) program; Zivics, a mobile app platform designed to increase civic engagement, and the Trauma Response Team, a city-funded initiative offering on-site care in response to violent incidents.

Adam Peruta, president of Zivics and an assistant professor at Syracuse University, has been working on Hello Syracuse! for the past five months. “The first thing we wanted to do is talk to various local communities in Syracuse to inform them about the project,” said Peruta, who held three public workshops to collect feedback.

After collecting data from these workshops, Peruta designed the app based on a previous project he launched at SU intended to boost incoming students’ involvement on campus. At its core, the app is a “game-ified” platform that notifies users of incidents of gun violence and other trauma inducing events in the city.

Aside from time-sensitive notices, Hello Syracuse! also shares announcements of community events and activities happening in Syracuse neighborhoods. The app features a community events calendar, social media feed and a directory of city and community resources. The app is managed by Syracuse’s Trauma Response Team.

Anyone can use the app regardless of the type of phone or data plan as an SMS sign-up option is available to stay attuned to public safety information, events and other alerts. Members of the Trauma Response Team will be on hand during the Juneteenth event to help residents download the app, try it out and learn more.

STIR, a San Francisco based organization that brings governments and startups together to solve community issues, approved Peruta’s pitch and is funding Zivics’ startup effort. In addition to Zivics, two other Syracuse projects are part of STIR. Camino, a permit management platform, will allow for collaboration and communication between both permit applicants and city employees, and Vite Labs, a crowdfunding platform, will connect low-income renters to people willing to provide no-interest loans for security deposits.

The weekend will conclude Sunday with another annual event. Southwest Showcase Sunday’s will run from 4 to 7 p.m. June 16 at Jubilee Park. The bands this Sunday are UAD with Hollis Mathis and Michael Houston. Food will be provided by Alamin Muhammad with We Rise Above the Streets and feature DJ Richard Boyer.