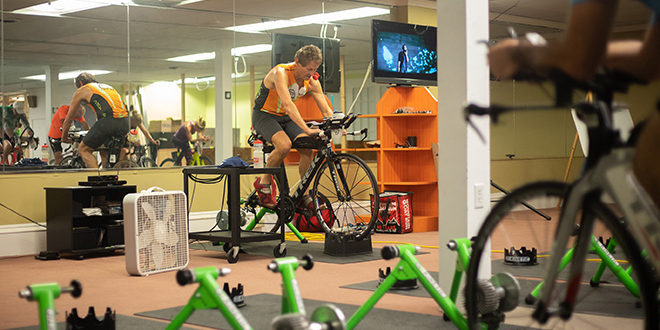 Rich O'Neil, a board member with the CNY Triathlon Club, leads riders on base training. | Cherilyn Beckles, Staff Photographer

A low-cost indoor cycling experience has arrived on the South Side just in time to help vaporize extra holiday calories and spin away the winter blahs.

Dunk & Bright Furniture on South Salina Street became home to more than home furnishings in November after the company started leasing space to the CNY Triathlon Club for its off-off-season cycling workouts. Memberships cost just $40 a year, although you’ll need your own bike.

The club was forced to relocate on short notice from its longtime home at ShoppingTown Mall in DeWitt. The mall, owned by Moonbeam Capital Investments LLC, has been fading into virtual eyesore status for years amid a tax stand-off with the town. Nonetheless, Club President Sam Sampere said the club enjoyed its time there and rent was always paid on time, despite a leaky roof that required water buckets on the floor to catch drips. The mall gave no reason for evicting the club, and took eight days to reply to Sampere’s calls.

“We don’t have to give you a reason,” Sampere recalls being told by ShoppingTown Operations Manager Leon Williams Jr. “Because we want you out of there.”

Mall officials did not respond to repeated requests from The Stand for comment.

But DeWitt’s loss is the South Side’s gain. A bit of good luck and a long-standing personal relationship helped make it happen. Initially, Sampere tried to phone Dunk & Bright’s owner, Jim Bright, a former tri-club member, to return some furniture the company had loaned the club years before. Sam instead ended up talking to Jim’s son, Joe, who is Dunk & Bright’s president.

“I got Joe on the phone, and I asked him: ‘Do you happen to have 4,000-square-feet you’d like to lease out to the triathlon club?’”

“As a matter of fact I do,” Joe replied.

And that was that. On a wintry Veterans Day evening, about 15 club members carried their bikes through the club’s dedicated entrance and into a spacious lower level storage floor for the second workout at the new location. Furniture that had occupied the area had been stashed elsewhere, and rows of stationary bike trainers — which hold a bike upright and apply resistance to the back wheel — were in place. The vibe was cozy and low-key but serious as the riders warmed up with a Eurythmics song pumping through the sound system. A floor fan was propped on a makeshift sawhorse formed by two metal folding chairs.

Among the athletes getting ready for the hour-long workout was Jill Walsh, a retired state trooper and elite Paralympian who competes in the trike division due to MS-related balance issues.

“Hopefully I’ll be in Tokyo in 2020,” she said, referring to the Paralympic games, her thoughts already having moved beyond the water buckets at ShoppingTown. “I was kind of expecting it,” she said of the eviction.

In addition to the 50 stationary trainers, the club offers, for a small additional fee, access to six computerized or “smart trainers” that measure pedaling efficiency and other performance benchmarks. Two dressing rooms, not fancy but functional, sprung up almost overnight thanks to the volunteer efforts of several members. There are also storage racks if you prefer to leave your bike at the spin studio.

Meanwhile, the novel use of Dunk & Bright’s space has added interest and intrigue to the working environment there.

The triathlon club partners with the Onondaga Cycling Club, whose members also have access to the workouts. Classes will continue through April, with five sessions offered per week plus some extra ones thrown in during the winter months.

Jeff Kramer has written newspaper columns for many, many years
in Syracuse and elsewhere. To contact him with story ideas, call (315)
420-2619 or email jeffmkramer@gmail.com