South Sider invites in musicians to sing, record and mostly have fun

Ozell lives on the South Side. He is a musician and singer and a longtime self-employed carpenter. Ozell used his skills to build a studio in his basement and a rehearsal hall in his garage. He christened the rehearsal space “Coop’s Boom Boom Room.” The name is a take on the imaginary place “Ray’s Boom Boom Room” that Eddie Murphy’s character, “Ray,” would often dream about in his movie, “Life.”

All for fun, over the past 15 years Ozell has opened up his space for aspiring musicians and singers to record, rehearse and basically have fun while honing their talents. He doesn’t charge for its use. He and his wife, Sandy, foot all of the electric and heating bills out of their own personal funds. 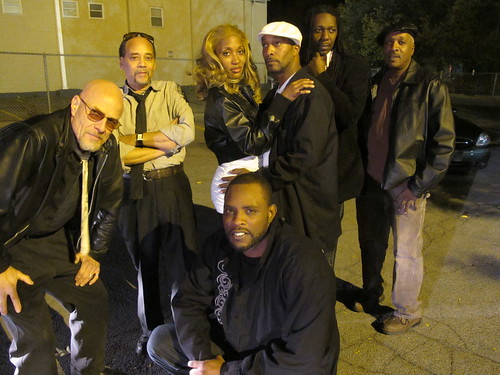 He also does it from the goodness of his heart. Those who know Ozell, know that he would give the

shirt off his back to help someone else.
Ozell, 48, has maintained a passion for music

throughout his life. He grew up with it. He shared with me that his family had a group when he was coming up.

“We were called the ‘Singing and Dancing Coopers,’” he recalled.

A few groups both religious and secular have found a home or have gotten their start in Coop’s Boom Boom Room. He mentioned a couple from the past who were close to his heart — the Family Gospel Singers with MB Atkinson, Will Solomon, Joe Ogletree and Gene Hill, all deceased, and Nu Element with Johnny Bowens, deceased.

Today, there is a new group he’s working with — Trump Tight 315.

“The 315 tagline on our name distinguishes us from another group in some other part of the country,” Jamar Lacey explained.

Jamar is the drummer and leader of the group.

He is no stranger to music. Jamar grew up in a musical family. His father, brother and uncles are all musicians and entertainers. In fact, Jamar started his career playing with his father, bass player Jimmy Lacey.

“What kept me playing drums was my dad,” he said. “He got me my first gig with him in a band called Rodney King and the Night Life Band.” 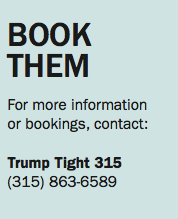 Jamar also has an uncle, C.P. Lacey, who performs impersonations of Michael Jackson, James Brown and other big stars professionally at the Apollo Theater and other international stages.

Doing this interview in the Boom Boom Room gave me a sense of who the members are as individuals and let me see where the band is coming from. Like the band, the room was lively and filled with music and laughter and had as much activity going on at one time as there could possibly be in such a small space. It was very friendly, open and inviting.

Eric “Love” Jones, who is essentially the front man for the group, is a very active stage performer. Drawing from his experience as a dancer and fashion model, he said, “I’m not afraid to interact with the audience. I let them know that there are no boundaries for us in having fun so I just get up there and be me. What you see is what you get.”

“Older singers gave their soul,” he said. “That’s what you’ll get when you check out a Trump Tight 315 performance.”

In the past half year since coming together, the band has performed at Mac’s Bad Art Bar, the 2012 Great New York State Fair, Dinosaur Bar-B-Que and private parties.

They are looking to play more.

Their musical style is hip-hop, R&B with a twist, and they want the public to know that their music is about having fun. The band’s signature song is Michael Jackson’s “Shake Your Body (Down to the Ground).”

Bernie Williford is the group’s musical statesman and director.

“Our group is different than most because we are a dance/show band,” he said.

Bernie has had plenty of experience with bands and musical organizations. Originally from Paterson, N.J., he came to Syracuse in 1998 by way of Tampa, Fla.

Bernie has performed on multiple instruments (i.e. guitar, bass and keyboards) since his youth. With this band, he plays keyboards. Bernie wants to build Trump Tight 315 musically into a unit so tight and funky that it can get anyone up and dancing.