When Mary Nelson held her first anti-violence community meeting, it was a large rally of residents voicing their opinions and calling the community to action. She has since stuck to her promise of organizing meetings on the first Saturday of every month, but they’ve taken on a more organized, relaxed tone. 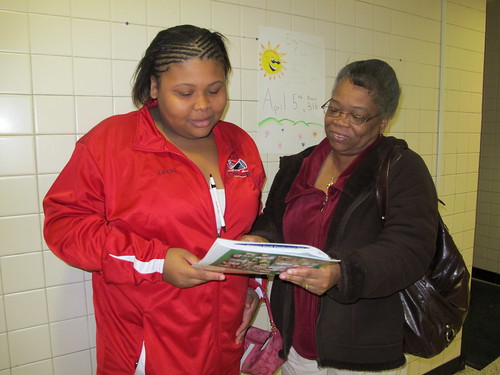 Lexus Cage, 16, and her grandmother Linda Cage of Syracuse look over the pamphlets they received at the Mary Nelson Community Meeting held Saturday, April 2, at Fowler High School. -- Photo by Durrie Bouscaren, The Stand Reporter

Nelson said that finding something for young people to do is especially important during summer break, because crime rates typically rise during warmer months.

“If you can’t work, volunteer somewhere,” she encouraged. “There are a lot of options. I want to see businesses opening doors, giving internships. Even if you can’t give a young person money, you can give them responsibility.”

Andrea Schnobrich from CNY Works gave students helpful information on how to fill out an application for summer employment. CNY Works interviews youth ages 16 to 20 and helps to place them in summer jobs within walking distance from their home. Her announcement that funding cuts had raised the minimum age from 14 to 16 was met with disappointment.

“We know [funding is] getting cut, but there are a lot of options. I want to see businesses opening doors, giving internships,” Nelson said after the meeting.

Gwendolyn Mack, who sits on the Board of Directors at the Mary Nelson Youth Center, says residents need to reach out and help each other to be successful.

“Back when I was growing up, there was a lot of unity in the community,” she said, “and that’s what we’re trying to get back to.”