In a matter of minutes, the 7-Eleven at the corner of South Avenue and Valley Drive transformed from business as usual to a standing ground on an issue timeworn to the community and its residents — safety. More than 100 community leaders and residents, seemingly spent by exclusion and violence, gathered to say they won’t stand for the assault that left 70-year-old Jim Gifford in critical condition. 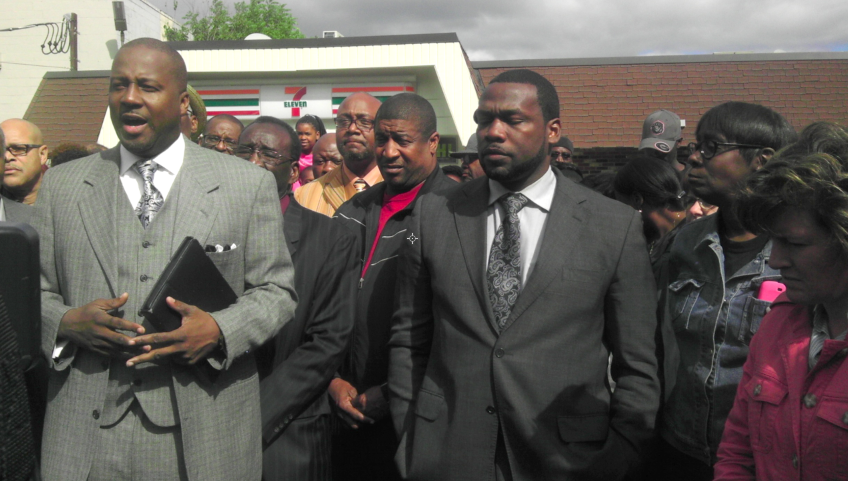 Pastor Daren Jamie speaks to the crowd on community safety Sunday, Sept. 22, outside the 7-Eleven.

At an afternoon press conference Sunday coordinated by People’s AME Zion Church pastor Daren Jaime, a crowd gathered of city officials, religious and civic leaders and a diverse mix of mostly older adults. Leadership sought to assure them — and potential offenders as well — that they reject violence and support the arrest of the young men suspected and at-large for Saturday’s assault.

While a motive behind the assault has not been revealed, rumors of a trending violent game called “knockout” has residents in worry. A prior and similar incident on Brighton Avenue took the life of 51 year-old Michael Daniels in May. Other incidents include a death in Hoboken New Jersey.

A Family-Court judge sentenced one of the assaulters of the Brighton Avenue beating to 18 months of confinement.  The boys who turned themselves in for a similar crime in New Jersey are all facing murder charges and have been remanded to the Hudson County Youth Detention Center, according to nj.com.

“We need to put some stricter pressure on the young people that are doing these types of things,” Paster Nebraski Carter said Sunday in Syracuse.

Carter and Common Councilor Van Robinson said they regularly visit the 7-Eleven for coffee breaks, and it could have been either of them, not Gifford, a South Avenue resident and a retiree who was assaulted by a half-dozen or so men in their 20’s when he left the store around 6 a.m. Saturday, police say.

While young people are suspected in the assault, Minister Mark Muhammad poignantly reminded adults and seniors gathered Sunday that children and teens feel this kind of fear every day, too.

“Today we get to see the reality that our young people are living with every day. They are walking into the schools and saying, ‘We’re afraid,’ ” he said.

As the crowds dispersed Sunday, some residents in jeans and others in their Sunday best began to intermingle. Some grumbled about the effectiveness of a rally in their neighborhood. Others began to speak with city officials and each other.

“We need to start having jobs for these youth,” said lifelong resident Emmanuel Snipes. Snipes owns a home on Midland Avenue. He said he’s often approached by youths wanting to learn about home maintenance and related skills.

He suggested practical solutions, such as employing young men to mow lawns and do landscape work. 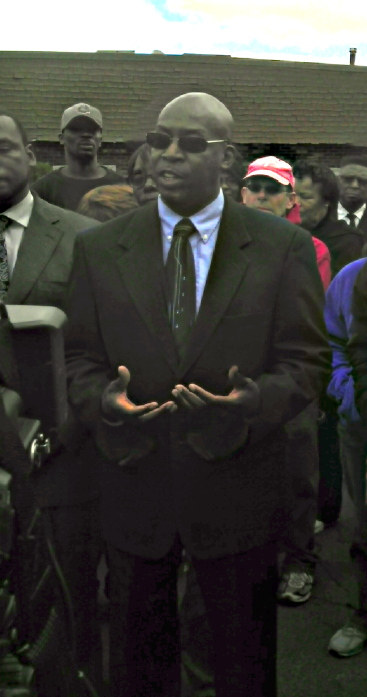 “I see no training centers down here,” said another resident, John Giles.

“I expect this neighborhood to get the same treatment as other neighborhoods,” Farrington said.

Farrington and Frazer said they’ve had to make number of calls to the city just to figure out who’s in charge.

“I’ve lived here all my life. I don’t usually have a problem,” Frazer said. He added in reference to Gifford, the recent assault victim: “And Jim, he don’t bother nobody. He’s the nicest guy.”

Pockets of neighbors huddled in mini-brainstorming sessions, throwing out thoughts or observations that might help make things better.

Among all the adults, there were just a few youths, including Christopher Jaime, 14, who says he came to support his father, the pastor who organized Sunday’s gathering.

“I think it’s a good cause to be here. It’s just a bad crime. It really shouldn’t have happened,” Christopher said.

7-Eleven Rally in Syracuse for The South Side Stand from Ruthnie Angrand on Vimeo.