Her food in particular, as this year’s fair would mark the debut of her Kickin’ Chicken Riggie Sauce at the New York State Fair. It was going to be sold in the Pride of New York building.

New to the food business, Herrin did not know what to expect. She wondered how her sauce, a creamy tomato sauce for chicken rigatoni, would sell. “I was hoping it would be on the shelf, praying that it would have a slot there,” she said. 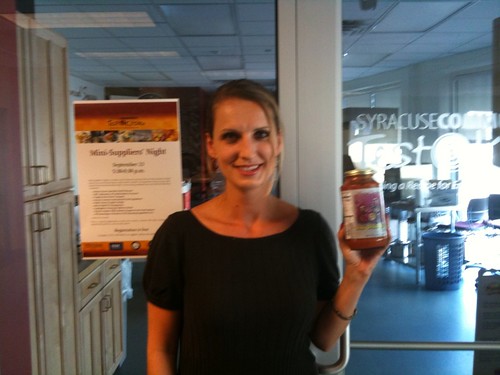 Rachel Herrin, creator of Kickin' Chicken Riggie Sauce, stands in front of the Syracuse Community Test Kitchen (COMTEK), a program based out of the South Side Initiative Center that helps people start their own food based business.

In the end Herrin had nothing to worry about. Her sauce made it to the shelves and sold well. The main reason the sauce was there though, was because of the Syracuse Community Test Kitchen (COMTEK), a program based out of the South Side Initiative Center that helps people start their own food based business.

COMTEK helps set up business counseling and training sessions for its clients and walks them through the steps of setting up their own company. It is a joint venture between Syracuse University’s Whitman School of Management and Morrisville State College’s Nelson Farms food processing center.

The Test Kitchen has been going since March 2008, and is one of the major areas of the SSIC’s attempts to help rejuvenate the South Side community’s economy and get businesses up and running.

The program is perfect for people who love cooking, but had never really thought about making money off of their creations. People just like Herrin, who had never thought about starting a small business until she read about COMTEK’s opening.

“The majority of these people are foodies — or food lovers — and we help them set up a legal product,” Foster said.

COMTEK has educated Herrin as to what she needs to do to get her company, Herrin Gourmet going, she said. They have also provided her a place to have her food produced, as like most of people, her home kitchen is not a state approved facility. But that is not an obstacle, as she is able to have her sauce produced at Nelson Farms.

It is still early to say, but so far results have been good. The sauce is also being sold in six different stores and recently she had to schedule a third production, this one a double batch. “My first production was Aug. 6. It’s been a real hit. I almost sold out at the state fair,” Herrin said.

While COMTEK is based out of the SSIC building, it seeks to help anyone in the Central New York area. “We really don’t want to turn anyone away,” Foster said.

Though Foster is glad that the program is open to the entire region, she also wishes that more people from the South Side would take advantage of it. “Some have, but not as much as we’d like,” she said when asked about South Side participation.

There will be plenty of time for that though, as the program is open ended. COMTEK’s work is dependant on grant money, but there is support from other sources as well. “The chancellor (SU’s Nancy Cantor) and the university want to support this,” Foster said.

As for Herrin, she doesn’t see herself stopping anytime soon. She has plans for a new sauce and hopes to one day have a whole line of food products.

“I have drive.” Herrin said. “When I start something, I want to finish it.”