Construction to begin for South Side Food Cooperative

A blue tarp kept the mud at bay during the groundbreaking ceremony for the South Side’s  Eat to Live Food Cooperative Friday morning, as organizers and local officials voiced their support for the project. Linda Littlejohn of Syracuse University’s South Side Initiative said the day reminded her of the lyrics to a Sam Cooke song:

“It’s been a long time coming, but I know a change is gonna come,” she announced with a smile. 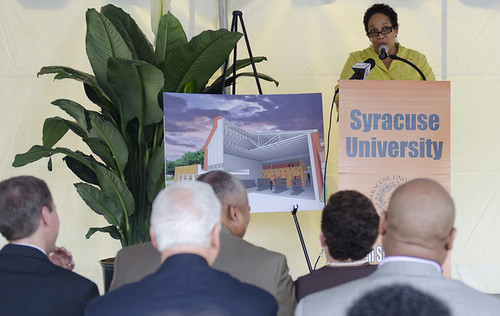 Linda Littlejohn, associate vice president of Syracuse University's South Side Initiative, speaks at the ground breaking for the South Side Food Cooperative. -- Photo by Amanda Marzullo

The Cooperative, affectionately known as The Co-op, has been in the works since 2006. It is intended to address the lack of accessible grocery stores on the South Side by creating an affordable source of fresh fruit, vegetables and other staples.

Speaking to the crowd at the groundbreaking event, Mayor Stephanie Miner said that pro-bono work by volunteers has saved the project hundreds of thousands of dollars.

“Without the volunteers, this would not happen,” she repeated.

In addition to a number of community members, many SU professors and students have been involved in the planning and design. Sekou Cooke, an associate professor of architecture, created the design and incorporated ‘green’ elements to improve the building’s efficiency. These include a roof designed for solar panels, a water reclamation system in the basement, and pourous pavement to allow rainwater to seep into the ground instead of runoff into storm drains. Cooke says that working on the project made him feel that it was important.

“It opened my eyes up to a lot of the realities that were happening here on the South Side. It makes me feel like I need to be involved in more projects here,” Cooke said.

The new $3,000 building will occupy the vacant lot at 2327 S. Salina St. Organizers expect construction to begin this month so the Co-op can open for business by January of 2013.

Community members will have the opportunity to buy shares in the cooperative for $100 and receive a percentage of profits at the end of the year. Amatullah Yamini, a longtime South Side resident and owner of Salina Shoes, says she has already purchased a share.

“I was shopping here when they were on the corner,” she said, remembering how volunteers began testing the viability of the project by setting up a fruit and vegetable stand throughout the year.

Looking out at  Salina Street, Co-op board member Howie Hawkins pointed out where grocery stores used to stand on the South Side.

“Up here on the corner of Brighton there was a grocery,” he said. “The last one left in 2009. That’s why they call it a food desert.”

He says that the co-op model, where members have the opportunity to purchase shares and have a stake in the profits, is significant.

“It means we own it. The community owns it. It can’t decide, like P&C did, to just shut down.”

The Eat to Live Food Cooperative is a project of the South Side Initiative and the Southside Community Coalition. The South Side Stand is a similar project. Funding for the Co-op has included grants from the CNY Regional Economic Development Council, Syracuse University and local non-profit foundations. 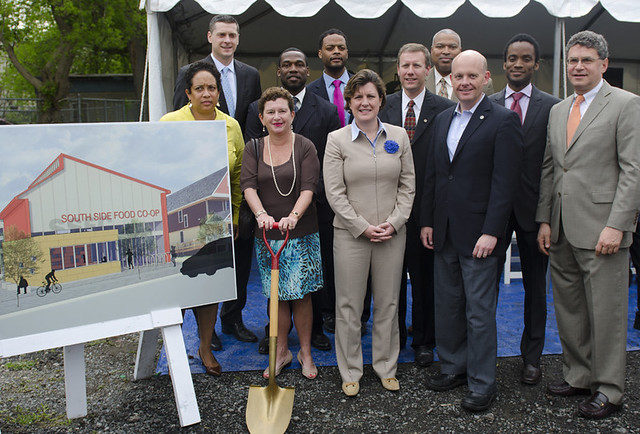