Cool Off With a Visit to The Valley for Ice Cream

When driving out of the parking lot of Arctic Island Ice Cream on West Seneca Turnpike, turn right. Drive straight for less than a minute. Turn right onto Valley Drive and enter the Gannon’s Isle parking lot.

Not only are these two family-owned ice cream places less than a two-minute drive from each other, but they also bring non-Valley residents to the Valley.

“Their reputation is pretty well known in Syracuse,” said Lisa Parsons, of Cicero, about Arctic Island. Then she added, “But Gannon’s has a good reputation, too.” 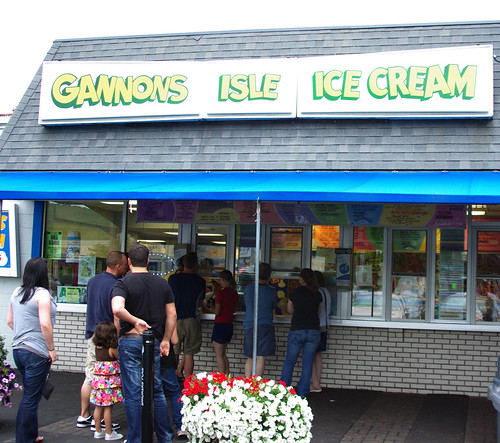 Gannon’s and Arctic Island serve homemade ice cream to residents of the Valley and the South Side. Being within walking distance of each other, the shops provide a forum for friendly competition, their owners say. Overall, customers say they remain loyal to one ice cream shop and don’t double dip into the competitor.

“He has his customers, and we have ours,” said Eileen Gannon, part owner of Gannon’s, about Dan Sorber’s Arctic Island.

Now a 5,000-square-foot building, Gannon’s used to measure a mere 500 square feet. The smaller building was the original location of Arctic Island before it moved down the road to its current spot on West Seneca. Once Arctic Island moved, Eileen Gannon and her brother John started their own ice cream shop with the help of their father, who already owned a grocery store and café in the complex. Sorber has been the owner of Arctic Island for about five years, while Gannon’s has been in operation for about 28 years.

“We like that Gannon’s is there because they keep us on our toes,” Sorber said. “They run such a great business that we need to make sure that we do the same thing.”

The two stores have built a name for themselves. They attract students and families from the area, and they both serve as a meeting spot for friends and family to get together on a hot day. 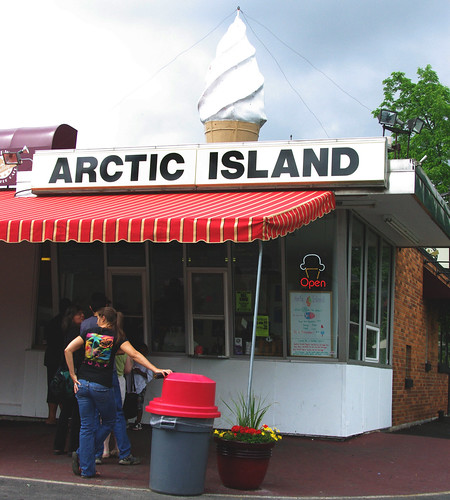 Jennifer Daly, from the Valley meets her friends Nicole Dragoon and Steve Stewart, from Dewitt, at Arctic Island about once a week.

“I have been coming here for approximately 20 years, since I was a kid, and now I bring my son,” said Daly, whose favorite flavor is a mix of black raspberry and orange sherbet. “It’s cheap, close to home and when we come here I usually take my son to the playground next door.”

“It’s generational,” said Nicole Dragoon of Dewitt whose favorite flavor is a classic vanilla soft serve with rainbow sprinkles. Dragoon and Stewart drive 20 minutes to meet with Daly and get ice cream. They have been meeting here for the past two years.

Daly has gone to Gannon’s in the past but she prefers the location of Arctic Island. “It’s outdoors. Plus the cafe next door has phenomenal sandwiches,” Daly added.

“I got her hooked, said Daly of Dragoon. Dragoon in turn is the reason why Steve Stewart goes to Arctic Island. Stewart, who is originally from Vermont, prefers the Black Raspberry soft serve. “It’s the best soft serve around,” said Stewart.

Cecil Green, 62, also likes the location. He has been coming to Arctic Island for approximately five years, usually on Sunday afternoons.

“I like that I can sit and think and enjoy the view,” Green said. His favorite flavor is the low fat, soft serve orange sherbet. Green said he doesn’t care much for movies or the mall for his Sunday outings, “I just like the quiet and solitude.”

Lisa Clary, 23, from Marcellus, met her friends Jenny Pollartro and Stephen Sonnleitner at Gannon’s because it is the halfway point for them to meet. Clary and Pollartro, who is from Manlius, said they had never been to Arctic Island.

“This is good so why change a good thing,” Pollartro said, while eating her butter pecan ice cream.

Also, Barbara Newmiller and Carol Bricer have been coming to Gannons for a long time — every other week in the summer. 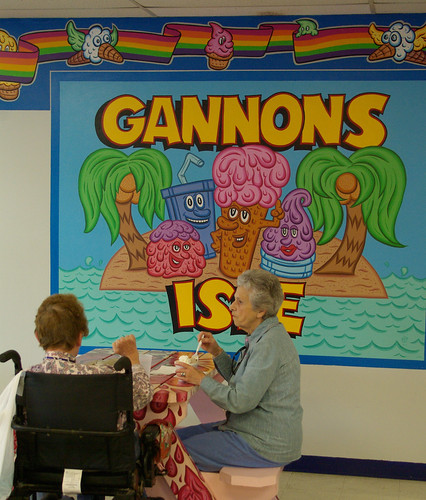 “It’s a good place to stay away from if you don’t want to gain weight,” joked Newmiller, who walks to Gannons in order to get some exercise. “It’s a nice place to walk to from our house — convenient — when the weather is nice.”

Sam Moses, 20 and Gordon Jones, 42, both from the Valley, have come here about once a week for the past five years.

“It’s our Sunday pit stop,” Gordon said. They both like the sherbet and said they enjoy the outdoor seating and nice people. “It’s closer, cheaper and tastes better.”

Gannon’s and Arctic Island are designed differently. Gannon’s, whose walls are decorated with colorful ice cream cones and fruits, offers inside seating. Arctic Island is mainly a walk-up window with the café next to it.

“I think our look is different, our marketing scheme,” Sorber said. “They (Gannon’s) have really fun and bright colors.”

Sorber said plans are being made to renovate part of the ice cream shop to give the building a little face lift.

“We’re putting on an awning out front,” Sorber said. “We are trying to extend the space for the summer and paint a little on the side.”

Regardless of how the stores look on the outside or how they are decorated on the inside, the owners’ ultimate goal is the same: to keep updating their menus with new flavors and to satisfy their customers.

“Something we appreciate about being in the business is we get to know all these interesting people,” Sorber said.

Gannon described the current challenge: “Our biggest thing now is to hunt for specialty flavors.”