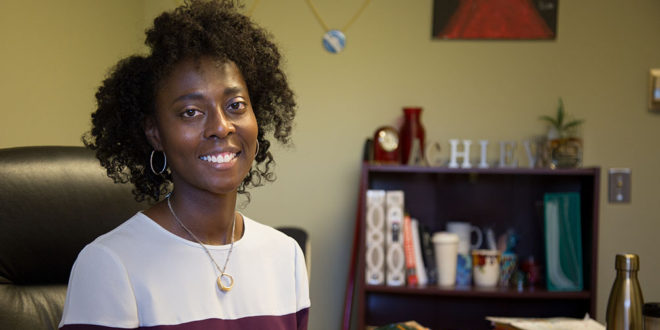 Greater Syracuse H.O.P.E. is an anti-poverty initiative standing for Healing Opportunity Prosperity Empowerment. Syracuse is one of 16 cities chosen to participate in the Empire State Poverty Reduction Initiative or ESPRI. H.O.P.E. originally was created to model the Rochester Anti-Poverty Task Force to bring the community together to fight poverty.

The executive director here is Ocesa Keaton, a native of Syracuse. The Stand sat down for a chat and added some additional questions through email to discuss H.O.P.E. and what’s next. *Indicates questions answered via email.

It was a response to a report done on poverty called “Architecture of Segregation,” by Dr. Paul Jargowsky. He determined that the city of Syracuse has the highest concentration of poverty for blacks and Latinos in the country. So, the community started gravitating around the issues of economic disparities. From those community conversations, my co-chairs Sharon Owens and Helen Hudson went to Albany for something referred to as Policy Day. They, along with other key leaders from other Upstate cities, started to speak out about the disparities that were really driving the poverty numbers up in their area. That’s why the governor created ESPRI, which in turned funded the movement that started H.O.P.E.

TS: How did you get involved?
Keaton: I was hired to help streamline the process and implement the strategies that the community helped the team come up with to address issues of economic disparity and unequal access. I guess the short version of it is that I have always been very involved in my community, so learning that H.O.P.E. was having its different listening sessions and having different meetings, I (got interested). … But I had to go through the application process like everyone else, interview and then was chosen.

One agency might not know what another agency is doing; sometimes there is a duplication of services, and that goes back to systems work. It’s causing a gap in the greater economic system. So how do you fill that gap and become a broker of information so that one agency and another join forces for more effective services for the greater community? That’s what we mean by partners, not necessarily in the traditional sense in that we would share clients. That type of information is a two-way street, and not only are we getting information from the community but (learning) how they are impacted.

We are also talking to policymakers in New York state and at the county level to give them the viewpoint of the citizens. This is how the policy reads out on paper, but how does it translate in real life? (Here are) the unintended consequences (of) this policy. 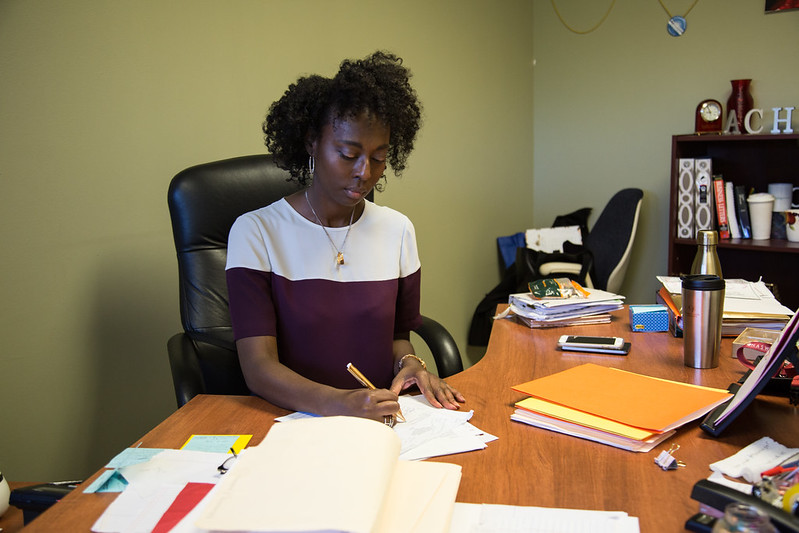 TS: Can you describe this type of collaboration between organizations?
Keaton: For example, let’s say that you have an individual named John, and he lives on the South Side of Syracuse. John has a high school diploma, but he may have low literacy skills. He is seeking work, but John does not have a car. John goes to a job fair at one of the community centers, and he gets hired by a manufacturing company that is in DeWitt. John can’t get to DeWitt. So, John tries to get to DeWitt the best way he can by bumming rides with friends or getting the bus and walking, but that causes him to constantly be late. The employer does not recognize that John must catch three different buses or that the bus only goes to a certain point and he must walk more than three miles.

What H.O.P.E. does is bring the employer of that DeWitt manufacturing company, the president of our transportation service and John to the same table so that everybody can have a conversation, (learning) each other’s point of view … identify the roadblocks and obstacles that make it difficult for John to get to work constantly on time.

TS: What kind of policies does H.O.P.E fight for?
Keaton: H.O.P.E. fights poverty on three fronts: policy, perception and people. We bring to light policies that negatively impact persons in poverty, and we fight to change the perception of people in poverty as a narrative. When people talk about poverty, they look at it as it’s the person’s fault — they’re blaming the victim. However, it’s more than that and it’s more than telling somebody to pull themselves up by their bootstraps. It’s OK if you want this person to do things on their own (but) then you need to allow them the room to do so because they won’t be able to get as far as they should if at every turn you are cutting their assistance. The truth of the matter is that we all get assistance in some way. Some people are more fortunate that their family can provide them assistance, and some people’s families don’t have access to be able to provide that assistance.

TS: How does H.O.P.E. view poverty?
Keaton: One of things about poverty is it is not just in one segment. It’s the worst-kept secret that it is not just Syracuse that is experiencing poverty, it is the county as a whole. Mattydale, Solvay, Camillus … they’re experiencing high rates of poverty as well. However, it is not spotlighted in the same way because their poverty is more spread out. So when Syracuse is identified with a high concentration rate of poverty among blacks and Latinos, that means Syracuse is a highly segregated city, and we push people that look the same all into one area and somehow we keep them there.

We are not the only community that does that. This is where ESPRI comes in because it happens across the state. There are 16 ESPRI cites, including Syracuse, and they are all along the interstate; some of the cities are Rochester, Buffalo, Oswego, Utica, the Bronx, Newburgh. Those are just a few of the cities but one of the things that we all have in common is high concentrations of poverty, and that is when people interweave the I-81 debate into the situation. How much did the construction of the highway contribute to the segregated housing, which has now created the high concentration rate of poverty?

*TS: How damaging is it emotionally and socially to be defined by your income as “poor” when there is so much else that defines a person? Did you experience this growing up in your own home or neighborhood, or see it affect others?
Keaton: The damage associated with defining a person as poor is that this definition becomes THE definition attached to an individual. It also allows the broader community to feel a sense of separation from the topic of poverty, and the syndrome of “otherness” comes into play. Meaning “we” know how to work hard and pull ourselves up, but those “other” people over there are lazy, uneducated and deserving of all the horrible things that happened to them. The effect that I see is not isolated to a person or a neighborhood but a city. A city that once was a leader in innovation and fostering community relationships, a city where people had a chance for economic mobility, but now I see a city that has forgotten all the things that make us great and instead allowed a word to become our sole focus.

It is time to stop talking about poverty and the stats and instead recognize the strengths and natural resources that we have. Poverty is not a good thing: period the end! However, we are good people in this city of Syracuse that can overcome this issue.

The Stand: What is the latest with H.O.P.E.?
Keaton: We just finished a request for community partners. We’re hoping to gain from that request innovative ideas and approaches related to our four focus areas of housing, health, economic opportunity and education.

We got a very positive response from the community. In December, we had a proposal meeting and around 90 different community organizations and not-for-profits came and wanted to be a partner in H.O.P.E. We have seen over 30 applications, and we’re still going through the fine-tuning details in who we might partner with and what our partnership will look like. Our focus would be in trying to facilitate collaboration in the areas where it makes sense for organizations to collaborate. And particularly with organizations that either a) may not be fully aware of each other and what they do and b) maybe never really thought that a collaboration was possible between them.

*TS: What are the key dates to come in 2018 for H.O.P.E.?
Keaton: Some milestones are the selection of our community partners, as well as community advisory board members.

*TS: When will the community advisory board be announced? What’s the process leading up to that?
Keaton: This group will be assembled over the course of the next several months. The process includes selecting members of the community who express a sincere interest in providing input on strategies that will impact the community of Syracuse. 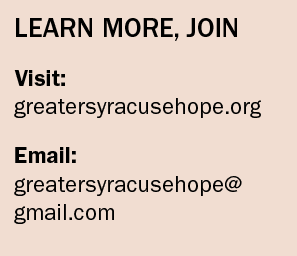 *TS: What are key priorities from now until May? Then, over summer?
Keaton: The immediate priority at this point is submitting our proposed plan to the state of New York for approval. Implementation will occur once the plan is approved.

TS: What can people do right now?
Keaton: I would encourage anyone that is interested to contact me. We are looking for community members that want to change the narrative about poverty. We are accepting youth between the ages of 12 and 19 with a designated number of spots set for them. They have the highest stake in the community of anybody because they are going to experience the growth or the lack of growth more than anybody in any other age group. We need to know that you have a commitment to the process, and we are accepting those applications until we fill all designated seats. The advisory board and I want to cap it at 13, but there will be other opportunities to volunteer.