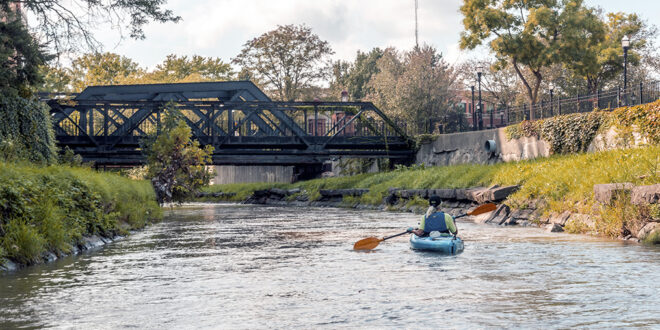 Creek Rats commemorated its 20th anniversary Saturday with a gathering of canoers and kayakers floating down Onondaga Creek for a final fall paddle.

“It was great,” said Bob Graham, co-founder of the Creek Rats. “There were a lot of new people, and it was a nice day.”

“It was a good sign that everyone stuck it out and didn’t quit,” Graham said.

Creek Rats is an organization that holds annual cleanups of Onondaga Creek, as well as recreational floats a few times a year. It is the creation of Graham and co-founder Steve Seleway. The pair met in 2001 while volunteering at an Onondaga Creek cleanup.

“There was a call in the community paper for the cleanup,” Seleway said. “People came in canoes and kayaks to help out.”

Cornell Cooperative Extension sponsored that initial creek cleanup with the help of grant money. After the grants stopped, Creek Rats took over, raising funds itself.

During the cleanup 20 years ago, there were assorted items strewn across the creek such as bikes, shopping carts and auto parts.

“It was a mess,” Seleway said. “You couldn’t go far without bumping into something.”

Most of the junk has been removed over the years, although a couple ATMs and a safe have remained.

Restoration efforts by the group turned Ollie’s Point into a revegetation area. A plaque was installed in 2020 in dedication to the volunteers. Efforts have included weeding – by hand – to rid the area of Japanese Knotweed and replanting it with shrub willow plants surrounded by grasses.

Creek Rats also has partnered with groups such as the Syracuse Public Arts Task Force and Creek Float. Past collaborative events held include a floating art parade and even a pirate-themed float.

Susan Baiter, of Syracuse, participated in her first Creek Rats float alongside her boyfriend Ivan. The couple recently moved to the city and bought an inflatable kayak to practice with.

“This was cool,” Baiter said. “You get to see a part of the city no one else gets to see. I would do it again.”

The float attracted people from near and far away. Sisters Jennifer Townsend and Diana Lucas are originally from Syracuse, but currently reside in Madison, Wis.

“We grew up in the Valley and went to Corcoran High School,” Lucas said. “Our aunt and uncle were part of a canoe club in Camillus.”

The sisters are massive canoers, but there was a time when they weren’t always in the water. As kids, they were warned to stay away from the creek. They found ways to sneak there, however.

“We would climb the fence, but eventually someone would snitch,” Lucas recalled. “So, it was important for us to come back and be in this creek. It was like fulfilling a childhood fantasy.”

“I felt joy,” Townsend added. “I romanticize the creek, as a big history buff.”

Everyone had different motivations for participating.

“I love to try new things, and I love the water,” said Suzanne Lindsay, of Syracuse. “I couldn’t even tell I was in the city during the trip.”

For Graham, Creek Rats is about more than just cleaning up the area. It is also about cleaning up perceptions about the South Side.

“The city’s full of potential,” he said “A lot of people don’t think of the South Side, but there are great unwritten stories there.”

Graham cited the work of other locals who put together projects such as community gardens, home-building and farms. “If you stay patient and persistent, you’d be surprised at what you can get done.”