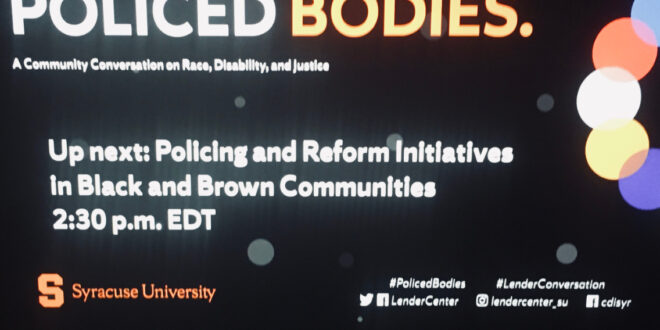 The Lender Center for Social Justice launched a two-day conversation on issues of race, disability and justice centering around the issues of policing. During one session titled “Policed Bodies: A Community Conversation on Race, Disability and Justice” local advocates discussed the current relationship between Blacks and police in America.

Yusuf Abdul-Qadir, lead organizer for the Syracuse Police Accountability and Reform Coalition and a product policy manager at Facebook, served as the moderator, delivering questions to participants Brandon Anderson, Talina Jones and Ashley Gantt on their personal experiences with police officers.

As a gay man and a former military member, Anderson says he lost his significant other in 2007 due to a gunshot wound during a routine police traffic stop. He added that the officer involved had a checkered history of being violent while on the force.

“Many people in my community did not report him primarily because it’s a joke to report police to the police,” Anderson said.

Anderson further recollected that such is a common case when it comes to people coming in contact with police violence as civilians.

In memory of his lost partner, Anderson founded Raheem, an independent service designed to report police violence within the United States. Services offered include connecting people abused by police to a free lawyer, helping individuals file a complaint or uniting them with a local advocacy organization. Anderson says reports to Raheem are being used in more than 200 cities to document police behavior.

The meeting also touched on the issue of defunding the police, an issue of top importance to Ashley Gantt. Gantt is a co-founder of Rochester’s Free The People Roc, a grassroots organization focused on defunding the police and abolishing the prison industrial complex. Gantt says the 2020 death of Daniel Prude in Rochester was the incident that ignited the spark in her hometown. Prude lost his life to police despite having a mental crisis during the altercation.

The session also addressed police interactions with Black people who identify as disabled. Talina Jones, chair of the New York State Early Intervention Coordinating Council, works an advocate for families who have children with disabilities and is mother to a teenage son with down syndrome who struggled with communicating. Because of her personal as well as past experience as a language trainer of speech for the Early Intervention Partners Training Project, Jones understands the importance of people with disabilities not being able to say the requisite information necessary when coming in contact with police.

“It was so incumbent upon my therapist to know that I wasn’t asking speech therapy for the sake of speech therapy,” Jones said. “I was already thinking about his life as a black man going into this world.”

Jones spoke of the vitalness of her kid being able to speak, and that although he’s come a long way and can communicate, not everyone is as lucky as she is. Therefore, dire consequences could possibly commence if the wrong police/civilian interaction occurs.

“All I can think about is someone asking him for his identification,” Jones said. “Or asking him to stop. Everybody was like, ‘Hands up, don’t shoot,’ and I kept saying my son can’t say that. He actually might be physical with you if you decide to put your hands on him because he’s scared.”

In a thought-provoking Zoom conversation, all parties acknowledged the flawlessness of the police system and embraced the chilling reality of not seeing justice between the police and the people their sworn to protect, but instead the stilling effect of death and its dehumanizing aftermath.