When you walk through the doors of a small side room of the Villa Scalabrini Apartment complex, you’re welcomed with a double surprise: a table filled with colorful fruits and vegetables and a warm and welcoming smile.

Virginia Diane Turner holds her arms open wide to greet with a hug, not a handshake.

“Hey honey, what would you like?” Turner asks an elderly woman as she enters the corridor with her walker. 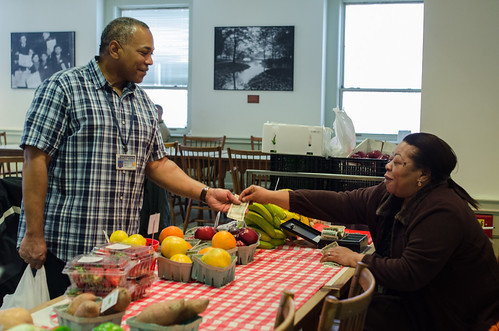 “We get regulars all the time,” Turner tells a visitor. “They love that we make it easier for them to access their fresh fruits and vegetables.

“What I’m doing, I do it from my heart. I don’t do it for a reward. I know my reward is up there,” Turner said as she pointed toward the sky.

Through a window in the room, you can see a large yellow truck outside with the words “Farm Fresh Mobile Market” written on the side. Turner is the face behind the wheel, and out front is a project that has been successful for five years and counting.

Turner’s son, Anthony, was in junior high school when his mother started the market. “When my mom first started the mobile market, I didn’t quite understand it because I was younger, you know? But I always knew she liked to help out the community, and I know she’s doing for others,” Anthony said. “I’m very proud of her. She’s amazing, just amazing.”

Turner describes how the mobile market began. “We got the truck in 2008, (and) we began to do all the necessary paperwork that we had to do, and then we started,” Turner said. “We started enabling. You see most of the people that come in here now are either in wheelchairs or use walkers, so they aren’t always able to go to the grocery store. So by bringing the market to the people, that really helps them to come and shop and give them the opportunity to shop.”

“These are some big oranges!” one customer exclaimed last spring as she took a look at one of Turner’s spreads.

“Yes they are!” Turner said. “You will see things in the grocery store that (are) smaller that you pay more for. Donations that we receive help to keep the prices of the produce low. So you can do something a little better than what the grocery store is doing.”

Two oranges, two bananas, zucchini, and one plum comes to a total of $4.10, which Turner says can be almost double that in a bigger grocery. Turner says she has bought produce from over 40 states; in the summer, most of it comes from local farmers.

The Farm Fresh Mobile Market was designed to provide high-quality produce at reasonable prices, to shoppers who can’t get out, or go far. It was originally funded through a partnership including the Gifford Foundation, Onondaga County and the New York State Department of Agriculture & Markets, and now is managed by the Southside Interfaith Community Development Corporation and sustained by donations and grants.

The Villa Scalabrini Apartments is one of more than 10 locations where the market stops, including the Syracuse Community Health Center on the South Side. Southside Interfaith CDC was founded in 1995, when it first began operating a food pantry out of the South Presbyterian Church in Syracuse. Turner is the president of the organization. 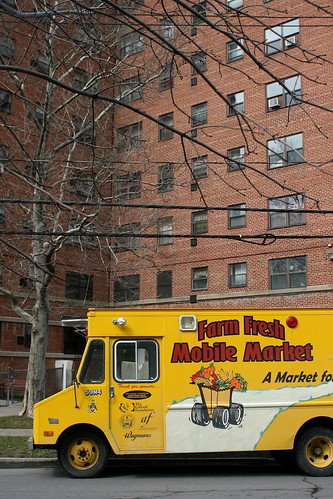 The Farm Fresh Mobile Market counteracts the inaccessibility of fresh fruits and vegetables for Syracuse city residents by bringing high-quality produce to their communities.

“One of my favorite moments is when a senior says ‘Thank you for coming.’ That is one of the best highlights they could ever give me,” Turner said.

A few years ago, funding for the mobile market was in jeopardy. Turner got together with a few of her board members of the Southside Interfaith and changed their minds. That day, they went out into the community where they met with seniors. The seniors were asked, “What would happen tomorrow if the market quit running for you?”

Turner thinks back to some of their responses: “‘I wouldn’t know what to do. I mean look at me, I can’t go to the grocery store.’ I was very interested to know that this thing must be very important to them. It’s the people that really enjoy the market that keeps you moving.”

And move she does. Turner sets out every day of the week, either working from her office at Southside Interfaith or driving the mobile truck herself to the various locations.

Since her trek from North Carolina to Syracuse more than 30 years ago, Turner has worked numerous jobs in transportation, factory work, back to transportation and countless volunteering positions.

“She’s compassionate,” said Stacey Holmes, who’s been a friend for more than 20 years. “She’s just there for people. No matter what you’re going through. She’s a good friend. You don’t have to call for her, she’ll already be waiting for you.”

Sheena Solomon, of the Gifford Foundation, has known Turner going on seven years now. “She is one of the hardest-working women I’ve met, but she always has a smile on her face,” Solomon said. “She makes things fun and has such a good sense of humor.” Every time they get together, she says they share a good conversation and good laugh. 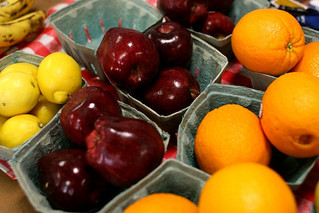 Fresh lemons, apples and oranges are recent offerings made possible by the Farm Fresh Mobile Market.

Asked what she does in her time off, Turner turns that into a good laugh, too. “What time off ? The day is a day of laughter. No matter what’s going on. You’ve got to laugh and you gotta stay focused and laugh about it. Because if you carry it home, you’ll be divorced.”

Willie Ballard is one of about 10 volunteers with the mobile market. “She is a very nice lady,” Ballard said. “She’s very independent and knows what she’s doing and where she’s going. She’s just a very good person to work for and I enjoy working with her on a daily basis.”

Anthony, now completing his master’s degree at University of Arkansas, describes his relationship with his mother. “It was fun growing up with my mom. She was always there to guide me in the right direction when I otherwise could have made negative decisions. But she was always there, and supportive. She never restricted me. I told her, ‘Mom, I want to play football,’ and she’s supported me ever since. Now I’m playing football for University of Arkansas.”

Audrey Haskell, vice president of Southside Interfaith, says Turner is “enthusiastic” about everything. “No matter what she does she’s excited about it, she makes it interesting, you know? She doesn’t do something just for the heck of doing it, she does it because she’s really, really excited about it,” Haskell said.

Although Turner doesn’t get paid, she hopes to continue for many years to come.

“It would be a sad day if I didn’t have the market,” Turner said. “I grew up on a farm in the South, so I grew up around people helping people.”