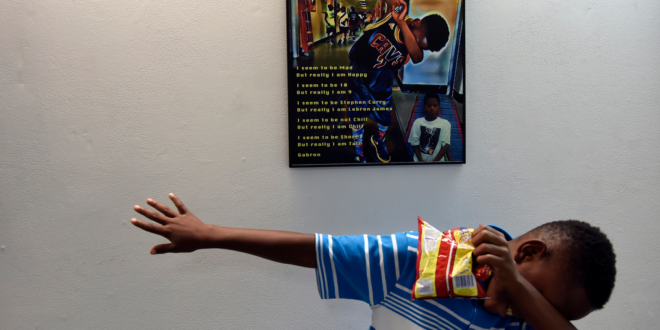 The Link Gallery at Syracuse University’s Warehouse recently displayed the artistic work and creativity of 14 young people who had been enrolled in a summer program at the Southwest Community Center. Equipped with cameras, armed with Photoshop techniques and determined to write about their experiences, the adolescents had worked with Syracuse University faculty to create their art.

“This program teaches them to be creative at a young age,” said Halston Canty, who works with young people at the center. The work, he added, also helps them “just tap into skills they might not have believed that they had, which is very important. If they can sit here and put this stuff together, they can think about the life skills they are going to need: ‘I can start driving,’ ‘I can read this book,’ ‘I can go to college,’ ‘I can do anything.’” 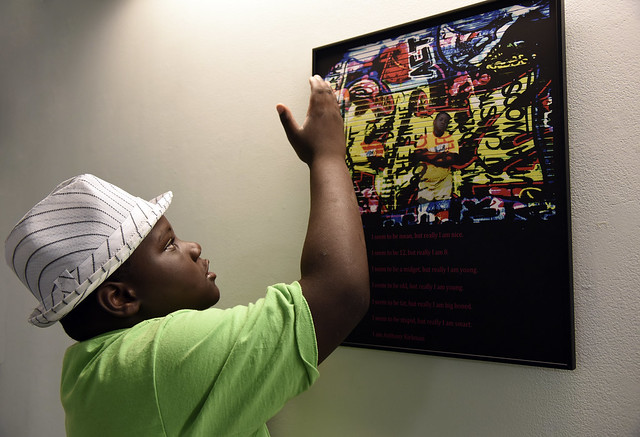 Anthony Kirkman describes his piece, inspired by an exercise: “I seem to be, but I really am …”

Work shown at the gallery event in September included self-portraits, poems and graffiti images. Eight-year-old Anthony Kirkman created a piece so vivid that the gallery used it as advertising for the event. Anthony said he had to stop and do a double take when he picked up the flier for the first time.

This summer’s Journey to Manhood Program at the Southwest Community Center ended with the art exhibi- tion “Just Never Give Up” at The Link Gallery and centered on young men from an economically disadvantaged community.

In an exercise — “I seem to be, but I really am” — students picked generalizations or stereotypes people have associated with them. Then, on the final line, they said who they really are, who they see themselves to be and what their interests are in life.

“I duplicated myself three times, plus my writing,” Anthony said. “It’s about what I seem to be and what I really am. I seem to be mean but really I am nice.” Anthony’s second piece makes a call to his community: “Love me and stop the violence.”

Phil Haddix, co-facilitator of the Photo and Literacy (PAL) Project summer session, talked about the variety of communication options the students can use to express themselves: “The recipe is looking at different ways to engage students to increase literacy,” Haddix said.

Canty, who is also the youth specialist for the Journey to Manhood Program, stressed that the program aims to shape the boys into positive pillars in their communities.

“We work with them, help them with development skills, coping skills,” Canty said. “Allowing them to step outside of their neighborhood, step outside of the box a little bit, see things that are different besides just wanting to be a basketball or football player.”

Nonetheless, the common thread of sports icons seemed to stream through the artwork as inspiration. Juelz Jackson, 11, talked about how his art was influenced by his role model, NBA player Stephen Curry of the Golden State Warriors. “I like Steph Curry,” Juelz said. “I think he’d like my art.”

Stephen Mahan, director of photography and literacy projects, taught the program’s class at The Warehouse over the summer. It is similar to classes he teaches at SU. Students of his, many of whom are enrolled in the College of Visual and Performing Arts, work with the school-age youth to enhance their media skills. 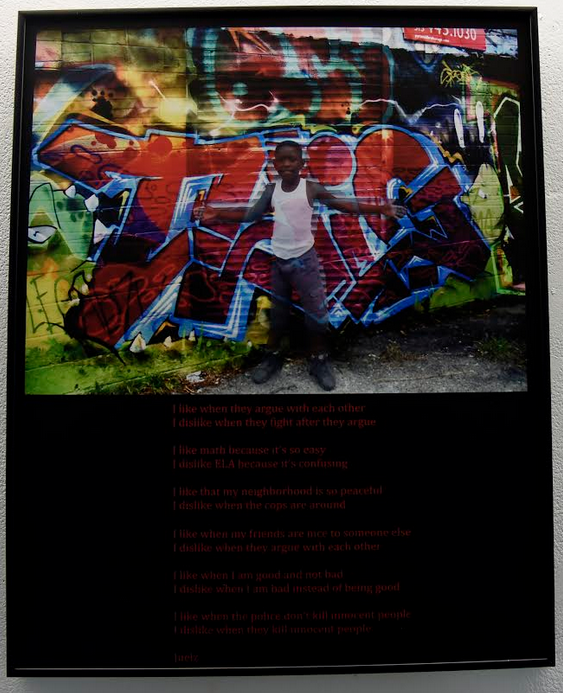 “The idea being if you can take a picture of it, then it’s easier to write about it,” Mahan said. “It’s a whole other story-telling device rather than words.”

Mahan found it an easy task to get the kids engaged in the new forms of digital expression. “They’re so digital savvy, the kids,” he said. “You show them once and ten minutes later, they’re showing you a better way to do it.”

Canty agreed: “It’s a little bit of a challenge,” he said. “But if you … speak to them positively, you give them the right advice, and you show them how they can be a leader, how this can change your life, change your neighborhood … sky’s the limit.”

Although the summer class has ended, Mahan continues to work with youth from the community during the academic year, with participation from students in his Literacy, Community and Media classes.

Haddix said there’s no better environment to spark the creative talents of the youth. “A lot of African-Americans who do not see SU as an accessible building for them, we’re bringing them dead center,” he said.