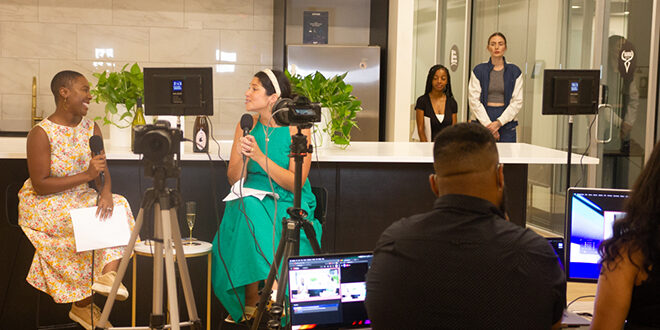 Ecodessa, created to bring sustainable fashion brands from around the world to downtown Syracuse, holds a monthly Sip and Shop event as an opportunity for shoppers to have a cocktail and see its latest collections.

For its anniversary, Ecodessa added a twist: Filming a live pilot episode showcasing their new fall collection with a fashion show on its new YouTube TV series, Ecodessa TV.

The channel will continue the Sip and Shop event in addition to a fashion show featuring seasonal collections. Episodes will launch quarterly and feature informational content such as video tours of production facilities, introductions to garment workers and vegan fashion brands.

Caeresa Richardson, the owner of Ecodessa, said celebrating the shops’ one year anniversary with a live, virtual fashion show on Ecodessa TV brought a mixture of emotions.

“I’m so grateful, excited and happy with myself and my team. We did it. We hit this one-year milestone,” Richardson said. “But now I also feel pressure, like I have to keep up the momentum.”

Starting as a popup shop in October 2019, Richardson later opened a brick and mortar on South Salina Street during the pandemic in August 2020.

Due to being a new business, Ecodessa did not qualify for the first round of Paycheck Protection Program loans and other small business Rapid Relief Funds. So, Richardson grew her business during the COVID-19 pandemic through the Sip and Shop programs.

She first started by selling inventory curated during the pandemic. Richardson live-streamed using Facebook and Instagram to feature the store’s new collections.

“I had to figure out an innovative way to let people know that I have all of this beautiful clothing in my living room,” Richardson said. “It really grew from that in terms of expanding my customer base in Syracuse, as well as non-local.”

According to Me’Shae Rolling, executive director for Upstate Minority Economic Alliance, Richardson’s business is one of approximately eight Black-owned businesses in downtown Syracuse and is currently the only Black-owned retail shop downtown.

Although Rolling said she is amazed by the hundreds of minority businesses that exist in Syracuse — operating out of pop-up catering spots, home offices and online — the access to capital limits Black-owned storefronts.

“I know many entrepreneurs who are excellent caterers, but don’t have the resources to open a restaurant. Why? Because access to debt-free grants or low-interest capital remains a barrier for minority entrepreneurs,” Rolling said. “Minority business owners —barber and beauty shops, for example — would love to own the very structures they operate out of, but leasing is a lucrative proposition for many owners.”

For this reason, Richardson said locating her storefront on South Salina Street was intentional.

“The visual of just having a high-end retail store in downtown Syracuse, owned by a Black woman is very important,” Richardson said.

Prior to opening Ecodessa, Richardson was a mechanical engineer for 15 years. She said she has always felt pressure as a black woman to make an impact in corporate America and now as a business owner.

“There’s a pressure to be that example for others like me but then there’s also the financial pressure of actually being a viable business,” Richardson said.

Richardson says another key for her is to be purposeful when collaborating. During the Sip and Shop, she partnered with DJ Bella J for the fashion show’s music and Officially Unofficial, a web show series led and produced by Ana Gil, for streaming purposes. The event also allowed for other businesses, owned and operated by women and Black entrepreneurs from Syracuse to network with one another.

Donnie Monk, 23, Syracuse resident, served as one of the models in the Sip and Shop show. She co-owns Ecothot, an up-cycling Black-owned business used to recreate vintage clothing, organize community clean-ups and educate on sustainability.

“This is a great way to network with business leaders and entrepreneurs, especially with having a business that’s science focused,” Monk said.

She felt empowered by “allowing other people to see my life from a different perspective,” and being able to learn more about running a sustainable business from Richardson through Ecodessa.

“It’s good to work with someone with similar goals, Monk said, “because it allows me to grow and get mentorship from someone with more experience.”

Those interested in the new YouTube series can find more information at Ecodessa TV.  The next Sip and Shop fashion show will feature a winter collection.

As for the future of Ecodessa, Richardson hopes to one day own property in a metro area, such as Syracuse, and to build a community space with the focus of empowering women to support brands that align with their values.

“The way that Ecodessa TV supports and elevates that is ensuring that we stay relevant, connected and informative to women who are patrons in our beautiful boutique,” Richardson said.