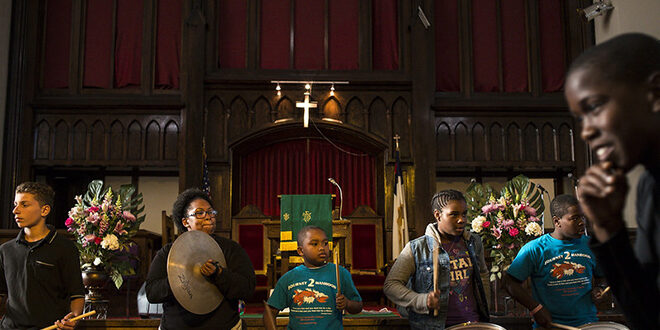 Youth in the Elks Marching Band perform during the 2014 Back to School Gospel Jam at The People's A.M.E. Zion Church. | File Photo

After more than two years of uncertainty due to the pandemic, the Syracuse Elks Lodge #1104 is now set to re-open and seeks youth to refill the ranks of its award-winning marching unit.

As part of an international organization that contributes to its community, Elks Lodge #1104 provides educational programs to local youth, like the marching band, tutoring and also oratorical, beauty and talents contests.

“We have four principles: charity, justice, brotherly love and identity,” Elks Brother Wilton George said. “Obviously, during the pandemic, all of that was shut down.”

The marching unit performs in parades and events throughout the Greater Syracuse area. In recent years, the support surrounding the program has decreased both locally and statewide.

“Back in the day, (the marching unit) was a much bigger thing,” George said. “They went around the country, performing in parades and competitions. The parents that brought their kids were people who actually performed when they were kids. Nowadays, since there was a break in the continuity of it, we don’t really have that. Now, we have grandparents bringing kids down, as opposed to parents. What we are trying to do is increase our outreach.”

The pandemic forced the Elks Lodge to limit its activities. Now, members are anxious to begin ramping up efforts to re-engage with the community and recruit new members. George is encouraging anyone interested in participating to take part.

“We’ve had adults who have performed in the past come back and perform in big events,” he said. “As far as kids, we’ve had 2-, 3-, 4-year-olds come to practice until they were big enough to actually play. We’re not going to turn a kid away.”