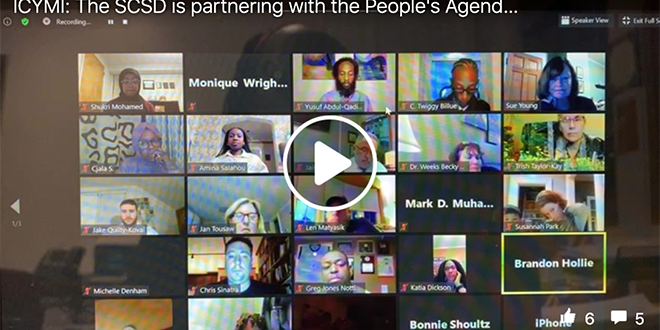 SROs are law enforcement officers stationed inside of schools. A controversial disciplinary method, many lament the presence of SROs in academic spaces, citing them as a source of danger to students — particularly students of color or those with disabilities. Contrarily, those who defend SROs consider them a reliable mechanism to keep campuses free of danger.

The panel began with a discussion of why students can be harmed by the presence of SROs. Abdul-Qadir shared his perspective as the director of NYCLU, as well as a graduate of Syracuse University’s School of Education, as to why SRO’s approach to behavior management can do more harm than good:

“When a student is experiencing a traumatic experience — particularly when they are a student with a disability — that can create the manifestation of the disability in ways that can present sometimes as if the student is being aggressive or being violent, but in actuality is an expression of their disability. What happens …. unfortunately, is that those students are often funneled into what is known as the school-to-prison pipeline.”

After the panelists shared, the floor was opened up to viewers. When one asked in the chat what impact the presence of SROs had on campuses, Amina Salahou shared her experience. Salahou is a current city school district student, and has SROs stationed on her campus:

“An officer would come to our class and for whatever reason, it would always feel really uncomfortable just because of the things we’ve seen happen to other students … Based on the way they have treated students in school it also makes us scared of how they would treat students outside of school.”

When another viewer asked about the need for a trauma-informed approach to behavioral management, Brandon Hollie spoke up, sharing his knowledge on why properly trained counselors and social workers can be crucial in helping students who have grown up in distressed communities.

“I think particularly, especially in places like Syracuse, where crime and violence is so prevalent, what often is trauma starts to look like culture,” said Hollie, who is pursuing doctorate research focused decreasing gun violence in urban communities. “So think about living in an area where shooting, robbery, is prevalent, so when you are walking down the street, you are looking over your shoulder and such, that is anxiety.”

The question and answer period covered a variety of topics, from focusing efforts on students at high risk for trauma, to using SROs as mentors to students, to the concerns of apprehensive parents who still feel safer with law enforcement on campus. As the questions drew to a close, Cherylene “Twiggy” Billue, advocate, author and one of the events’ coordinators, spoke to the importance and history of this dialogue, and the need to continue it.