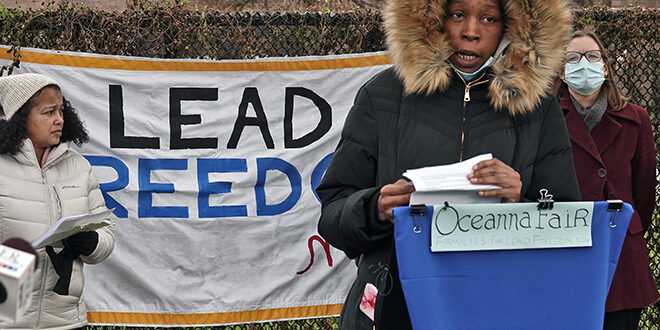 Darlene Medley-Williams of Families for Lead Freedom Now, speaks at a press conference on I-81 Health and Safety, held near STEAM at Dr. Martin Luther King Elementary School. | Mike Greenlar, The Stand

Darlene Medley-Williams first experienced the impact of lead when her twins were poisoned in 2018 by lead dust at the age of 2.

Now, she and her family are one of many residents in Syracuse concerned about the impact of lead poisoning due to the Interstate 81 reconstruction project. Medley-Williams spoke Wednesday about safety and health of community members once construction begins in 2022.

“We need every parent to understand that other parents, like us, are concerned,” Medley-Williams said.

The viaduct demolition could have potentially dangerous levels of lead in paint used on the bridge. For students who attend STEAM at Dr. King Elementary School, parents expressed concern about children breathing in the lead paint dust or collecting it onto their clothing when outdoors.

“We know darn well that the lead paint can be picked up on our kids’ shoes and dragged into our house,” said Medley-Williams, whose children once attended Dr. King.

Lead particles can also be spread through “take home” lead. At a construction site, old paint from the steel structures that likely contains lead can cause harm to anyone who comes in contact with it. According to the New York State Department of Health, a person exposed to lead paint can store lead in their blood, organs and bones and have their nervous, reproductive and digestive systems impacted.

Many construction workers on 81’s future construction project, which has yet no confirmed 2022 start date of yet, will be local and could carry home the lead paint to their children. Those younger than 3 are more susceptible to the toxic effects of lead, and being exposed to small amounts can cause severe illness.

Dr. Sandra D. Lane, a professor of public health at Syracuse University, has worked on lead poisoning research and advocacy for more than two decades. She found exposure to lead can impact a child’s educational success.

According to Lane, as of 2019 only 23% of third graders in Syracuse elementary schools are reading at or above grade level. Lane says that this could partially be due to lead exposure from children residing in older homes with lead paint.

“That is an emergency,” Lane said.

Syracuse already leads other cities in the number of youth poisoned by lead annually. Dr. Marianna Pernia, a member of the Syracuse Peace Council and a local physician, says that the majority of this has come from pre-1978 lead-based paint used in city homes.

“Our best estimate is that over 600 children are poisoned yearly in Onondaga County,” Pernia said. “When the I-81 demolition occurs, our hope is that all necessary steps will be put into place to reduce the potential for harm to the nearby communities and to workers. But we must ensure it.”

Community leaders are hoping for the proper precautions before the demolition of the I-81 viaduct next year. The organization Families for Lead Freedom Now has called upon the New York State Department of Health to minimize health hazards such as dust and noise during construction.

Jeanette Zoeckler, director of preventive services at the Occupational Health Clinical Center, said she is hoping for justice for the community. Additionally, Families for Lead Freedom also gave the New York State Department of Transportation 12 recommendations to adopt prior to construction in hopes to protect the health of workers and families during the project.

“We are raising the question: What is being done to address overlapping vulnerabilities?” Zoeckler said.  “Everyone in the community deserves to be fully protected from environmental contaminants that could emerge from the demolition work.”