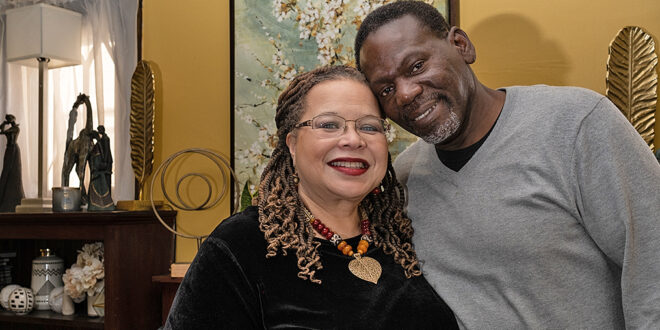 How one couple made Syracuse their home

While traveling on a bus from Binghamton to Montreal on a long weekend during college, Eva Williams says God spoke to her.

“On I-81, the Lord said to me: ‘This is going to be your city; these are going to be your people,’” she says, recalling the premonition that came more than four decades ago, driving past Upstate Hospital along the viaduct.

Just as quickly as it came to mind, it left. Then one day, decades later, the memory resurfaced.

Turning to look at her husband, Lawrence Williams, she adds: “Who we were supposed to be.”

SHE KNEW FROM THE START

In the late ’70s as freshmen at Binghamton University, Lawrence and Eva shared one class.

“Lawrence never knew I was there,” Eva recalls. “He couldn’t discern me from another girl. He never paid attention to me.”

But she was drawn to him.

She told herself: “I’m gonna keep seeking him out, and he’s gonna notice me; one day, he’s going to pay attention.”

Her plan took shape the following year. The two bumped into each other often and spoke in the Student Union. Before that year’s semi-formal dance, Eva traveled to New York City to buy a dress — the one she knew would capture his attention.

“Let me take a wild guess,” says Lawrence, now CEO for Syracuse Community Connections, taking a long look at his wife of 37 years and then turning back to the interviewer. “She’s got favorite colors … I know it wasn’t purple,” to which Eva, who is principal at Van Duyn Elementary School, huffs and shakes her head in the negative.

He finally narrows to two guesses: “It was either black or white.”

With a sweet tone he responds, “I know all I can remember was your eyes.”

Then with a quick look with raised eyebrows, he asks, “How’s that for a comeback?”

With a wide smile and sparkle in her blue eyes, she agrees. It’s a worthy response.

“Her eyes outshine anything,” he adds.

Then he asks, “Really, when you went to buy the dress you were thinking of me? This is the dress that’s gonna do it?”

He surrenders, “What color was the dress?”

He laughs. “Shows you what I know. Pink would have been the last color I’d guess.”

Eva has the last say.

From that night on, they were a couple — college sweethearts.

“Just like that we were fast and furious,” Eva says. “We became one.”

And she knew Lawrence was “the one” after he passed the family test.

“If you can pass my African family test, you’re going to be great,” she says, noting in her Liberian lineage, family is number one. Lawrence immersed himself into her family with ease. “That’s when I knew, we were going to be forever.”

After their graduation in 1982, Eva’s mother handed her a one-way ticket home. But six months later, Eva bought her own ticket back, with a stern adjure from her mother: Marriage had better be on the table.

“We decided, we would be together,” Eva says. A timeline was set, and an understanding was in place.

The proposal was mutual.

“We both were of the same mindset,” Lawrence says. “We knew we can’t play house.”

They married in 1984. America was dry. Jobs were hard to come by. Salaries were low, and the couple lived on a shoestring budget. They used their tax return — the whole $1,200 – to plan a wedding held at her grandmother’s house in Queens.

Her mother made it to the wedding but never returned to Liberia, as the country entered a full-scale war. The home Lawrence and Eva established in Syracuse became a pit stop for escaping family members, before resettling in New York City or the D.C. area.

“Our relationship has been a huge blessing to our family,” Eva says. “We were like a hub for my sisters and then cousins who came over.”

They describe their relationship as a journey — one with memories and celebrated moments revolving around family, many that centered in Syracuse.

“Our core was always the belief of each other,” Lawrence says. “I’m her biggest fan. And she’s mine.”

For both, home has been the foundation. Each agree, if they had settled anywhere else or made a move, things might have been very different.

“We’ve been in this community for a reason,” he says. “This community is part of our love story. It’s helped us in so many ways.”

Here they have raised three daughters — Lauren, Adjuah and Ayanna — and taught them to appreciate their blessings. Additionally, their current Syracuse home has served as a refuge for local children who had issues on the streets.

It may come as a surprise, but the couple tried to leave Syracuse — three times.

At each attempt, the Lord closed the door on the next opportunity.

“Every time we tried to leave, we ended up staying,” Eva says. “That is really part of our story as our couple self. We always had this vision for our lives, of being supportive of each other, of our community, for our values and pushing the agenda for our people, children and those in need. That’s the heart that God gave us, to be people who served. And we may not have been able to fulfill that vision somewhere else.”

Both feel Syracuse has allowed them to thrive.

“If perhaps we had been anywhere else,” Eva concludes, “we would not have learned to stand by each other. We could have failed each other. But being here has allowed us to grow, be strong and to share our collective vision for what we wanted for our family and for ourselves.”

Ashley Kang is the director for The Stand