This Father’s Day was extra special for Jamison and his father because he was celebrating becoming a dad, too.

Q: What did it feel like when you became a father?
A: I fell in love with that child the moment I laid eyes on her. She looked up at me and smiled. That was her first reaction … to smile. And I made the decision right then and there that I would be somewhat of a father-figure if not her father-figure because I was with her mother. I met her when she was a tiny baby, when she was born and next moved into the incubator. She was a preemie, and I was with her mother while she was pregnant. After a month went by, she was finally able to come home. It was very magical to be there during her first moments. 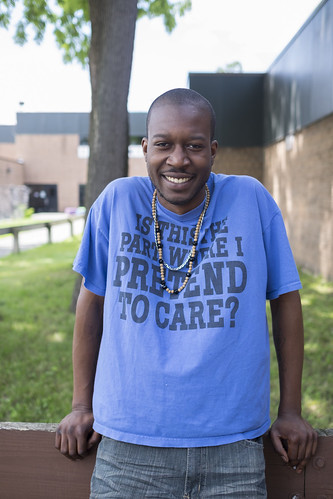 MEET FATHER BEN: Jamison, 21, works with autistic individuals with the Mainstream Program. He is a stepfather and is expecting a baby in October. | Ben Cleeton, Staff Photo

Q: As a father, is there anything you do that would surprise people?
A: The fact that I’m taking care of somebody else’s child surprises people. I get that all the time: ‘Dude, you’re such a good guy. I wouldn’t be able to do that; I don’t know how you are doing that …’ But it’s not somebody else’s baby to me. That’s my baby. She’s here for a reason, and I met her mother at the time I met her for a reason. It is what it is.

Q: What else can you share about your daughter?
A: I love my little one. Her name is Ameerah. She’s so cute. (He pulls out his phone to show off a photo of Ameerah, who is 17 months old.)

Q: What was your relationship like with your dad?
A: My relationship with my dad is awesome. I am very fortunate. If I didn’t have the parents I had, I feel like I wouldn’t value my role as a father as much as my dad did.

Q: Why are fathers important?
A: Fathers are important because a mother can only do so much. I feel like mother is there mainly for the emotional sense of a child and to nurture. With my dad, I could talk to (him) about anything … about girls and just like other stuff … stuff I couldn’t talk to my mom about. I can talk to my dad about it because he knows; he’s a guy.

Q: Is there a saying or advice you always give?
A: One of my dad’s sayings is: ‘Have patience and keep God first, no matter what.’ And he always tells me to ‘take care of my responsibilities.’

Q: What do you think about assumptions held about black fathers?
A: It’s not solely black males that fill that deadbeat role. I have a white friend whose parents are separated, and he barely ever hears from his dad. You can’t solely put that stereotype on one race. That is unfair. Everybody has their own dirt and does things. But the main one is: Black guys don’t take care of their kids; they don’t visit them … I love my kids. Whenever I leave, I miss her. I miss that smile. I miss how she looks at me, and the way she responds when she sees me, and I can see her just brighten up. And I know that I’m not the only black man taking care of his responsibilities. I have a friend who is a father and not with his child’s mother, but he makes time to spend with his son. It’s not about someone’s race. It’s more about how you were raised as a child and what you saw as an example of a father figure. If you don’t have that, you look for it elsewhere, and that’s where the gangs come in and life on the street can creep in.

Q: Any advice for other dads?
A: Be patient. Be patient with everything, especially if you’re a young father like me because me and my girlfriend are still growing as a couple and maturing as human beings. Everybody makes mistakes. Part of being a parent, you have to nurture and you have to set a good example. You won’t always be the greatest dad all at once. You have to keep trying and working at it.

Q: Final thoughts?
A: I challenge all the fathers to do what they need to do. To be responsible. I challenge them to be a leader and be better than their past self. ’Cause I’m trying to change myself every day. You can’t take your anger out on a child. So there’s a lot of growing up and maturity that comes with this. I feel like I was chosen because I had to mature and this was God’s only way of making me mature. And having a child surely did. I made sure I found a job; I see things a lot differently than I used to. It’s humbling. It’s humbling to be somebody’s guardian. I left school for this, so I could come back and be in this little girl’s life and see her face every day.