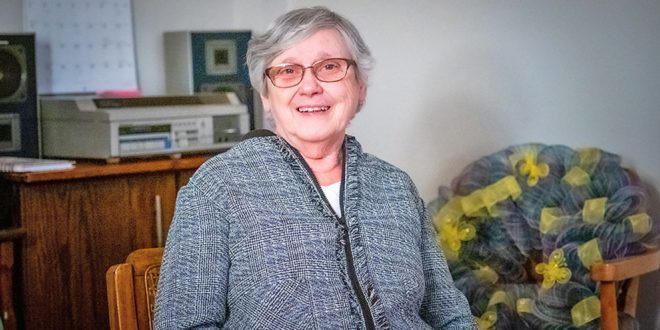 Sister Helen Ann Charlebois said, "to be able to help continue [to serve the community], I'm more than willing to find a new home to live in." | LaTrenda Carswell, Staff Photographer

Three nuns have given up their living space to allow for renovations on Sarah’s Guest House, a nonprofit on Syracuse’s Southwest Side that serves as a haven for family members accompanying a loved one in need of medical care. Sisters Joan Ottman, Grace Quartiero and Helen Ann Charlebois, each over the age of 80, said the gesture was a final gift to the community.

The guest house provides lodging, transportation and meals to patients and families of patients receiving care in Central New York. It sits on the corner of Bellevue and Roberts avenues. Before it was known as Sarah’s Guest House, it was home to the sisters of Most Holy Rosary.

The guest house has split half of Most Holy Rosary Convent with three of its remaining nuns since 2005, paying $1 per year as tenants to offer rooms for rent to guests. In an effort to help the guest house expand and receive grants, the sisters agreed to move from the convent they have served for over three decades.

She refers to the guest house as a ministry because the nonprofit is “following in Jesus’ path of ministering to people in need.”

“Our side was a very big space, and there’s only three of us left,” she said. “We’re certainly not getting any bigger. So, we said it was time.”

The convent was built in 1915 with enough room to house 21 sisters. Charlebois has lived in the convent three separate times and served under three ministries.

She became a sister servant of the Immaculate Heart of Mary in 1967. Later, she taught students ranging from second graders to 12th graders and was a principal for 30 years at multiple parochial schools in the city.

While living in the convent, Charlebois said each sister had their own ministry, but they supported and cared for one another when they lived together.

“We’re all different and we all have our own friends outside of the community, but when we’re together, we’re together for a common purpose and that is to be Jesus’ representatives,” Charlebois said. “But you’re also there for [each other] when things aren’t going well in their personal lives and to support them, their sadnesses and their families.”

The convent’s backyard is what Charlebois will miss most. Although she wasn’t the sister with the green thumb, she loved the lilies, tulips and daffodils that bloomed in the summer — if the deer didn’t get to them first. Charlebois always knew spring was at its peak when the stone wall marking the end of the property would flourish with greenery and wildflowers along with the butterfly tree erupted into full bloom. In the warmer days, the sisters would often hold prayer in that spot.

When the convent split into two to accommodate Sarah’s Guest House, the sisters lost access to the backyard. It was a sacrifice, but one Charlebois felt was necessary for the well-being of the community.

Then, in December 2021, the sisters moved into the rectory across the street from the guest house.

“To be able to help continue [to serve the community], I’m more than willing to find a new home to live in,” Charlebois said.

David Haas, executive director of Sarah’s Guest House, is grateful for the sisters and their decision to move.

“They will tell you that a part of their mission of giving back was to give up their home,” Haas said. “They didn’t have to [move]. They could have said once we have passed on or moved on, you guys can have the building. It was a huge gift.”

Servicing over a thousand people annually, the guest house has been recommended to families receiving medical care at Upstate University Hospital by Dr. Leslie Kohman, a professor of surgery specializing in thoracic surgery and hospice and palliative medicine.

According to Kohman, Upstate is the only academic health center in a 17-county region. It has specialty services that aren’t available at other hospitals. She said Sarah’s Guest House is an essential resource for families and patients going through frequent or daily treatment in Central New York.

“[Upstate] serves many patients throughout a large area,” Kohman said. “Besides the transportation difficulties, a lot of these patients come from rural areas, and our rural New York population is poor.”

Despite minimal costs for a room in the guest house, Kohman added it also allows for families to be together during hard times, an important aspect to a patient’s recovery.

Before being rebranded to Sarah’s Guest House in 2014, Sarah House was founded by Mary Keough in 1994. Keough opened the facility after her nephew was diagnosed with leukemia. He was traveling to New Hampshire and Minnesota for bone marrow transplants and encountered healthcare hospitality homes. That’s when Keough saw the growing need for a home-style stay for individuals and their families who were traveling to receive medical care.

Julie May, a volunteer of Sarah’s Guest House, said she wanted to contribute to the guest house in any way she could after she heard about the nonprofit’s mission.

“I just love being part of something that really is making a difference,” May said. “I can’t even tell you how many times I’ve met up with a person staying here and they’re just in tears because they’re so happy to have found this place.”

May became close with a mother who traveled from Nigeria to take care of her son who had a stroke. May helped her adapt to life in the United States.

“She had to come over here, never even being in America, and I used to take her to the grocery store on Salina Street, and I took her to a hairdresser so she could get her hair done. I totally got so attached to her,” May said. “That’s why this [guest house] is so important.”

The nonprofit remained a tenant to the convent, an arrangement Haas described as a “steal of a deal,” for quite some time. But as a tenant, the organization could not apply for specific grants to help with the upkeep of the property.

“If we wanted to update the bathrooms, it would be on us,” Haas said. “We couldn’t apply for a grant to have those done because anybody would look at us and say, ‘Well, you’re just a tenant.’”

According to Haas, the guest house doesn’t receive state or federal funding. The nonprofit relies on donations from corporations, foundations and individuals. The guest house also had to turn away over 800 guests per year due to limited space.

That’s when Haas and the board of directors of Sarah’s Guest House decided they needed a long-term solution.

As the owners, the nonprofit plans to turn the garage into a new entryway and lobby, update the kitchen, create an exercise space and double the number of bedrooms from 11 to 22.

In addition, a $100,000 grant from the Mother Cabrini Health Foundation will support installation of an elevator to accommodate those who cannot utilize stairs. It is expected to be installed by the end of the year.

Charlebois said the decision to move was an easy one when given the chance to help others. She said all she needs is a roof over her head.

“When you meet guests, they have nothing but good things to say and are grateful that it was there when they needed it,” Charlebois said. “It’s very fulfilling to know that for these number of years, we’ve been able to support [a nonprofit] that Syracuse needs and it’s done in such a loving fashion.”