The Southside Community Coalition met Thursday, May 5, at the New Covenant Baptist Church, 107 E. Beard Ave. to discuss with residents their vision of bringing a Food Coop to the South Side of the city. About 50 residents and members of the group listened as members of the Food Coop committee shared their plans to bring fresh produce and groceries to a neighborhood that has been described in the last few years as a food desert.

The Rev. Colette Matthews of the church welcomed guest with excitement for the project.

“One of my dreams for this neighborhood is to see children walking down the street with an apple in their hand,” Matthews said.

Erin Smith, chair of the Food Coop Committee and member of the SCC board, explained the vision, goals and benefits of the project.

“It’s the community driving the ship but utilizing the resources surrounding us,” Smith said about how the project will be run. The main goals, he said, are to increase access to fresh produce, help to lower the cost of groceries for consumers and to make residents an equal partner in the project.

Like the new South Side Communication Center, located at 2331 S. Salina St., the Food Coop will be jointly supported financially by the community, Syracuse University and other donors. SCC President Joseph Bryant says almost $300,000 has been raised for construction and to start up the project.

Members of the SCC were clear though that this does not mean that the university or the SCC will have any say in how the Food Coop is run. 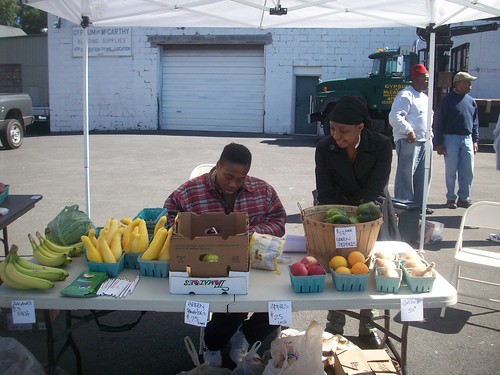 A Food Coop is defined as a small grocery store owned and managed by the consumers. Under this business model, residents pledge $100 to support the start up of the Food Coop. This allows the business to operate at cost, sell goods at the lowest possible price and allow for the consumer to have a voice in how the store is run and what inventory will be sold.

“It is a democracy,” Smith explained. “One member gets one vote.”

At the May 5 meeting, SCC members encouraged residents to pledge $100 and to apply to be a Food Coop committee member, which will allow for their voices to direct the project. The SCC will convene again in two weeks to hold elections for board members of the committee and further discuss plans.

Thus there is an incentive to shop at the Food Coop. Not only do residents keep their money local, but by the end of the year if the project earns a profit, as a part owner, they will too.

The Food Coop has been a four-year effort of the SCC run in three phases. The first phase (see video below) was an effort of the group to increase access to fresh produce. The group’s Store For A Day provided this needed service and also taught the SCC about residents’ shopping habits. This project grossed more than $7,000, according to Smith.

Next, the group held Living Room Meetings. For these members went to the home of a resident who invited 10 friends and neighbors. The resident received $50 for their time, and the Food Coop Committee shared information about the project and learned from residents what they would hope to see.

Now in phase 3, the project is moving forward by obtaining the lot next to the South Side Communication Center to build the Food Coop and begin to form a committee of residents to run the project.

Sekou Cooke, an established architect and assistant professor of architecture at SU, will lead design efforts for the Food Coop.

“What interested me most in the project is the community involvement,” he said.

Cooke, who has belonged to a food coop in every city he’s lived, joined the project five months ago. He shared the time line for development and construction of the building, with a goal of completion by June 2012.

This month Cooke and the SCC are working with the city to wrap up zone issues. Next, Cooke will begin the schematic design, where he puts pencil to paper. By August he plans to have a design ready, which would include input from the new committee.

“The goal is by November that we can break ground,” he said, noting that the foundation must be dug before the first frost.

By next April 2012, construction should be completed, followed by time for training of staff and facility development and then a grand opening by next June 2012.

Joseph Bryant, SCC president, said that the perspective plan is to have four employees — a general manager and three full- or part-time workers.

“These would be living-wage jobs,” Bryant said. “Employees would make $18 an hour and be provided with health coverage.”