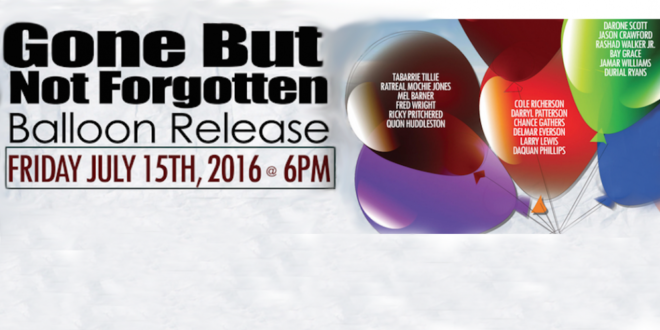 Each balloon in memory of those lost to violence

A former Syracuse gang member is attempting to put an end to gang violence and domestic abuse in Syracuse—despite the fact that he is locked up in federal prison.

Habakkuk Nickens, 30, a former member of the V-NOT gang, is serving a 20-year prison sentence in Ray Brook Federal Correctional Institution in Upstate New York. A jury convicted Nickens for a pattern of racketeering activity, which included acts of murder, drug trafficking and robbery.

While incarcerated he worked for months to plan this weekend’s Cease Fire event, which starts with a balloon release 6 p.m. Friday downtown. The group will meet at the corner of Adams and Salina streets across from the new bus hub. In partnership with O.G.’s Against Violence, Real Fathers/Real Men, Empower Incarcerated Young People, Fall Forward and others, balloons donated with the name of someone who lost their life to violence will be released and community members will speak out against violence. Then on Sunday, local churches will be asked to hold a moment of silence at noon to unite the community and remember young people lost too soon and pray for those who are committing violent acts.

“This is his second year doing this event,” his mother Denise Nickens said this week. She has spent her days and evenings executing her son’s plans to ensure this event is held, describing herself as his foot solider. “His goal is to decrease the violence inside [the prison] and outside.”

Nickens was the driver in a fatal drive-by shooting in 2010, which resulted in the death of 19-year-old Kihary Blue, a former star football and basketball player at Henninger High School.

One balloon released this Friday will be in memory of Blue.

“To the woman who lost her son, I made a vow to do something in my days to repay her and make her smile,” said Nickens, who has also sent a letter of apology to Blue’s mother through the judge who presided over his case. “I figured I wasn’t going to just help her, but help everybody.”

Nickens said he now considers himself a changed man. As evidence, he spoke in an interview of how he founded an anti-gang program, Men Educating Neighborhoods (M.E.N.), in November 2014. The program relies on volunteers, who share his belief that gang violence must be reduced.

“I owe it to my family members, kids and my community, because I know I’m better than that,” Nickens said. “I came in here with the attitude that I’m going to change something.”

Nickens said he first decided to change his ways shortly after Blue’s death. He originally founded a community outreach program called Help Break Down the Silence, with the goal of helping at-risk youth. Although the program was short-lived, Nickens said he’s hoping to continue his community work through M.E.N. His mom said he even ran Mary Nelson’s annual backpack giveaway in 2010. “He was always busy and gave back,” she said. “Mary let him run her event one year and a week later he held his own backpack giveaway, that Mary helped him with.”

His mother remembers Nickens as a teen holding several jobs, writing and performing plays and serving a mentor to younger kids at the Southwest Community Center. She said it wasn’t until his 20s she noticed any bad behaviors and his association with others who’d get into trouble was her biggest concern. She was told his small offenses were guilt by association.

“But God has a plan,” she said, adding that she gets through tough times with the help of prayer. “Prayer changes things.”

Nickens said M.E.N. is different than other anti-violence programs because it gives prisoners, and former prisoners, a second chance to do good, and the opportunity to become a member of the program and help the Syracuse community.

Tyrone Hines, who was sentenced to life in prison in 1995 for running a drug-trafficking ring in Syracuse, said he first met Nickens in November 2014 while in prison. Shortly after, Hines said he became one of the initial members of M.E.N. in an attempt to right his wrongs and try to put an end to the continued rise of violence in Syracuse.

“Even if we save one life, or two lives, it’s working,” Hines said.

Despite being incarcerated, Hines said he has already seen progress in changing people’s lives. Hines said raising awareness about gang and domestic violence is just one part of M.E.N., the other is reforming and recruiting prisoners so that when they’re released, they’re able to help the community they once polluted.

Hines said he has seen several prisoners from Syracuse, who at one point were members of rival gangs and at odds with each other, now work together as proponents of M.E.N.

“A lot of guys here from Syracuse, they weren’t getting along on the streets,” Hines said. “They couldn’t stand to be around each other. But yet, in here, they all act as one.”

Nickens said he and Hines try to help reform their fellow inmates, and better their lives, in several ways, including: setting up self-help programs, helping them with their class work, teaching them basic vocabulary skills and leading bible studies.

“Maybe it was heaven-sent that I’m here, because if I wasn’t, then I wouldn’t be able to help all of these people,” Nickens said.