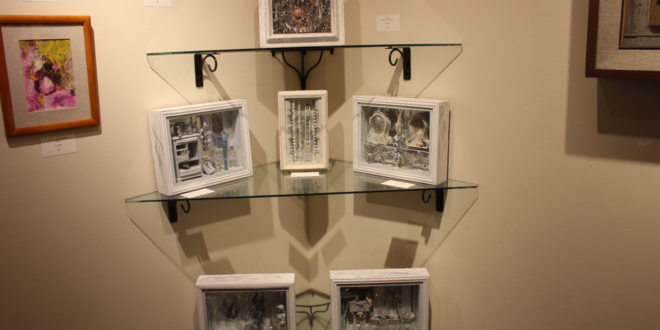 It took two and a half years for Jim Ridlon to create an eclectic collection of nature’s finest pieces of work including inventive assemblages and juxtaposed objects that recreate an interior layer of meaning.

“I’ve always done a lot of walking in the woods. It was a quiet time, thinking time, spiritual time for me. I’ve always found objects in my walks,” Ridlon said. He chose to duplicate his memory of a chicken he saw while walking the markets in France.

Former classmates, students and locals drove from all over Syracuse to experience “Nature’s Market” at Edgewood Gallery Friday, Sept. 30.

Ridlon, 82, has attained much fame through sports and art. After graduating from and playing football alongside the great Jim Brown at Syracuse University in 1956, he played in the NFL for the San Francisco 49ers and the Dallas Cowboys for eight years.

For his significant contributions in football, he was named the second recipient of the Tom Osborne Legacy Award by the Rotary Club of Omaha and the Greater Omaha Sports Committee for his role in college football and demonstrating leadership and citizenship beyond the field in 2015.

He later returned to Syracuse to earn his master’s degree in sculpture. Ridlon was a professor at SU’s College of Visual and Performing Arts, where he taught painting, sculpture and design for 35 years before retiring.

His “Nature’s Market” exhibit included simplistic instruments such as acrylic wax paper, printed plates and pieces of nature from local parks including Green Lakes State Park and Jamesville Reservoir. Attendees entered the gallery to abstract structures hanging on the malls. They entered what seemed to look like an enchanted forest of nature’s wooden art at the back of the gallery.

Longtime friends and colleagues Peter and Leona Forbes were fascinated by his work. “You did some wonderful things with natures forms,” Peter said.

On display were more than 500 woven baskets, each reflective of an image Ridlon saw in the markets. One round, white basket included the stems of pinecones left behind from squirrels.

Cherly Chappel, owner of the Edgewood Gallery, said every six weeks the gallery hosts a showcase by a local artist, with everything from paintings to drawings to sculptures.

The “Reflections” assemblage consisted of broken glass, reminiscent of memories.  Ridlon said he was fascinated by how memories change, saying: bad turn into good. “They are cushioned by time; things get better as you get older. Memories shift according to age and circumstances,” he said.

“Nature’s Market” will be on display at the Edgewood Gallery, located at 216 Tecumseh Road, until Oct. 2