Forum Asks: How Do We Get Best Redesign of I-81?

The future of Interstate 81 remained shrouded in uncertainty following a public forum hosted by the Moving People Transportation Coalition on Thursday night.

Held at the Tucker Missionary Baptist Church, 515 Oakwood Ave., at 7 p.m. Feb. 13, the forum allowed about 50 residents of Syracuse’s various neighborhoods to voice their concerns and questions about the state of I-81. The forum included presentations and a panel discussion held by a director in Syracuse University’s School of Architecture and three members of different transportation organizations. The meeting lasted about two hours. 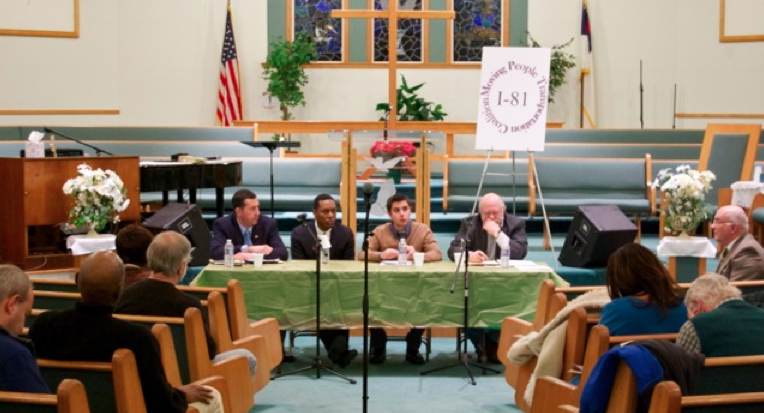 Mark Nicotra, Marc Norman, Andrew Schuster and Barry Lentz speak with Syracuse residents about the future of I-81.

The suggestions discussed during this forum will be given to the Department of Transportation (DOT), said panel moderator Peter Sarver. A representative was at the forum, but Sarver did not make his or her presence known.

“Something has to be done,” said Norman about the state of I-81. “There’s no scenario where nothing happens.” 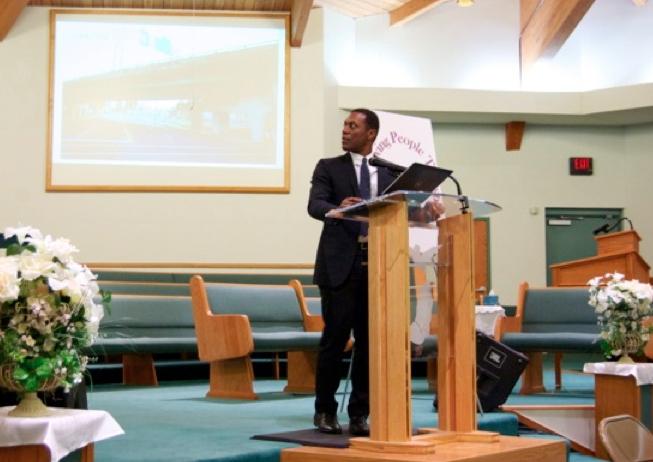 Marc Norman, of the School of Architecture at Syracuse University, talks about an I-81 project that students completed last year.

Norman went on to present findings from a project School of Architecture students worked on. Through different seminars and design studios, the students studied the history of I-81 and precedents set by other cities — ones that tore down highways and others that repurposed them. The students also posed their own questions about the highway.

“We, as citizenry, have the ability to ask these questions,” he said.

Before residents stepped up to a microphone to voice such inquiries, the panelists explained their organizations’ own views on the state of I-81.

Nicotra, town supervisor of Salina, said his group Save 81, wants to keep the interstate as a highway running through the city. Schuster, of Rethink 81, said people should remember that the I-81 debate is more a regional transportation issue, not just about a road. Lentz said the Moving People Transportation Coalition strive to achieve several objectives, such as more normal street grid and preservation of neighborhoods.

“We want to focus on moving people, not cars,” Lentz said.

Afterward, residents raised concerns such as certain neighborhoods being affected, transparency from the DOT and the need for more renderings to help visualize the possible outcomes.

A common complaint among residents was the traffic during events at the Carrier Dome. Mark Watkins, of the Outer Comstock neighborhood, said he was worried that tearing down I-81 would result in Dome traffic being rerouted through his neighborhood.

Resident Arleen Fordock expressed frustration that traffic from Dome events congested the downtown area. She suggested giving the Dome its own access lane off of I-81 so that downtown traffic is not affected and city policemen are not doing more than necessary.

Another gentleman said he was concerned about the air pollution left by idling cars trying to get home from games.

“So the rerouting of traffic — is this project going to be done in such a way where it’s user friendly for everybody?” he asked the panel. Lentz responded by saying his organization is all about making sure the DOT is aware of these questions.

A Syracuse resident voices his concerns about I-81 in front of a panel of members of transportation organizations.

Hawkins stepped up to discuss the issue of mobility. A large percentage of people walk or bus to work; the solution to the I-81 problem should involve mass transit to reduce the number of cars, he said.

In an interview after the forum, Hunter said she would have preferred having a DOT representative present so community members could get answers to their questions.

If community members remain fragmented on the situation, she said, the DOT will make its own decision, which is not ideal.

“My most important issue is that it really involves the community where it will affect it the most,” she said.

Sarver, who moderated the event, said the forum pushed the I-81 conversation forward. This was the first public forum for the Moving People Transportation Coalition, but Sarver said they will host one each month until June.

The next community forum will be held at 7 p.m. Monday, March 31, at the Dewitt Community Room, 148 Sanders Creek Pkwy., in East Syracuse. For more information or if you have questions,  email movingpeoplecny@gmail.com or call (315) 416-6363.

– Article and photos by Maddy Berner, reporting student at the S.I. Newhouse School of Public Communications