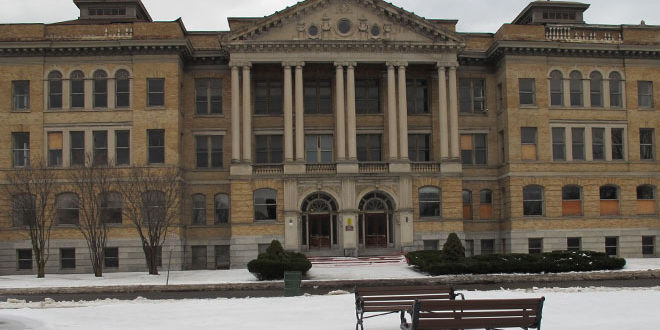 Local leaders all aboard on renovations for
new science-based academy

Reclining in one of the plastic chairs facing the stage of Danforth Middle School, Jeffrey Morey thinks back to his own days as student at Central High School, where he graduated in 1959. Morey fondly recalls performances of the now bankrupt Syracuse Symphony Orchestra playing in the Central High School auditorium, especially the popcorn man stationed outside.

Since Morey graduated, Central High has closed and Syracuse’s percentage of residents living in poverty has crept steadily upward. In 1969, the U.S. Census Bureau reported 14 percent of city residents living in poverty. As of 2017, that number has more than doubled to 32 percent. That poverty is concentrated in 30 urban neighborhoods in Syracuse, a 2015 report by the Century Foundation concluded.

“Poverty, like wealth, brings more poverty,” said Joe Driscoll, a Syracuse common councilor for District 5. “People get caught in cycles, and they start to exasperate each other.

The school system is one of those contributing factors, Driscoll said. While the Syracuse City School District reported a graduation rate of 61 percent in 2016, by December 2018 the state education department announced the possibility of three Syracuse city schools being taken over by an independent receiver. These are schools the state designates as “struggling.” They must make demonstrable improvements to get off the state’s watch list or risk being closed permanently.

Richard Richardson, principal of Danforth, stood under the high ceilings and elaborate white woodwork of the auditorium. “This school is infrastructure that can be used, and should be used,” he said.

Mayor Ben Walsh recently announced a proposal for a new regional school to open in the abandoned Central High School. It will offer a science, technology, engineering, arts and math, or STEAM, program. The school would draw from several Syracuse-area school districts, including suburban and urban areas.

At the February meeting of Tomorrow’s Neighborhoods Today, a group that seeks to improve the quality of life on the South Side, Morey expressed some doubts about the plans to refurbish the school near the South Side corridor. He said he hopes the effort to bridge urban and suburban communities is successful, but said the district should first update existing schools.

Suburban and urban areas of Syracuse have struggled to mend divisions due to the pervasive notions about each community, said Katherine Sojewicz, a representative on Syracuse City School District’s Board of Education.

“We already know that people have a preconceived notion of city children and city education,” she said. “What people say comparing the suburbs to the city shows some prevailing notions.”

Sojewicz said measures to close the divide between schools have been futile, but this STEAM school is different. The school will offer career and technical education programs alongside an arts education. It will strive to host a diverse student population, including spots for suburban students to enroll. Sojewicz said if she were a suburban parent, she would take full advantage of the opportunity.

Charles Pierce-El, president of the Southside Community Coalition, said there is no reason the school should not open. Education flourishes in a diverse environment, Pierce-El believes. He said he hopes the new school is successful. Empowering children to experience different cultures and nationalities, he added, can prevent prejudice.

It is a burden to break cycles of poverty that are compounded by a range of factors, but improving education is a good place to start, said Jim Dunaway, head of school at Manlius Pebble Hill.

MPH was ranked as the third best school in central New York for STEM, according to Niche, a school ranking website.

Dunaway said the success of his school is in part thanks to its tuition rate, which ranges from approximately $13,000 to $24,000 per year. Those funds go toward hands-on projects, field trips and motivated educators. He acknowledged the high tuition can be daunting for low-income families. Nearly 40 percent of students at MPH receive financial assistance through scholarships or a flexible tuition program, according to the school’s website.

Inequality doesn’t end when students graduate either, Dunaway added. There is a direct link between SAT scores, college admissions and family income, he said.

“My wife and I make a good income, and my children are smart,” he said. “But had my children been in another family, without the advantages they have, including SAT prep courses, they might not have been able to get into these competitive colleges.”

Government officials, education commissioners and South Side community leaders alike said they shared the belief that improving and diversifying education is one way to disrupt the rampant cycle of poverty that has beleaguered Syracuse.

“Your castle is what you make of it if you’re doing the right things,” Pierce-El said. “Your children and our children should be together.”