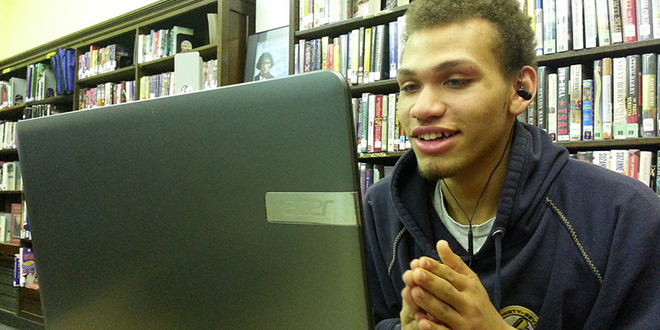 Syracuse considers how to provide better Internet in the digital age

Nathan Mills spends as much time as he can every day at Beauchamp Branch Library. But Mills does not come for the books; he comes for the Internet.

Mills, 20, lives at home and his family recently had to shut off its Internet and cable. So every day he goes to the library to do what most 20-year-olds do: listen to music, play games online, surf the Internet and entertain himself.

But it’s more than that. He’s studying for his GED, and Internet access is crucial.

“I know that many people rely on public Wi-Fi,” Mills said. “There’s few who do have (Internet access) at home. Those who do, have it under lock and key,” he added.

Mills is one of many Syracuse residents who rely on the city branch libraries for Internet and who don’t have access to it at home. In 2014, the computers at Beauchamp Branch Library alone had 25,271 sessions.

A session is defined as use of a computer for a half hour or more. On average, that’s 81 sessions a day, six days a week. (The library is closed Sundays.) It can be especially important for the African-American community, where Internet penetration is catching up via mobile, but still substantially lagging for broadband. 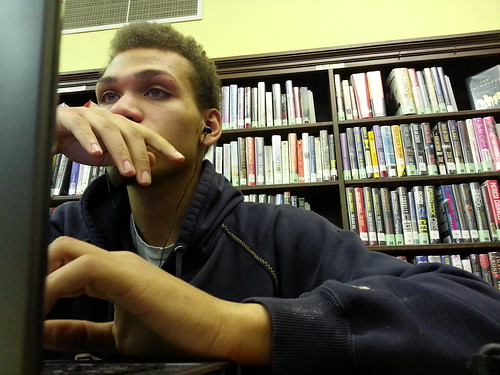 Nathan Mills, 20, goes to the Beauchamp Branch Library every day to use the Internet to study for his GED. | Jake Cappuccino, Staff Photo

With so many people like Mills clamoring for what has become as much a public utility as the telephone, and with Verizon’s decision not to install its uber-speed FiOS service in most of the city, Syracuse city hall is considering doing it itself.

Syracuse Mayor Stephanie Miner first mentioned the idea of the city as provider in August 2014, and she made the point again in her January 2015 State of the City address. She’s hiring a consultant to complete a feasibility assessment for a city-owned broadband fiber optics network.

Why fiber over cable? It’s faster and tends to be cheaper to install and maintain.

These advantages all stem from the cable used in fiber optics, which is made from glass. Data moves through the glass cable in the form of pulses of light. That, combined with much less interference, makes fiber outrun traditional cable Internet, which travels through a copper wire. Fiber also offers equal upload and download speeds, frequently not the case with cable.

“(Fiber) is superior in every way,” said Christopher Mitchell, the director of the Community Broadband Networks Initiative with the Institute for Local Self- Reliance. “It has much higher capacity connections, it’s cheaper to run and more reliable with tremendous benefits.”

Businesses, schools and citizens would benefit from fiber optics.

El-Java Abdul-Qadir, manager of the South Side Innovation Center

El-Java Abdul-Qadir, manager of the South Side Innovation Center, said there’s no argument about that. It’s all good, in his view. At the center, just a few blocks south of the library where Mills studies, businesses are trying to chart a beginning, much as Mills is. If he gets that GED, the center could be home to his small office of the future, or to his employer. The center already is home to about 20 small businesses that might not other- wise be able to access critical start-up resources such as costly office space — or the ultimate-speed Internet.

Outside of Syracuse, a few U.S. cities have already implemented plans similar to Miner’s, and the return on the investment has been huge. In Tennessee, Chattanooga’s city-owned Electric Power Board, or EPB, is the most widely known example — and for good reason. Today, consumers and businesses there have Internet speeds among the fastest in the United States, receiving speeds as high as 1,000 Mbps (with the lowest around 100 Mbps). Consumers can watch their Netflix faster, sure, but this kind of reliable high-speed service offers big incentives to businesses to grow, relocate and develop in Chattanooga. For those reasons, reception has been very positive, said Danna Bailey, EPB’s vice president of corporate communications.

Another city, Wilson, North Carolina, did the same thing as Chattanooga. The city developed its own cable, phone and Internet company called Greenlight. Because of Greenlight’s ultra-fast Internet speeds, it is experiencing the same benefits that Chattanooga experienced, said Jennifer J. Lantz, executive director of the Wilson Economic Development Council.

“It’s one of the quietest things you can do that has tremendous impact. Schools, churches, hospitals, business, government, people at home, everybody is impacted by it,” she said.

C. Bruce Rose, the mayor of Wilson, said he’s thankful for how well the project turned out and that he wouldn’t change a thing if he were to do it again.

“If (cities) want to attract industry and business to their community, they need this. People are looking for it. It’s fast and it’s good and it drew business and industry to our community,” he said. Not only that, but more and more of the city’s consumers and infrastructure, like hospitals, offices, businesses and 26 schools, are switching to Greenlight because of the high speeds. “We got about 8,000 customers now and they’re growing every day and more and more people are clamoring for it,” he said.

But then there’s the money. The plans for both cities cost a lot.

Chattanooga paid for its plan with municipal bonds costing about $229 million and a loan from its electrical division for about $50 million. The city also used a grant from the Department of Energy for $111 million to update its power grid, about $390 million in total. Wilson, a smaller city by population than Chattanooga and Syracuse, borrowed $35 million from local banks to pay for its plan.

A city-owned fiber optics network would cost Syracuse at least as much as Wilson’s network, and the money just might not be there. In a Feb. 4 visit to Syracuse, Gov. Andrew Cuomo said he would not use state money to fix Syracuse’s aging infrastructure and that Syracuse needed to develop its economy first, according to Syracuse.com. Miner had asked for about $850 million.

If Syracuse tackles fiber, it could roll the service out over time and spread the cost over six to eight years. A faster debut, in half the time, would cost a little more, said Stacy Mitchell, the co-director at the Institute for Local Self-Reliance. He acknowledged that from the customer’s perspective, the bill for super-fast fiber might well be a few dollars higher. In the end, the provider can’t lose money, whether it’s the city or a corporate giant. And if Syracuse jumps in, the network is going to run at a loss the first few years, Mitchell added.

But, he reminded: “The real benefit is better environment for business and higher quality of life.”

It would be a large undertaking and a large investment from the city, but officials in Wilson and Chattanooga say their networks are enrolling more people than they need to manage their loans.

Chattanooga’s Bailey concludes: “If Chattanooga can do it, other communities can do it.”